At a ceremony conducted on July 1 at the shipyard in France, good luck coins were placed on the first block of the new cruise ship. The ship’s first sections, a 948-ton steel block, consisting of a portion of the bow with the thrusters and forward sections of the ship have been placed in the drydock with assembly now officially underway. In April 2022, Royal Caribbean marked the first steel cut for the new vessel by announcing her name.

“Today, we are celebrating with Royal Caribbean International an important tradition and milestone for Utopia of the Seas,” said Laurent Castaing, General Manager of Chantiers de l’Atlantique. “The construction of Utopia is an exciting opportunity for the Chantiers de l’Atlantique teams that are aiming to make this cruise ship one of the most environmentally friendly ships in the world equipped with new generation dual-fuel engines.”

The sixth cruise ship of the Oasis class and the fourth to be built in France, Royal Caribbean elected to redesign the vessel before construction to incorporate the LNG-fueled power plant. Royal Caribbean Group is moving toward LNG, having first ordered three cruise ships from Meyer Turku that will use the fuel as well as recently starting construction on a smaller, luxury cruise ship, the Silver Nova, for its Silversea Cruises brand that will also use LNG as its main fuel. 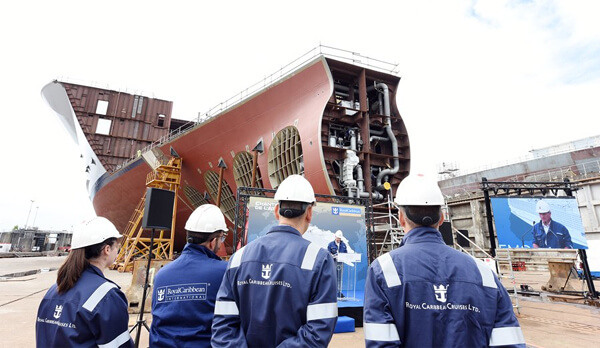 The new Utopia of the Seas also becomes the third LNG-fueled cruise ship built at Saint Nazaire, with the yard recently completing sea trials on the MSC World Europa which will enter service this fall. The cruise industry is moving quickly to adopt LNG with as many as a quarter of its newbuild orders slated to use LNG.

Like others in the industry, Royal Caribbean is also adopting other already-established environmentally friendly initiatives on its ships. From shore power connections to waste heat recovery systems, the applications have been developed and are part of Royal Caribbean’s efforts to a clean-energy future.

“The keel laying for Utopia of the Seas represents the first milestone of an incredible ship and the next step toward a bolder, thrilling future for Royal Caribbean and vacations,” said Michael Bayley, president and CEO, of Royal Caribbean International. “Utopia’s debut in 2024, on the heels of Icon of the Seas setting sail in fall 2023, will build on a new, exciting chapter.”

Official details on the new cruise ship remain closely guarded by the company. The new ship will be the same length, 1,187 feet, and approximately the same gross tonnage, 236,857 gross tons, as the previous member of the class, Wonder of the Seas, which entered service in March 2022. Comments made during the steel cutting ceremony, however, hinted that Utopia of the Sea will have a slightly reduced passenger capacity to accommodate the LNG power plant. The Wonder of the Seas has a total passenger capacity of 6,998 people and has a complement of 2,300 international crewmembers.

Delivery of the sixth vessel of the Oasis class is scheduled for late spring 2024. She will be proceeded by Royal Caribbean’s first LNG-powered cruise ship, the Icon of the Seas, which is scheduled to enter service in the fall of 2023. Two Icon class sister ships will follow, but currently Utopia of the Seas is the last Oasis class cruise ship that the company has on order.