The Republic of Armenia has become the latest Member of the IMO, following the deposit of an instrument of acceptance of the Convention on the International Maritime Organization with the Secretary-General of the United Nations on January 19. 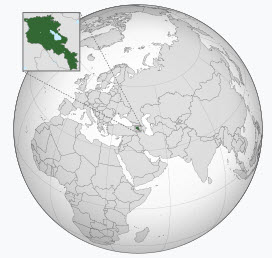 With the acceptance of the Convention by Armenia, the number of IMO Member States stands at 173, with a further three Associate Members.

A Bit of IMO History

In 1948, an international conference in Geneva adopted a convention formally establishing IMO (the original name was the Inter-Governmental Maritime Consultative Organization, or IMCO, but the name was changed in 1982 to IMO).

The IMO Convention entered into force in 1958 and the new Organization met for the first time the following year.

The purposes of the Organization, as summarized by Article 1(a) of the Convention, is "to provide machinery for cooperation among Governments in the field of governmental regulation and practices relating to technical matters of all kinds affecting shipping engaged in international trade; to encourage and facilitate the general adoption of the highest practicable standards in matters concerning maritime safety, efficiency of navigation and prevention and control of marine pollution from ships." The Organization is also empowered to deal with administrative and legal matters related to these purposes.

IMO's first task was to adopt a new version of the International Convention for the Safety of Life at Sea (SOLAS), the most important of all treaties dealing with maritime safety. This was achieved in 1960 and IMO then turned its attention to such matters as the facilitation of international maritime traffic, load lines and the carriage of dangerous goods, while the system of measuring the tonnage of ships was revised.

But although safety was and remains IMO's most important responsibility, a new problem began to emerge - pollution. The growth in the amount of oil being transported by sea and in the size of oil tankers was of particular concern and the Torrey Canyon disaster of 1967, in which 120,000 tons of oil was spilled, demonstrated the scale of the problem.

During the next few years IMO introduced a series of measures designed to prevent tanker accidents and to minimize their consequences. It also tackled the environmental threat caused by routine operations such as the cleaning of oil cargo tanks and the disposal of engine room wastes - in tonnage terms a bigger menace than accidental pollution.

The most important of all these measures was the International Convention for the Prevention of Pollution from Ships, 1973, as modified by the Protocol of 1978 relating thereto (MARPOL 73/78). It covers not only accidental and operational oil pollution but also pollution by chemicals, goods in packaged form, sewage, garbage and air pollution.

IMO was also given the task of establishing a system for providing compensation to those who had suffered financially as a result of pollution. Two treaties were adopted, in 1969 and 1971, which enabled victims of oil pollution to obtain compensation much more simply and quickly than had been possible before. Both treaties were amended in 1992, and again in 2000, to increase the limits of compensation payable to victims of pollution. A number of other legal conventions have been developed since, most of which concern liability and compensation issues.

Cruising made an unexpected first return to operations not with ocean-going vessels, but instead with river cruising in Europe. Nicko Cruises headquartered in Germany launched the first cruise with its vessel the nickoVISION boarding passengers on June 1 for a cruise from Straubing along the Danube and Rhine rivers to Dusseldorf. While the cruise marked an important first step for the industry, the companies are still finding themselves navigation a challenging environment with varying rules and regulations. According to Nicko...

A study from the United Nations Conference on Trade and Development (UNCTAD) finds that total commodity exports to China could fall dramatically as a result of the coronavirus crisis. Citing the dramatic drop in demand for energy products, ores, and gains as the factors impacting total exports to China, the UN report raises concerns for economies that rely on exports of primary goods. Global exports of commodities to China, the study projects, could plunge by nearly half in 2020 to...