All Ports in the Bahamas Have Reopened

While the slow-moving nature of Hurricane Dorian devastated Grand Bahama and Abaco, all ports have reopened and business is fully operational in Nassau - the second-most populated cruise destination in the Caribbean.

As of Sunday at 9 a.m. U.S. Coast Guard crews have rescued 308 people in the Bahamas since the Hurricane Dorian response began. The Coast Guard is conducting air operations based out of Andros Island, Bahamas. Five MH-60 Jayhawk helicopters are conducting search and rescue missions, area assessments and providing logistical support. Five Coast Guard cutters are providing hurricane response support in the Bahamas.

Equinor has announced it will clean up the spills from the South Riding Point oil terminal in the Bahamas. Resources are being mobilized as quickly as possible. The South Riding Point oil terminal sustained damage from the hurricane, and oil has been observed on the ground at the terminal site and in neighboring areas. The size of the spill is not yet clear.

Based on current visual assessments, there are no indications of continued oil leakage from the tanks or of oil spills from the terminal to sea or beaches. Equinor has secured vessels and equipment for oil spill response in Port Fourchon, Louisiana, and from various ports across southeast Florida. The equipment mobilized includes skimmers, oil containment booms, absorbents, pumps, pressure washers and boats. 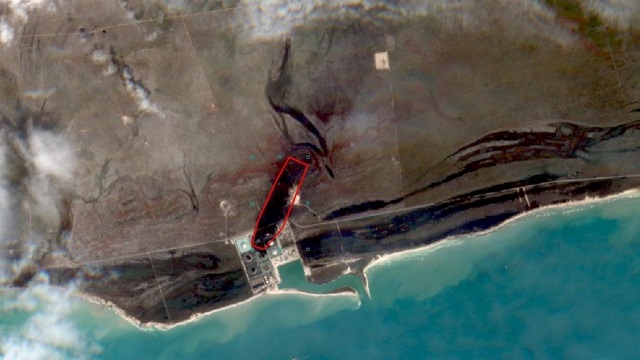 Satellite image after the impact of Hurricane Dorian on the South Riding Point oil terminal at Grand Bahama Island. The red outline denotes the plume area of the oil spill, about 0.5 square kilometers and about 1.3 kilometers in length. (Photo: ESA Sentinel-2 satellite)

Member lines of the Florida-Caribbean Cruise Association (FCCA) have committed more than $5 million in donations. Carnival Corporation's philanthropic arm, Carnival Foundation, and its nine global cruise line brands together with the Micky and Madeleine Arison Family Foundation, have pledged to donate $2 million in funding and in-kind support for relief efforts in The Bahamas.

A portion of the combined pledge will immediately go to support efforts being managed by Direct Relief, an international humanitarian organization that provides critical medications and supplies during emergency situations. In addition, Carnival Corporation and its brands are working together with local officials, community leaders and key relief and recovery organizations to identify the most timely and urgent relief needs and immediate allocations for additional funds and support.

Separately, the company has launched an effort to collect and deliver food and supplies donated in Broward, Miami-Dade and Palm Beach counties for the people of The Bahamas, through a partnership with Tropical Shipping and The Bahamas National Emergency Management Agency (NEMA).

Norwegian Cruise Line Holdings (NCLH) - including Norwegian Cruise Line, Oceania Cruises and Regent Seven Seas Cruises - has relaunched Hope Starts Here, the company's hurricane relief campaign in partnership with All Hands and Hearts, and pledged a minimum commitment of $1 million dollars toward immediate short-term relief for those affected by Hurricane Dorian. It has also vowed to match donations dollar-for-dollar to assist with rebuilding efforts across the Bahamas, including debris cleanup and removal and the delivery of supplies and temporary shelters.

NCLH is also coordinating with local Bahamian authorities to bring needed provisions to the affected areas. Norwegian Breakaway departed Miami with hurricane relief supplies donated by NCLH and its employees, in addition to items collected by the City of Miami, Baptist Health South Florida, the 305 Gives Back foundation, and other Miami-based organizations, to be delivered to Nassau, Great Harbor Cay, the company's private island Great Stirrup Cay, Bahamas.

Royal Caribbean Cruises Ltd. - including Azamara, Celebrity Cruises and Royal Caribbean International - has committed $1 million, with an additional $100,000 to be donated by ITM Group, its partner in the Holistica joint venture that is developing the Grand Lucayan resort in Freeport, while also pledging to match donations by guests and employees to PADF and use its ships to deliver supplies such as generators, water, cleaning supplies, clean sheets and towels.

The Walt Disney Company, led by Disney Cruise Line, has made a commitment of more than $1 million to help relief and recovery efforts in The Bahamas - including, but not limited to, a $1 million donation to non-profit relief agencies who will be undertaking recovery and rebuilding efforts, as well as the provision of supplies such as food staples and basic construction materials to those in impacted areas. Additionally, Disney employees with immediate needs in The Bahamas will have access to a range of resources. Disney Castaway Cay, Disney's private island in The Bahamas, employs more than 60 Bahamians from Abaco and Grand Bahama, as well as several employees from other Bahamian islands.

MSC Group - the parent company of MSC Cruises - has pledged support from across all its businesses for Hurricane Dorian relief in The Bahamas. In addition to providing and delivering goods of primary necessity, MSC Group's efforts will initially focus on semi-permanent prefabricated modular housing for the population as well as making available MSC geared ships for cargo relief service from the U.S to The Bahamas.