Activists are continuing in their efforts to target the flow of Russian oil products and through protests and the support of dockworkers have been successful in their efforts to have tankers carry the products turned away from European ports. Shunned, the vessels have been left at sea as their owners work to make arrangements to land their cargo.

Overnight, Greenpeace is claiming another victory in its ongoing protests to disrupt shipments of Russian oil products. While the U.K, EU, and most of Europe have closed their ports to Russian-flagged vessels, the sanctions exempt other ships carrying Russian oil products. The U.K., for example, committed to ending its Russian oil imports by year’s end, but not satisfied the activists have been working to block individual vessels in protest.

Greenpeace launched a tracking application that publishes updates as tankers depart the Russian terminals and uses AIS data to show the ship’s movements. According to the group, they have tracked nearly two million barrels of Russian oil, worth approximately $270 million, in imports to the UK in the first two months after Russia invaded Ukraine.

Using the app, Greenpeace protestors tracked the Greek flagged product tanker Andromeda after its departure from the Primorsk terminal in Russia on May 10 loaded with what they said is 33,000 tons of Russian diesel fuel. They timed their protest to reach the Navigator Terminals near Tilbury, UK shortly before the 39,000 dwt tanker’s scheduled arrival near midnight last night. 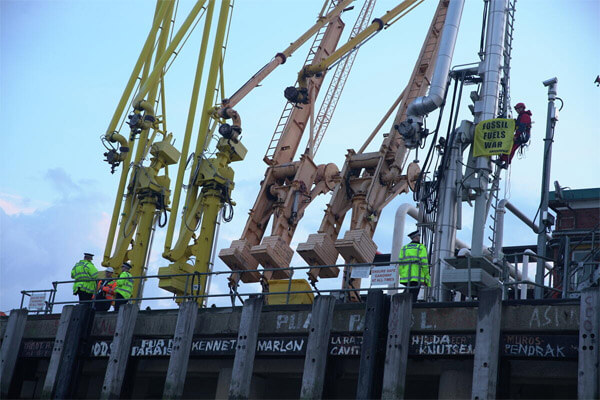 “Eluding security, 12 Greenpeace volunteers reached the Andromeda tanker’s intended berth at Navigator Terminals by boat late last night and climbed onto it,” Greenpeace said in a statement. Some of the protestors were sitting on the terminal’s wharf, others were hanging from the terminal blocking the offloading pipes, and they hung banners reading “Oil fuels War,” and “Fossil Fuels War.”

Local police confirmed they were called to the terminal shortly after 11 p.m. with reports from the operator of trespassers. Greenpeace says that the tanker approached the terminal on the Thames but according to its tracking data made a “U-turn” and the latest data shows the tanker remaining offshore at anchor.

“Campaigners are calling on the UK government to stop funding Putin and Russia’s war in Ukraine and end our fossil fuel dependence,” wrote Greenpeace in its statement. They contend that the UK currently relies on Russia for 5 percent of its gas imports, 8 percent of oil imports, and 18 percent of its diesel, despite Business Secretary Kwasi Kwarteng's pledge to phase out the import of Russian oil.

“Putin invaded Ukraine nearly three months ago, and yet fossil fuel money from the UK is still funding his war chest,” said Georgia Whitaker, oil and gas campaigner at Greenpeace UK. “Ministers have kicked a ban on Russian oil imports to the end of the year despite strong public support for it.”

As of Monday morning, local police reported that they had arrested eight of the protestors, but Greenpeace contended that others remained in place. The police said they were working to safely remove the additional protestors. Later in the day, the police say a total of 15 people had been arrested on charges of suspicion of aggravated trespass

It is unclear if Andromeda will make another attempt to dock at the terminal in the southeast UK. Another tanker, the Sunny Liger, 75,000 dwt flagged in the Marshall Islands, transited the Gibraltar Strait late on May 14 attracting local attention. The tanker also carrying Russian diesel was turned away from Sweden in April, lingering in the Baltic before attempting to dock in Rotterdam only to be turned away again. The Government of Gibraltar said that despite the vessel’s AIS showing it was heading to their port, they would also refuse to land the tanker and its cargo if it approached Gibraltar. The tanker is currently underway in the Balearic Sea near Barcelona, although its AIS continues to say its next port is Gibraltar.