The National Union of Seafarers of Peninsular Malaysia (NUSPM) is highlighting the desperate situation for 12 Vietnamese seafarers stranded on their vessel in Malaysia. The product tanker Viet Tin 01 has been laying abandon by its owners since mid-March leaving the crew without their pay or supplies.

Desperate for attention, the crew took to painting messages for help on the hull and superstructure of the vessel. They painted the words, Help Us. No Food. No Salary on the hull. 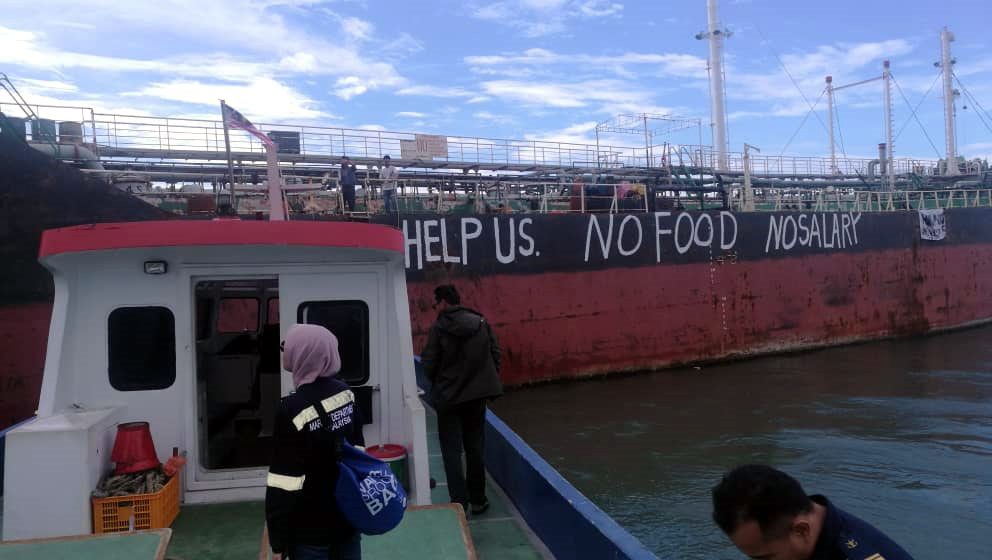 The crew also used a communications app that altered the NUSPM to their dire condition. The union along with the Malaysian Maritime Enforcement Agency boarded the vessel on June 23 to inspection conditions and provide the crew with emergency provisions, including rice and dry food. According to the NUSPM, during the visit, they learned that the vessel has been abandoned by its owner and that the crew did not have fuel or power onboard. Not only is the crew living in horrible conditions, but the lack of lights is also creating a navigational hazard said the union.

NUSPM is attempting to make contact with the vessel’s registered owner while they are also calling on the Vietnamese government to intervene to repatriate its citizens. As a signatory of the Maritime Labour Convention, the union says Vietnam has an obligation to act to provide for the wellbeing of the crew members. In light of the current global public health crisis, the NUSPM says that the crew members must receive their back pay due to the difficulties they will have in finding future assignments in the current environment. Further, because the crew has not been paid, they have no means to even hire a boat to bring them to shore.

Unfortunately, it is not the first time the Viet Tin 01 has been in a difficult situation. In December 2019, the Malaysian officials cited the ship for anchoring without authorization in an unsafe location. The Malaysian Maritime Enforcement Agency later boarded the ship via helicopter where they found only a 61-year-old engineer onboard who told them the ship had drifted into that position. The Malaysians later arranged to tow the ship. That incident took place after the Viet Tin 01 was reported to have been detected by AIS in the port of Nampo possibly trading in petroleum products with North Korea in violation of the UN sanctions.