“2020 has proven that nothing can be taken for granted,” says S&P Global Platts Shipping. In a new report entitled “Changing Track,” the market analytics firm looks at the outlook for the shipping industry in Q4 and beyond.

Platts says, “The fourth quarter of the year is often cited as a traditionally strong period for spot freight markets.” They note that tanker and LNG markets can benefit from increased demand with the onset of winter in the northern hemisphere, while dry bulk responds to increased coal shipments and gains after the harvest. At the same time, historically the winter holiday season leads to increased volumes for container freight carriers.

“Expected seasonal upturns in freight markets,” Platts warns, “should always be treated with caution.” Other factors are influencing markets, which they report make predictions far from straightforward.

Looking at the factors at play in the market segments, Platts highlights that the tanker sectors have been especially hard hit by low demand coming from the global lockdowns and changes in global trade. Also, production issues and the crude oil price war combined to create dramatic changes in the market. Even the lowest order book in years for new tanker construction has not provided significant relief near-term.

While Platts believes that normalized oil production and demand in the fourth quarter will maintain freight rates stable at slightly higher levels, they nonetheless forecast renewed interest in floating storage amid the supply of unsold barrels. “Bearish tanker markets are likely to roll over to the fourth quarter amid limited signs of recovery in oil prices and structural oversupply weighing on spot markets,” predicts Platts. 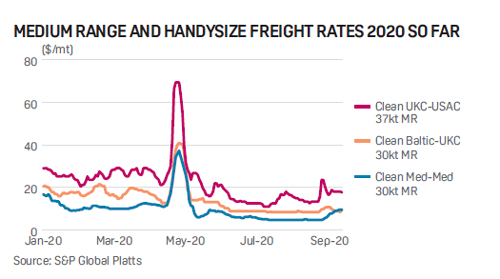 Similarly, uncertainty about demand for refined oil products given the possibility of further COVID-19 lockdowns is seen as overshadowing what is traditionally a strong end of year for clean tankers. Freight rates for the market were depressed for large stretches of the third quarter due to high inventories and lackluster downstream demand according to Platts.

The prolonged periods of low rates for clean tankers pushed many shipowners’ earnings into the red. With uncertainty about the outlook for the markets, Platts notes that shipowners remain conservative expecting slimmer volumes than previous years.

After a period of excess capacity in the chemical tanker arena in 2019, Platts says that this year continued to be a precarious one for owners. However, given the stability of demand from end-users, one shipbroker told Platts the chemical tanker market has observed less volatility than those of clean and dirty products. With more resilience in demand, Platts reports that the hope is for stronger results for chemical tankers at the end of the year.

LNG carriers are experiencing a nearly three year low for spot shipping with sentiment turning bearish due to supply disruptions in September. However, Platts believes that spot rates will be rising. They predict the market will increase gradually.

Unlike the tanker sectors, container carriers have experienced strong rates leading up to the fourth quarter due in part to their efforts at careful capacity management and the use of void sailings. A spike in demand starting in July and August as manufacturers and retailers sought to restock, while also dealing with increased demand for goods such as PPE and home-working equipment, contributed to the rates. It also created logistical challenges such as a shortage of containers.

Platts reports that market sources are split on the direction for freight rates for the remainder of the year. While there is a sense that rates might remain level, there is also a prevailing view that the demand spike is expected to be short-lived.

Finally, in dry bulk, there are concerns about the oversupply of tonnage, lackluster coal markets, and weakness in the grain markets, especially in the Black Sea. However, China’s demand for grains has shown no sign of weakening contributing to increases in exports and high voyage rates. The coal market in the U.S. was perhaps the most server casualty of the coronavirus pandemic, says Platts, forecasting that coal voyage rates may remain subdued for some time to come.

Marine fuel and the progress to future fuel sources will have one of the greatest impacts on the future performance of the shipping markets. Platts quotes Euronav’s CEO Hugo De Stoop who pointed out that the concept that shipping would run on a single fuel is a thing of the past.

Near term, Platts sees competition between LNG with the emergence of methanol assuming the upcoming IMO approval. Methanol has advantages, including being easier to handle and the ability to refit existing ships However, Platts highlights the cost considerations and supply concerns, plus the fact that neither fuel meets the IMO’s emission goals. They point to the potential of synthetic or renewable methanol noting, however, the current concerns over availability and price.

In S&P Global Platts Analytics’ long-term outlook, non-petroleum marine fuels account for 11 percent of total bunker demand by 2040, with almost all of this accounted for by gas-based fuels. They note that the sector is reaching the limits on fossil-fuel improvements, predicting ammonia is shipping’s solution for the future.

The coronavirus has undoubtedly caused substantial disruption to the shipping industry, Platts concludes. With an uneven recovery, they however caution that traditional seasonal upturns may not produce the expected results for the remainder of 2020. Longer-term they believe shipping is looking for new opportunities under drastically changed economic conditions.

This article is written by S&P Global Platts.