Bunkers remain a huge proportion of the day-to-day running costs of vessels across many sectors at this time given continued high flat prices combined with economic and geopolitical challenges in the world today.

The recent Integr8 Fuels Bunker Quality Trends Report drawing on 35,000 samples globally in the last six months identified a number of trends of concern across the world for both quality and also some hidden factors that are often overlooked, but which can have significant effects on a buyer’s balance sheet over time.

Fuel quality in general is very good, however, it is very important to concentrate on the pockets of off specs for parameters critical to operability, namely compliance matters relating to Marpol Annex VI (Sulphur) and SOLAS (Flash Point) along with other parameters that can cause significant damage to vessels if unchecked, such as Aluminium and Silicon, or Total Sediment Potential (TSP).

Fig 1 Types and frequencies of off-specification incident by grade

Fig 1 above shows that we are far more likely to receive a notification relating to compliance matters for VLSFO and MGO than HSFO.  However, in real terms, the levels of non-compliance remain quite low with both being less than 1%.

However, when we look deeper into compliance and concentrate on VLSFO, bunker hubs tend to fair significantly worse than more remote locations, this almost inevitably as the result of blend give-away being minimized further given the widening crack between predominantly distillate Cutter stocks and their residual counterparts. This in itself has resulted in Average Sulphur for VLSFO increasing from 0.47 to 0.49 in ARA ports (Amsterdam, Rotterdam, Antwerp) which naturally increases the risk of a fuel testing at 0.51% or above.

This can be seen from Fig 2 below where ARA ports fare far worse than the rest of the world for Sulphur non-compliance but also interestingly when compared to the biggest market in the world, in Singapore.

Drilling further into ARA, a trend within a trend appears in that when referring to one anonymized supplier below (Fig 3), we note that in the case of August 22 we have strong grounds to believe that 10% of all deliveries were non-compliant and almost 30% of all samples potentially non-compliant. To conclude, almost 40% of all supplies of VLSFO may result in non-compliance when considering data related to this anonymous supplier in ARA.  On the other hand, examples are available of other local suppliers with not a single sample testing off specification in the same period. 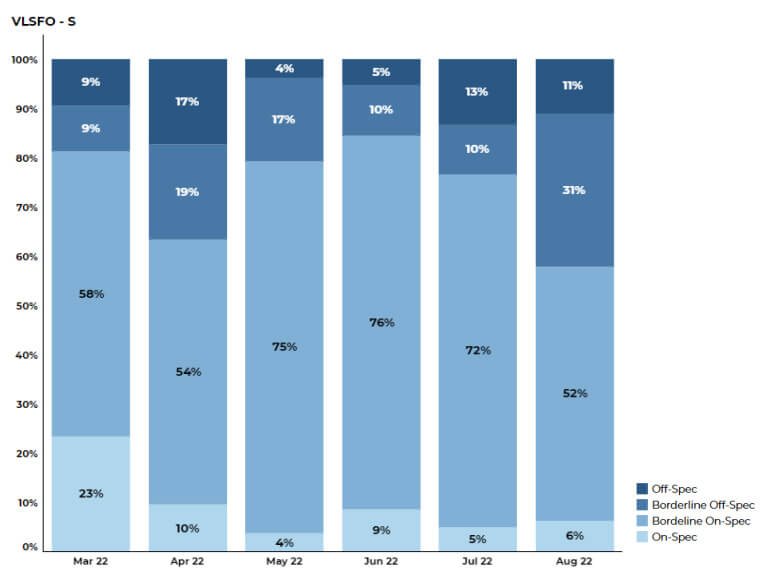 The question has to be why? Well, as a former physical supplier in the region, the challenges of minimizing cross-contamination when buying ex-wharf in Rotterdam are well known given the complexities of the supply chain prior to the barge. These challenges are magnified due to the starting point of blends moving from 0.47% to 0.49% meaning that less than one percent of a 3.5% Sulphur fuel will increase the theoretical concentration to 0.525% Wt. Sulphur.

That said, data available to Integr8 has also highlighted barges being used for both High and Very Low Sulphur blends which inevitably then results in elevated Sulphurs being noted as stowage or deliveries move from one to the other.

Indeed, if you then remove examples of the above from the mix in ARA the residual risk falls close to that of Singapore.

The relevance of variances between Density listed on the Bunker Delivery Note and that obtained when tested, known as a Density short lift, has rarely been more important given the very high prices being noted at this time and, as a result, the potential for financial losses to the end user.

Data available to Integr8 Fuels identifies several key locations in the world with endemic variances for both VLSFO and MGO. We would also mention that these variances are less common with HSFO due to the density often being blended near the maximum specification. 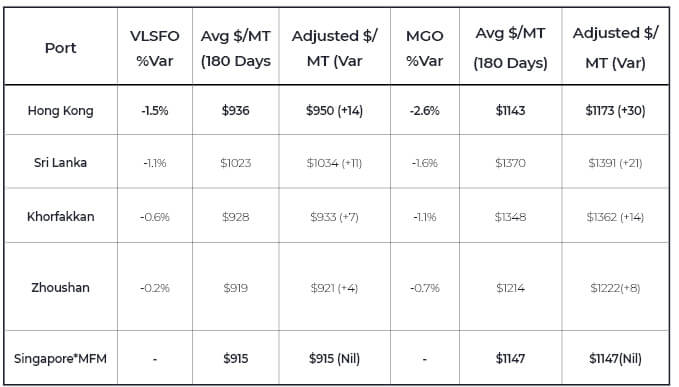 The picture told in Fig 4 lays bare the need to always consider port data and price in tandem when it comes to the accuracy of Bunker Delivery Notes and even when comparing and adjusting prices from port to port or supplier to supplier.

For instance, if you used average prices for Singapore and Hong Kong for MGO in the last 180 days, Hong Kong would be $4 per ton cheaper than Singapore. However, when you apply the average 2.6% loss, this flips the calculation back into the favour of Singapore’s MFM supply (which is not impacted by Density variance) to the tune of $26 per ton.

Even with just the two examples provided the use of data in selecting the best supplier for the task at hand is an obvious one, particularly given the commercial headwinds affecting many stakeholders across the industry at this time. Simply being drawn to the lowest price often results in either indirect losses, such as time dealing with a claim, or more direct losses to the balance sheet by either not receiving the correct amount of oil or not receiving the quality of oil demanded to allow the vessel to continue to trade.

Thankfully, trends can be identified using data and buying adjusted accordingly in most cases, which should allow us all to mitigate risks, prevent losses and sleep a little easier.