How to Develop the US Offshore Wind Supply Chain

The US is expecting to create a whole manufacturing industry which will grow on the back of investments, contracts, manufacturing, jobs and services, for the offshore wind sector.

How Likely Is This?

In the longer term it is obvious that having significant manufacturing capacity in coastal US states makes more sense than making components elsewhere and sending them on long sea journeys to their installation site. However, in the short term the sector will require a great deal of imported machinery and skills.

International free trade has been instrumental in creating a positive marketplace for offshore wind, by driving down costs and accelerating growth. Unfortunately, this has had contrary effects on local prosperity, where areas do not receive the benefits of investment. Public and political support for offshore wind developments can therefore be undermined.

This creates a dilemma for all concerned: losing community support threatens to damage the immature US offshore wind market. The benefits of free trade – notably, its significant role in driving down the Levelized Cost of Energy (LCOE) – must therefore be balanced against the dangers of alienating local communities, stakeholders and political groups.

The experience of the UK in this matter is salutary. The UK government has a requirement for 50 percent of the supply chain to be local content by 2030. Currently many major components and subsystems are manufactured outside the UK.

Given that the largest expenditure is in phase two, the UK is not moving towards its local content targets particularly quickly.

This is an issue which may impact the US offshore wind roll out, although the upside is that the US has a much larger manufacturing capacity than the UK.

The US Procurement Model by 2030

There are no concrete answers regarding which components will be made on US soil, which companies will make them, and where this will happen. New York, New Jersey, Maryland, Virginia and Rhode Island are all competing for a central role in the offshore wind supply chain.

One item unlikely to be made in the US in the near future is the turbine nacelle, which will be imported from Europe. Outside of China, the market for offshore wind turbines is dominated by Siemens Gamesa and MHI Vestas, with Paris-based GE Renewable Energy investing heavily to catch up.

But many other major components — including foundations, towers and blades — are fair game for U.S. manufacturing, said Stephanie McClellan, a director at the Renewables Consulting Group.

The imposition of tariffs on imported commodities such as steel and aluminum are another issue to contend with. Aggressive foreign trade practices are an "assault on our country," President Donald Trump said, before signing a Section 232 proclamation that adds 25 percent tariff on imported steel and a 10 percent one on imported aluminum. Both essential materials for renewable energy systems. "Steel and aluminum are important commodities for critical wind, solar and storage components,with few bankable substitute materials available," states Wood Mackenzie Power. It calculates that this will add three to five percent to the LCOE, which will make it more difficult to get offshore wind projects off the ground.

Clearly, it makes no sense to set up a US manufacturing sector, when tariffs make it uncompetitive with European or Asian manufacturers. This is the dilemma faced by the domestic industry. 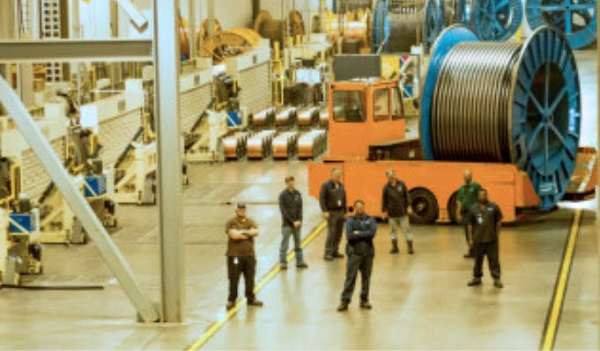 Current US Potential for Manufacturing

“Currently, there are no [onshore wind] tower manufacturers located in the North-East. Although New York has over 100 steel fabricators with the majority of them being involved in structural steel building fabrication, none of these are located at or close to coastal water transport. Any of the existing New York steel fabricators would have to acquire the offshore wind tower technology specifications from a U.S. or international tower manufacturer and secure a suitable coastal location. The top steel fabricators in the State include Nucor Steel in Auburn, New York and Vass Pipe & Steel in Mineola, New York.”

Other components and subsystems are similar. The US industry will have to be created from scratch. This will require sufficient projects in the pipeline to ensure that the companies can benefit from a continuous order book. Obviously, this was how the European industry started, but it had no competition, and the US will have to thrive in a very competitive environment, as Senvion found to its cost.

The US has made a start: the foundation jackets for Block Island were made at Gulf Island Fabrication in Houma, Louisiana. Prysmian and Nexans both have high-voltage cable manufacturing plants in South Carolina for onshore applications, which could make subsea cables. Several other US plants could also potentially build infrastructure. Docks and port areas are being scoped. The potential is there.

The various planned arrays will have some US content. However there is a dilemma for all concerned – is it more efficient to purchase these systems from European or Asian sources who are making them already or to develop a domestic industry which will have to fight hard to take market share and is hampered by tariffs? Legally, specifying a percentage of components as local content may not necessarily be the most advantageous way to proceed.

The US offshore wind market is probably the most rapidly developing renewable energy sector in the world. Visit the US Offshore Wind 2020 website here today to discover how you can secure market share in the US offshore wind industry boom!

At US Offshore Wind 2020, June 18-19, Boston, you will get unprecedented access to 2,000+ offshore wind executives, including every major developer, investor, advisor, contractor, manufacturer, supplier and key stakeholder. You’ll find partners, win contracts and seize opportunities at America’s largest offshore wind event. Miss it and miss out on securing your next big offshore wind contract.