Cruising with the Power Pioneers

Just over 20 years ago the very first shore power connection for the cruise industry was introduced in Juneau, Alaska. This is the story of how an environmentally conscious cruise company, a small yet ambitious city, and a bold local power company blazed a trail the rest of the world is still working to follow.

Juneau is somewhat of a contradiction. The Alaskan state capital is both small yet large, isolated yet popular.

Home to just 32,000 inhabitants, it is actually the second biggest city in the United States by area and, although “off the beaten track,” a major draw for cruise vessels.

In fact, according to Beth Weldon, the mayor of the City and Borough of Juneau (CBJ), and a fourth-generation Juneauite, 98 percent of all cruise ships visiting the state stop off at the capital. In 2019, before the pandemic, cruise ships brought some 1.3 million visitors on shore; buying local produce, sampling cuisine, picking up souvenirs, and supporting thousands of jobs.

“I can’t stress how important this is,” Weldon explains. “20 percent of all the sales tax generated in the city comes from cruise passengers, amounting to around USD 10 million (2019). We also have a ‘passenger head tax’ that brings in close to USD 17 million a year. And then, of course, on top of that, there’s employment, with businesses from local restaurants to florists – some of these vessels like a lot of flowers – making the most of a reliable revenue stream.

“The benefits are there for all to see.”

But so are some environmental challenges – a realization that led Princess Cruises, one of Juneau’s longest standing visitors, to adopt an innovative course of action. 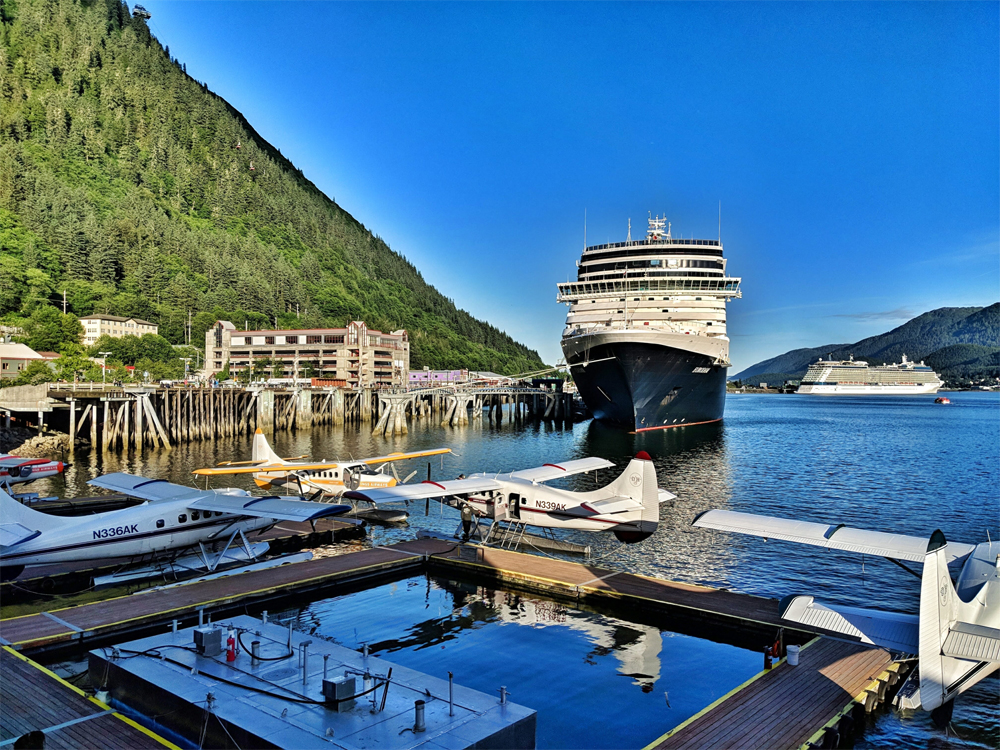 Juneau is served by the Alaska Electric Light and Power Company (AEL&P), which generates 100 percent of its electricity through hydropower.

Mayor Weldon notes, with a slight air of resignation, that residents are treated to “an abundance of rain,” not to mention the occasional heavy snow fall, throughout the year.

Even as early as the 1990s, Princess Cruises was beginning to focus on minimizing its environmental impact to help preserve the natural beauty of areas that proved to be such a draw for its passengers.

The smokestacks of docked cruise vessels, burning heavy fuels while in Juneau’s docks, were not conducive to that mission.

“We decided to approach the issue from a new angle,” states Martino Pepe, Senior Director, Electrical Asset Management, serving Princess Cruises, Holland America Line, Seabourn, and P&O Cruises. “We knew that Juneau, through AEL&P, had a surplus of clean electricity. So, we began investigating the possibility of our vessels accessing that available energy to power onboard services during the day-long port calls. This would allow us to turn off diesel engines and reduce visible air emissions in the local area, while also minimizing our own operational carbon footprint.

“The result was a world first shore power installation, also known as ‘cold ironing,’ for the cruise industry.”

Rising to the challenge

Princess partnered with Alaska Electric Light and Power Company and the City and Borough of Juneau for the pioneering project at the city’s Franklin Dock in the summer of 2001.

With assistance from expert suppliers, such as ABB, shore-side equipment was installed, including a specially designed transformer, cables, circuit breakers, and control circuits. Electric power could then be transmitted from the transformer to docked vessels via multiple 3 ½-inch diameter flexible electrical cables, which were made to hang from a special gantry built to accommodate the 25-foot rise and fall of the tide and withstand 100 mph winter winds. 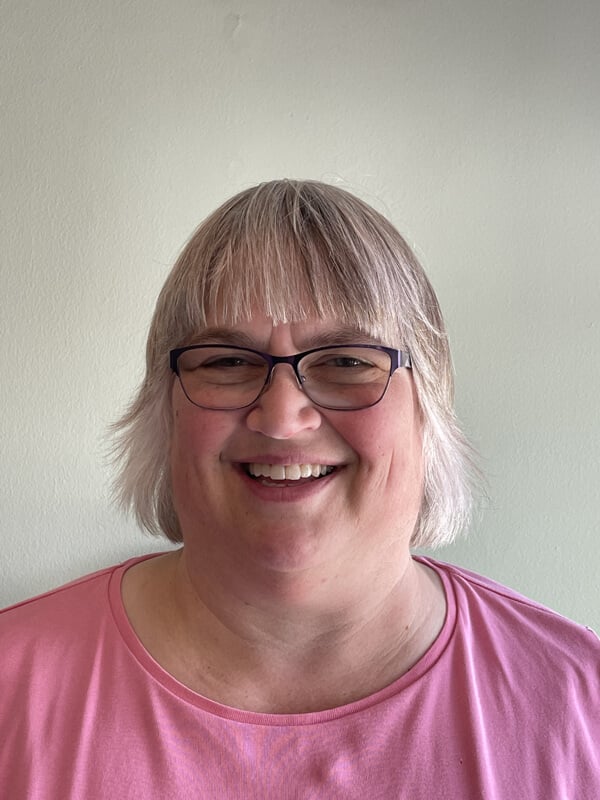 Beth Weldon, the mayor of the City and Borough of Juneau

“It was a challenging project,” admits Weldon, “but Princess was, and still is, a fantastic partner for CBJ, while AEL&P has shown both dedication and innovation to make this a reality. It’s been a remarkable accomplishment for our remote city, and one we’re very proud of.”

Although the mayor admits to some hurdles along the path to greener port calls, no obstacle has proved insurmountable.

“We have an isolated grid, with no power from anywhere else,” she notes.

“When one of these vessels plugs in that accounts for about 30 percent of our summer load – it’s like plugging in another small city. We can normally accommodate that, but there has been once or twice, after unusual bouts of dry weather, when we’ve had limited ‘brownouts.’ But that’s always been quickly resolved. AEL&P really has done a great job!”

The benefits of the system extend far beyond being a breath of fresh air for Weldon and her fellow Juneauites.

In a further innovation, the revenue generated through Princess plugging in for the past 20 years has been credited to a Cost of Power Adjustment (COPA) account. This essentially means that the money Princess pays subsidizes the cost of power for local residents – so the more cruise ships connect, the cheaper the electricity is for those on land.

So far, this has amounted to close to USD 9 million flowing into community coffers.

“It’s been a win, win, win, win,” says a smiling Weldon. “The Princess ships have no visible emissions, the vessels can reduce their carbon footprint, Princess gets cheaper power for ships while in dock, and AEL&P gets extra revenue which is then passed on to local rate payers.”

“If there’s any other ports, or cruise and utility partners, thinking about doing this out there I’d say, quite simply, ‘do it!’ Work closely with good partners, as we’ve done, and you won’t regret it.” 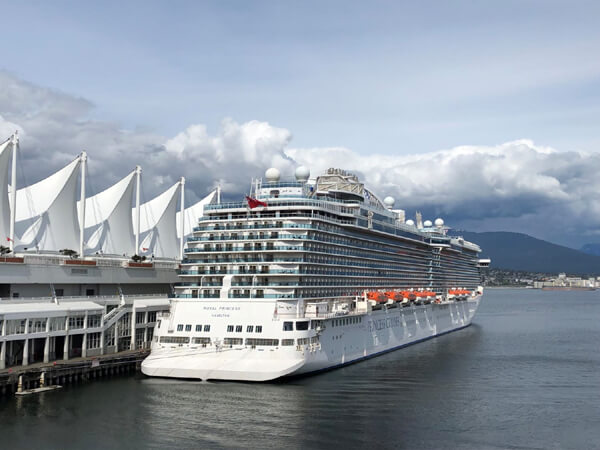 There definitely are others considering it, and many that have done it, after Princess blazed the trail.

Martino Pepe says the solution has evolved from a novel concept to “a must have” for forward-thinking ports, authorities, and ship operators.

“The view has definitely changed,” he notes. “In the last 20 years nine ports in North America have been retrofitted with shore power, and there’s many more scheduled to come online in the next five years. It is, in short, the right thing to do from an environmental point of view.”

And the trend extends far beyond the US and Canada. In Europe, for example, the FuelEU Maritime Regulation, set to come into effect in 2025, imposes life-cycle Green House Gas (GHG) footprint requirements on the energy used on board ships. Part of this move will require container and passenger vessels to connect to shore power from 2030 for stays longer than two hours.

So, expect to see Juneau’s early move being followed by an increasing number of ports worldwide as part of maritime’s ongoing energy transition.

As far as Princess is concerned, cold ironing is already ‘business as usual.’

Since 2001, the firm has invested more than USD 15 million to enable its vessels to connect to shore power, outfitting all 15 ships in the fleet with custom-built hardware and automation systems to automatically plug onboard electrical networks into local grids. The ships now make a total of around 300 shore power-enabled port calls a year, shutting their own generators down in an average of 40 minutes after docking.

“They are a true industry frontrunner,” Weldon states matter-of-factly.

She concludes: “We couldn’t have asked for a better partner. Princess Cruises understand the uniqueness of Alaska, put its money where its mouth is in terms of environmental commitment, and keep in close contact with us at all time, having representatives permanently based here. In short, they are not just a great company to work with, they are a part of the community here in Juneau.”

A community that, despite its remote location, finds itself at the very heart of developments for the global cruise industry.