Offshore wind is set to move further and further from shore, as demand for renewable energy grows and new floating turbine technology makes deep-water expansion possible. However, for the first time, large areas of the UK continental shelf now open for development are “seasonally stratified." David Attenborough has described these seasonal seas as some of the most biologically productive on the planet. While they only cover seven percent of the ocean, they are estimated to account for somewhere between 10 percent and 30 percent of the life at the bottom of the food web.

According to our new research, one byproduct of deep-sea wind farming is that the foundations of these floating turbines could help reverse the damaging effects of climate change on such seas.

In seasonally stratified seas, the water is completely mixed during winter, but separates into layers in the spring with warm sunlit water forming over the top of colder water below. The formation of this “stratification” during spring triggers a massive explosion of marine life as phytoplankton (microscopic algae) blooms in the warm surface waters, forming the base of a food chain which ultimately supports fish, seabirds and whales.

However, the nutrients in the sunlit surface layer rapidly become exhausted by the plankton bloom. After this point, growth depends on nutrients stirred up from the deep water by turbulence associated with tides, winds and waves.

This turbulence not only stirs nutrients up, but also stirs oxygen down into the dark, deeper layers where dead plants and animals sink and rot. Since oxygen is needed for things to decay, this mixing helps this “marine snow” to rot, transforming it back into useful nutrients.

Increasing stratification will reduce the ability of natural turbulence to stir up vital nutrients from the deep into the warm water surface layer and so diminish their ability to sustain marine ecosystems.

As the ocean warms, it is also less able to hold oxygen, potentially leading to poor water quality.

So where do wind farms come in? The introduction of wind turbines into deeper water, where the ocean is stratified, will provide a new, artificial, source of turbulence. Water flowing past the floating turbine foundations will generate wakes, causing the warm and cold layers to mix together. In fact, we recently published research showing the wake from foundations at least doubles the natural turbulent mixing within the region of an offshore wind farm. 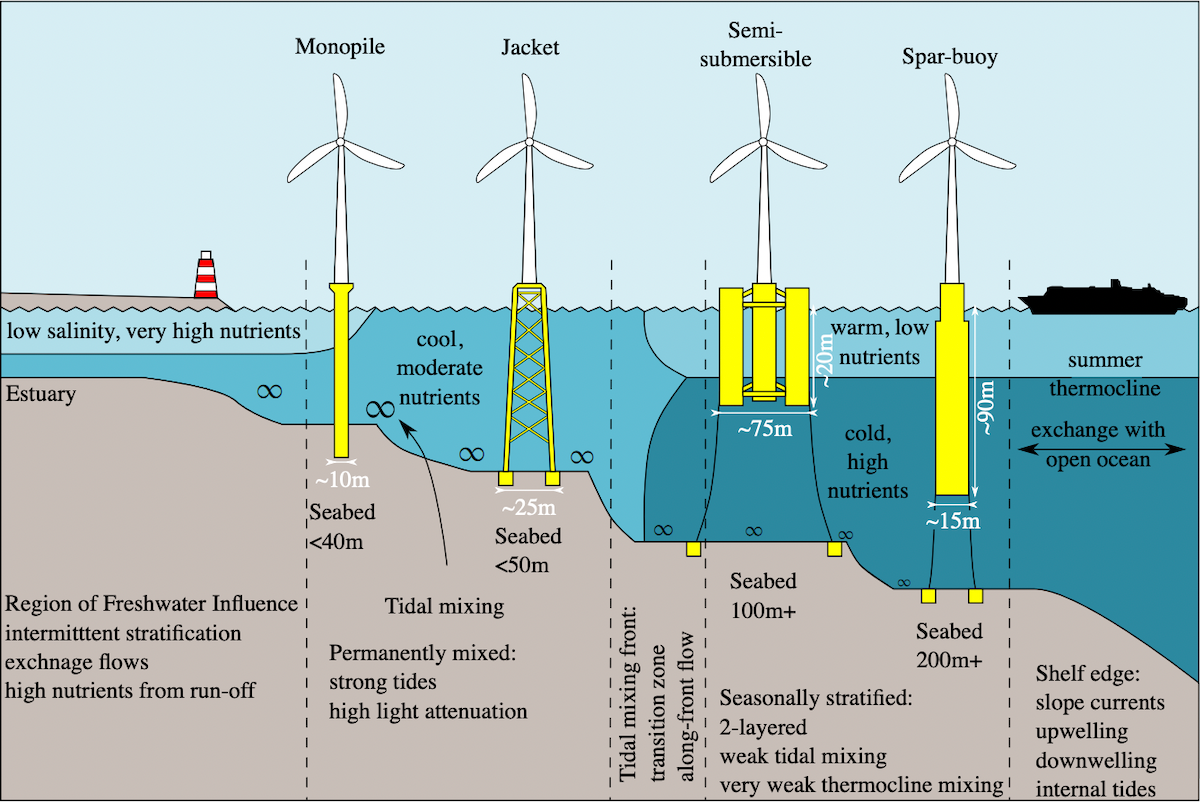 This increased turbulence could potentially offset the impacts of climate change on stratification and increase the supply of nutrients to the surface layer and oxygen to the deep water. Something similar already occurs around underwater banks, which is why very productive fisheries are often found in places like Dogger Bank in the North Sea or the Grand Banks of Newfoundland – shallow points where different layers of the ocean have been mixed together.

It seems that offshore wind could help seasonally stratified seas become more productive, more biodiverse and support more fish. Careful turbine design and wind farm planning could therefore provide an important tool in the battle to save these important ecosystems from the worst impacts of climate change.

Tom Rippeth is a Professor of Physical Oceanography, Bangor University.