We Can Fix Climate Change If We First Fix Congress

The world’s merchant fleet is the sixth largest emitter of greenhouse gases in the world, behind China, America, India, Russia and Japan. This is a problem since climate change will be a major threat to the continuation of our economy. We must find a way to do more to reduce the amount of carbon taken out of the earth and put back into the atmosphere.

This article – and the two video links below – will explain two new and innovative techniques to accomplish this. The first idea is a new way to help reduce carbon emissions by first removing the influence money has on the U.S. Congress. Note: this will be easier than you think. The second idea is a money-making ship based program to raise awareness for climate action all around the world.

The academic community inadvertently made a mistake by introducing climate change using mind numbing scientific details. To truly understand what is happening all one needs to worry about is the concentration of carbon in the atmosphere. Carbon in the atmosphere is the earth’s thermostat. Period.

The natural process of photosynthesis took millions of years to take the carbon out the atmosphere. As it did this, it also changed the carbon dioxide physically and chemically before sequestering it in the earth as coal, oil and natural gas. This carbon is now permanently out of the carbon cycle and can no longer be used to raise and lower the earth’s temperature.

If our civilization was to put the same carbon back in the atmosphere at the same rate photosynthesis took it out, there would be no problem. Life would slowly adapt to a slowly warming planet. But we are currently putting carbon back in the atmosphere about 700 times faster than photosynthesis took it out. This is causing the earth’s temperature to rise faster than at any time in the past two million years.

As a result of this, something is going to change, and the world's food supply might be the first to change. It is estimated that the planet is currently warming about 3,000 times faster than plants can adapt. There are already indications of food shortages in various places around the world. In fact, a new phenomenon known as “flash droughts” will reduce the wheat crop in U.S. in 2017.

Harvard’s School of Public Heath reported that the level of protein in grain has decreased between six and 14 percent due to a warming planet. 60 percent of all vertebrates have gone extinct since 1970 due to habitat loss. Humans are vertebrates, and we are currently in the process of destroying our own habitat.

What makes climate change difficult to appreciate is the extremely long lag between the time when carbon is first released into the air, and when the tangible results of a warming planet are first realized. This lag in timing could be up to a decade or more. The climate change events we are experiencing today are the result of carbon released years ago. This means there are many more years of warming already baked into the system. 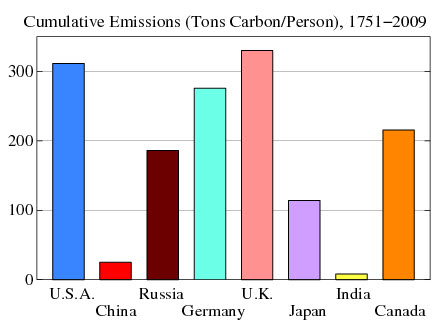 Fossil fuels have been an economic windfall of almost unimaginable proportions. That is why economists have come to the conclusion that it was not hard work and intelligence that allowed modern man to achieve all that we have in such a short period of time. Rather, it was the abundance of free energy. If there had not been unlimited amounts of fossil fuel energy stored in the earth, everything that has happened since the industrial revolution in 1750, would have been done using only the power of a man’s arms and a horse’s hind quarters. However, putting carbon back in the air in order to maintain the civilization we have created will eventually have devastating consequences for humanity.

If this is the case, why do our leaders continue to tell us we can tweak our energy intense economy in such a way that it will continue on this trajectory indefinitely? Physics tells us that if we take the carbon out of the earth and put it back in the atmosphere, things on earth will change. It is for this reason that we can no longer afford to blindly follow our leaders. The onus is now on us – the general population – to take the necessary action our leaders can’t, or won’t. Maybe Gandhi got it right when he said, “If the people will lead, the leaders will follow.”

But Gandhi was one man, leading a group of people in one country. Climate change is a global problem and we need some country to stand up and lead the world. The U.S. is the only country with the experience, resources and military to lead the world. For this reason we must find a way to make the U.S. Congress again function as the “independent, deliberative and unencumbered decision making body it once was.”  (This quote comes from the Fix Your Congress Petition.)

Our Congressional representatives are motivated by money more than they should be. If we could remove the need for big-money in the election process, it would be much easier for them to work together to solve problems. Getting the money out of government is not as difficult as we have been lead to believe.

In order to get elected, or reelected, candidates need to raise tens of millions of dollars in order to buy the media time necessary to attract the public’s attention. Finding that money is at the core of the problem. However, we can fix this problem by changing the selection process. Americans already have the right to do exactly that according to the U.S. Constitution: Article I, Section 4 - “The Times, Places and Manner of holding Elections for Senators and Representatives, shall be prescribed in each State by the Legislature thereof.”

In other words, each state – and not the federal government – has the right to decide how candidates are selected. This gives every governor in every state  the right to change the selection process in such a way as to diminish the need to raise huge sums of money. There are a number of ways to do this, and each state can use the approach that works the best for them.

When considering what changes to make to the selection process, we would all do well to consider the first Democracy in Greece in 430 BC. They selected representatives by lottery. Each candidate selected was expected to do their civic duty. America could do the same thing today. If the bar for admittance into the lottery is set high enough, everyone in the lottery would be at least as qualified as the people in Congress today.

Once selected to be a candidate for Congress they would be elected by voters the same as they always have. (There are also ways to keep money out of the election process.) All the lottery does is remove the need for money, money, and more money in order to be selected, then elected. Just think how much more time our representatives would have to manage the country’s affairs if they did not have worry about raising money, organizing reelection campaigns, swapping favors and, most of all, making sure their major donors back home were happy. 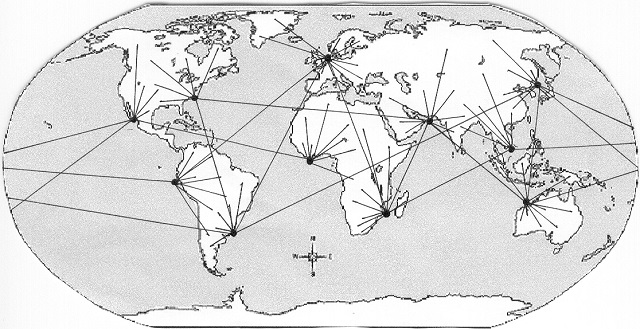 Climate change is a global problem. In order to address the problem we need to get the global population involved. In the image above, each dot is a tall ship. The ships travel from port to port and country to country - increasing awareness for global issues along the way. In each port, like-minded citizens will come together to discuss ideas and suggest solutions for climate change. The live video conferencing will both personalize and localize the global issues. The local universities, environmental organizations, business leaders and celebrities in each port will be part of the Earth-Ship program.

Each tall ship will be sponsored by a different multinational corporations. Because of this innovative business model each donor, individual or corporate, will enjoy material benefits far greater than the cost of participation.

The Earth-Ship program is a global response that will help to increase world unity by focusing the world’s attention on issues common to all mankind.