98 years ago, Filipino-American, Japanese-American and African-American cabin cooks and stewards fed hungry sailors and marines serving aboard the USS Olympia. They were on an important mission - bringing the World War I Unknown Soldier home from Europe. Their story has never been told before. On Veterans Day, please join me in thanking these men for their service to our country. 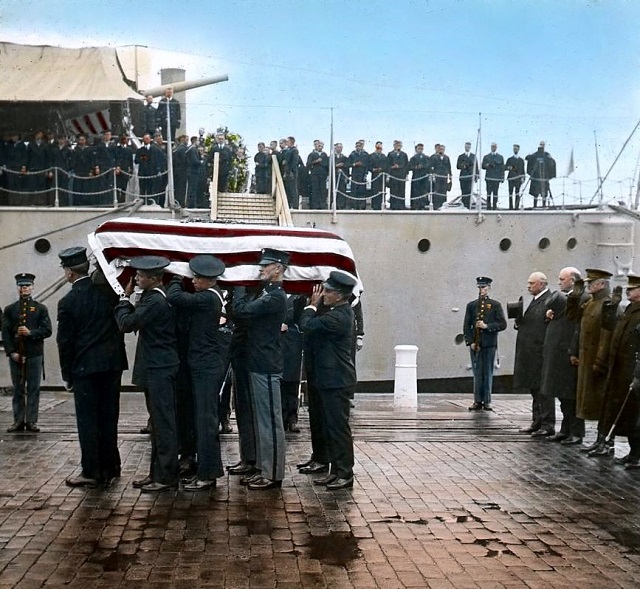 Andres Alegaro served as a cabin cook during the 1921 voyage. He was born in the Philippines in 1880 and enlisted in the U.S. Navy in the early 1900s in Manila. The San Francisco Call published a story about him and other Filippino-American sailors in 1908 entitled “Filipino Sailors are Lonesome Men.” The essay referenced the fact that Alegaro was “wearing the wearing the uniform of Uncle Sam” but “there are none of his kind to greet him here.” Here being San Francisco and the United States.  Alegaro died in 1965, and he’s buried at the Mount Moriah Naval Plot in Philadelphia, Pennsylvania.

Leopoldo Angkico served as a cabin steward. Like Alegaro, he was born in the Philippines. In August 1921, Angkico applied for a U.S. passport. The document references his military service aboard the USS North Dakota (1912-1916) and the USS Olympia. Sadly, we’ve been unable to find information about Angkico’s post Navy life.

Three additional Filippino-Americans served aboard the USS Olympia - Theodorico Maynes (cabin steward), Mariano Mendoza (cabin steward) and Pedro Soroan (cabin cook). Maynes arrived in the United States in 1917, and he filled out paperwork in 1920 to become a naturalized U.S. citizen. The paperwork required him to affirmatively state that he was not an anarchist or polygamist. Maynes was honorably discharged from the Navy on December 14, 1921, and he’s buried at Cypress Hills National Cemetery in Brooklyn, New York.

Mendoza enlisted in the United States Navy in 1913 and served aboard the USS Kansas, the USS Dahlgren, and the USS Olympia. After leaving the military, he lived in Philadelphia.

Soroan served as a cabin cook. He immigrated to the United States in 1914, served aboard the USS Olympia during the 1921 voyage and is buried at the Fort Rosecrans National Cemetery.

For historical reference, the USS Olympia served as Admiral Dewey’s flagship at the Battle of Manila Bay in 1898. The Philippines became a U.S. territory after the Spanish-American War.

Abraham Bolden was an African-American who enlisted in the Navy in Norfolk, Virginia. He served as cabin cook. Using Ancestry.com and the National Archives, we’re trying to find additional information about his Navy career. We think he served on active duty during World War I and World War II, and we’ll be doing more research on him as we approach the 100th anniversary of the return of the World War I Unknown Soldier.

Yamamoto was also born in Japan and served with Mizokawa aboard the USS Columbia and the USS Olympia. He served as a cabin cook during the 1921 voyage. In 1920, Yamamoto applied to be a naturalized American citizen. In his application, he explicitly states that he bears no allegiance to Yoshasito, Emperor of Japan. Yamamoto died in 1931, and his World War I veteran status is prominently marked on his death certificate.

John Brady is President and CEO of Independence Seaport Museum.