To Study 170-Knot Hurricanes, Engineers Will Need a Bigger Fan

In an airplane hangar in Miami, engineers are recreating some of the most powerful hurricane winds to ever strike land. These Category 5 winds can shatter a test building in the blink of an eye. Yet they aren’t powerful enough to keep up with nature.

When engineers built the Wall of Wind test facility 10 years ago at Florida International University, it was inspired by Hurricane Andrew, a monster of a storm that devastated South Florida in 1992.

The facility was designed to test structures’ ability to withstand winds up to 160 miles per hour. Now, we’re seeing the likes of Hurricane Dorian, which shredded neighborhoods in the Bahamas with 184 mph winds in 2019, and Hurricane Patricia, with winds clocked at 215 mph off the coast of Mexico in 2015.

Studies show tropical storms are ramping up in intensity as the climate changes and ocean and air temperatures rise. Designing homes and infrastructure to withstand future storms like Dorian will require new test facilities that go well beyond today’s capabilities – for what we believe should be called Category 6 storms.

The Wall of Wind

There is currently only one life-size test facility at a U.S. university capable of generating Category 5 winds, currently the most powerful level of hurricane. That’s the Wall of Wind.

At one end of the facility is a curved wall of 12 giant fans, each as tall as an average person. Working together, they can simulate a 160 mph hurricane. Water jets simulate wind-driven rain. At the other end, the building opens up to a large field where engineers can see how and where structures fail and the debris flies. 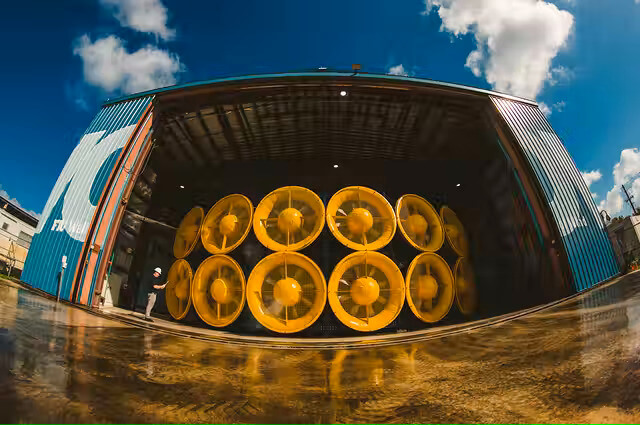 The powerful tempests that we create here allow us and other engineers to probe for weaknesses in construction and design, track failures cascading through a building and test innovative solutions in close to real-world storm conditions. Cameras and sensors capture every millisecond as buildings, roofing materials and other items come apart – or, just as important, don’t fail.

Ten years of research here have helped builders and designers reduce the risk of damage. That’s helpful when forecasters warn, as they do for 2022, of a busy hurricane season with several major hurricanes.

While engineers have been gaining knowledge through testing, the nature of storms is changing as the planet warms.

Warmer temperatures – fueled by increasing greenhouse gas emissions from human activities – enable the air to hold more moisture, and warmer oceans provide more energy to fuel hurricanes. Research shows that bigger and more intense storms that are heavier with water and moving more slowly are going to hammer the areas they hit with more wind, storm surge, flooding and debris.

Storms like these are why we’re working with eight other universities to design a new facility to test construction against 200 mph winds (322 km/h), with a water basin to test the impact of storm surge up to 20 feet (6 meters) high plus waves.

Computers can model the results, but their models still need to be verified by physical experiments. By combining wind, storm surge, and wave action, we’ll be able to see the entire hurricane and how all those components interact to affect people and the built environment.

Disaster testing is finding ways to make homes safer, but it’s up to homeowners to make sure they know their structures’ weaknesses. After all, for most people, their home is their most valuable asset.

Richard Olson is the Director of the Extreme Events Institute, Florida International University.

Ameyu B. Tolera is a Research Assistant at Florida International University - College of Engineering & Computing.