Tidal Power is Set for a Commercial Breakthrough in the UK

Tidal energy has long lurked at the back of the UK’s renewable energy arsenal, outshone by its wind and solar counterparts due in part to early issues with technology readiness and high costs.

Yet with recent research showing it could provide 11 percent of the UK’s electricity needs – and with significant government investment in the pipeline for UK projects – its future is looking ever brighter.

Tides are large movements of water around the Earth, powered by the gravitational pull of the Sun and Moon. In areas with particularly strong tides, we can harvest some of this power using turbines – similar to wind turbines, but underwater – that turn as water flows past them. This approach is more popular at present than previous ideas of using tidal barrages which are similar to dams, mostly because its environmental impacts are less severe.

In the last decade, the global tidal energy industry has demonstrated that siphoning energy from the sea works predictably and reliably. Around a dozen experimental turbine designs have been generating electricity in Scotland, Wales, Canada, China, France and Japan, many of them supplying power to homes and businesses.

The UK’s first “commercial” tidal energy projects, led by developers SIMEC Atlantis and Nova Innovation, both have multi-turbine arrays in the water in Scotland. The largest of these can currently produce six megawatts of power: that’s about the same as two or three onshore wind turbines, providing enough energy to run a few thousand homes. Expansion of the project is already underway. Over in the Faroe Islands, tidal developer Minesto has just announced plans for a 120 megawatt array which would supply 40 percent of the islands’ energy needs. 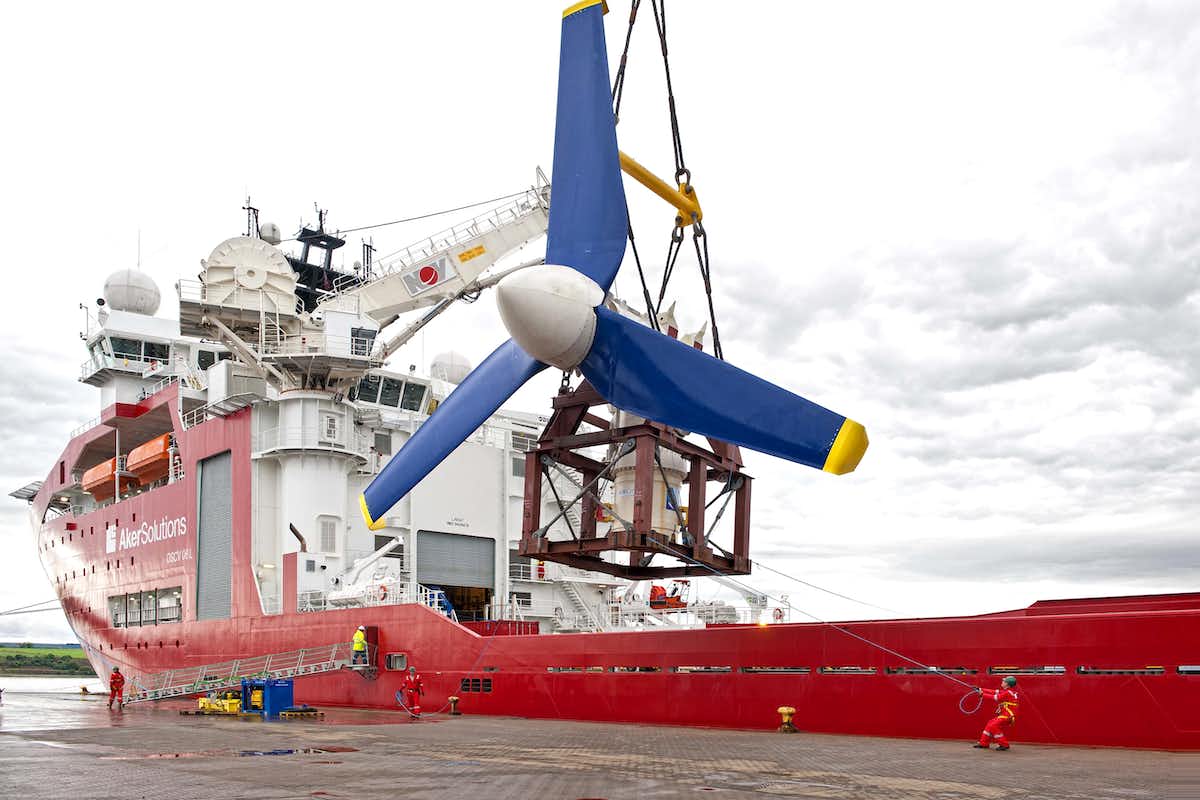 A one megawatt-capacity tidal turbine is prepared to be installed near Orkney. Green Energy Futures/Flickr, CC BY-NC-SA

Tidal turbine designs tend to be divided by one big question: whether it’s best for them to float, or to be mounted on the seabed. Floating turbines are easier to access for maintenance, and they benefit from faster-flowing water near the surface. But those on the seabed are less affected by storms and – in deep enough water – could allow ships to sail freely above them. It’s not yet clear whether one approach will win out, or whether the choice will depend on the location.

Either way, now that it has working technology in its hands, the tidal power industry needs to demonstrate that it can bring costs down. Luckily, there’s precedent here in the story of offshore wind. With the help of government support in the UK and elsewhere, offshore wind developers around the world have cut costs by close to a third over the last decade, and further reductions are expected thanks to ongoing research and development.

The cost of tidal energy may never be as low as that of wind. That’s partly because tidal turbines can’t be scaled up in size in the same way as wind turbines (in a limited depth of water, you can only build so big), and partly because doing things under the sea is usually more expensive than doing them on the surface (it’s a harsher, less accessible environment). But matching costs may not even be necessary.

As critics are keen to point out, the wind does not always blow, the sun does not always shine, and the tide is not always flowing: so to build a resilient low-carbon electricity system, we’ll need to use a range of different energy sources rather than relying only on that which is cheapest.

Tidal power offers the unique advantage that while its output will vary over time, that variation is predictable years in advance by understanding the orbits of the Earth and Moon. This means that grid operators will be able to plan for the varying output of tidal turbines, and schedule other sources to fill in the gaps.

Fortunately, the UK government seems to be stepping up to help the tidal industry. The latest round of the UK’s “Contracts for Difference” renewable energy funding contains a “pot” for tidal energy, so that it doesn’t have to compete with cheaper technologies like offshore wind – for now. And the recently published British Energy Security Strategy promises rather fiercely to “aggressively explore” tidal and geothermal energy technology.

Tidal energy is never going to be a big player at the global scale in the same way as wind or solar, because only a few parts of the world have strong tides. And unfortunately, it won’t be ready in time to help with the energy price crisis that we face right now.

But for those places with strong tides, including the UK, it has significant prospects, with a global market estimated by some analysts at $170 billion. And there may be potential in developing turbine tech further to take advantage of slower, but more consistent, ocean currents like the Kuroshio current off the coast of Japan.

Tidal energy technology works, and it’s here to stay. Now, the most efficient way to get it powering our homes and businesses is to build more of it.

Simon Waldman is a Lecturer in Renewable Energy at University of Hull.