The Growing Significance of the Andaman and Nicobar Islands

The rise of two global powers hailing from the same region has made the Indian Ocean, more specifically the Andaman and Nicobar Islands (ANI), a hotly pursued region.

With China already making great advances on its path to military superiority and control over the trade route via waters in the South China Sea and via land through the One Belt One Road initiative, it is imperative that Indian government understands the strategic role the ANI, a chain of 572 islands under its sovereignty, in helping her maintain a dominant role in the Indian Ocean. 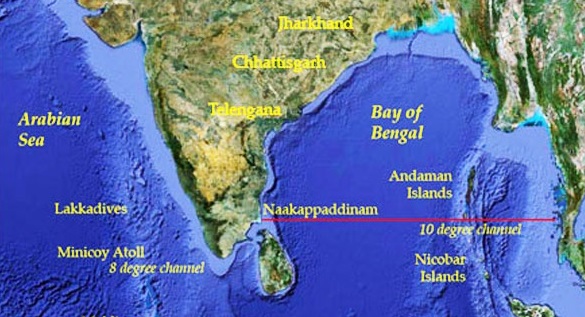 The northernmost part of the archipelago is only 22 nautical miles away from Myanmar, the southernmost point of the Nicobar Islands, is only 90 nautical miles away from Indonesia. The Ten Degree Channel which falls under the Exclusive Economic Zone of India is a conduit for more than 60,000 commercial vessels each year, thereby making the ANI an indispensable region for India’s national security.

The lifting of sanctions of United Nations on Iran allowed India to sign a historic deal with Iran which gives India access to mainland Europe for trade via the Indian Ocean through Chabahar Port.

China’s historical territorial claim in the South China Sea has allowed it to connect 12 inland Chinese regions with mainland Europe via the Pakistan-controlled port in Gwadar.

This is a strong indication that China is projecting her dominance in the Indian subcontinent and adjoining waters. It is a matter of concern for India’s long exercised hegemony in the ANI maritime zone. However, any conflict arising as a result of competing interests in the region should be resolved peacefully by negotiation or consultations, as per the Convention for Law of the Sea (UNCLOS).

India took action to protect its interests in the ANI under UNCLOS back in the 1970s, claiming the over 1,200 islands in the region should be Indian territory. Technically, India demanded that no distinction be made between an archipelago constituting a single state and an archipelago being an integral part of a coastal state. A baseline boundary should therefore be drawn by joining the outermost points of the islands.

India’s demand was motivated by the possibility of having unrestricted and widest possible access to the Indian Ocean and Andaman Sea in order to use the minerals rich islands for resource exploitation. Moreover, India wanted to restrict foreign warships and vessels from having an unrestricted access to the strategically significant region.

If India’s demand regarding archipelago status were fulfilled, the baseline would have provided its sovereign rights over an area which is currently part of the high seas. However, UNCLOS rejected India’s claim. It was deemed that if mid-oceanic islands that do not have an intrinsic political entity are give the archipelago status, it would result in unreasonably extensive territorial limits that could infringe upon the territorial waters of other states as well the right of innocent passage.

Nonetheless, as per Article 56 of the 1982 Convention, India can exercise sovereign control over the Exclusive Economic Zone around the coast of ANI for the purpose of exploring, exploiting, conserving and managing natural resources. This includes economic exploitation the seabed subsoil and the water adjacent to the seabed and its allows for the establishment of artificial islands, structures, submarine cables and pipelines.

Potential for Violation of UNCLOS

Subsequently, India's Ministry of External Affairs passed a notification in 2009 declaring the baseline for the coast of the ANI. India followed a straight baseline method but only on the western coast of the islands. This has not been put into action yet, and if India were to create a baseline on the eastern coast as well, it will encircle the entire archipelago.

Such acquisition of waters may strengthen India's claim on the region but would violate Article 7(3) of the 1982 Convention that states that – “The drawing of straight baselines must not depart to any appreciable extent from the general direction of the coast, and the sea areas lying within the lines must be sufficiently closely linked to the land domain to be subject to the regime of internal waters.”

Such baseline also hold the potential of violating sub clause 5 of the same Article which states that – “Where the method of straight baselines is applicable under paragraph 1, account may be taken, in determining particular baselines, of economic interests peculiar to the region concerned, the reality and the importance of which are clearly evidenced by long usage.”