In 1765, a young peasant woman left a remote corner of rural France where her impoverished family had scraped a living for generations. She set out on a journey that would take her around the world from the South American jungles and Magellan Strait to the tropical islands of the Indo-Pacific.

Jeanne Barret (also Baret or Baré) was the first woman known to have circumnavigated the world. Abandoning her bonnet and apron for men’s trousers and coats, she disguised herself as a man and signed on as assistant to the naturalist Philibert Commerson on one of the ships of Louis-Antoine de Bougainville’s expedition around the world.

During that voyage, Jeanne helped Commerson amass the largest individual natural history collection known at the time. Thousands of the plant specimens can still be found in the herbarium of the Paris natural history museum, although few bear Jeanne’s name.

Despite Jeanne’s singular achievement, she left no account of her journey or her life. She might have been entirely forgotten were it not for a dramatic revelation on a Tahitian beach in 1768.

Bougainville’s voyage famously promoted Tahiti as a utopian paradise of beautiful women and sexual freedom. But the Tahitian men were equally keen to meet European women and, despite her disguise, they swiftly identified Jeanne as one. 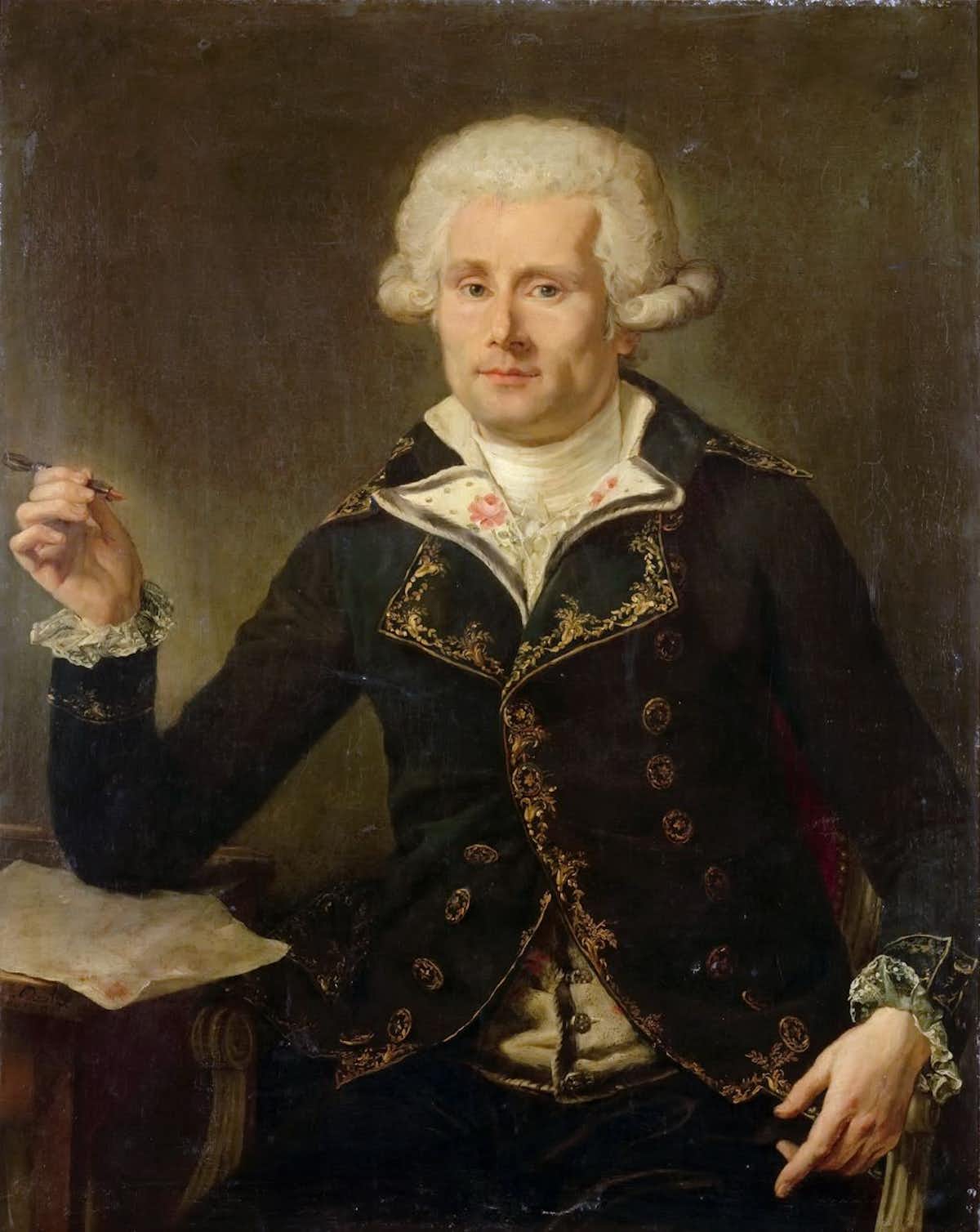 This revelation caused consternation on board and Bougainville was forced to intervene. He described Jeanne’s confession briefly in his best-selling narrative of the voyage. Having nothing but praise for her work, Bougainville ordered she be left alone to continue her work as a man.

Jeanne had done nothing wrong. French naval regulations did not forbid women from embarking, but there were penalties for men who brought a woman on board. Both Jeanne and Commerson insisted he was unaware of Jeanne’s ruse and that they did not know each other prior to the journey. As soon as the voyage reached French territory, the island of Mauritius in the Indian Ocean, Jeanne and Commerson disembarked.

Jeanne’s adventure was soon retold in a book on celebrated women and in the philosopher Denis Diderot’s famous Supplement to the Bougainville voyage. She was ultimately awarded a French naval pension for her services. 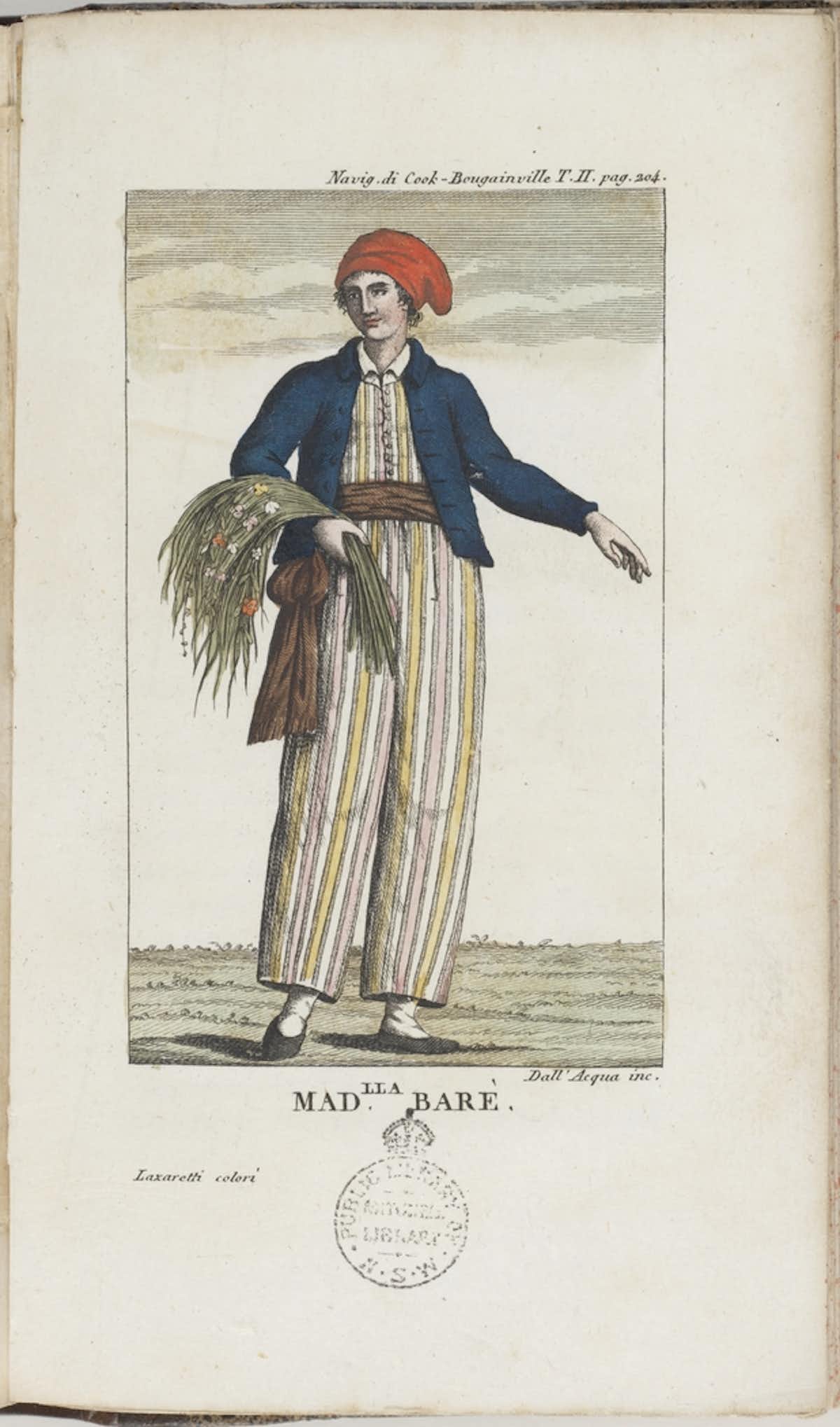 An allegorical image of Jeanne by Giuseppe dall’Acqua in 1816. Author provided

The only known image of Jeanne appeared in a book of famous voyages, drawn long after her death. The image is probably allegorical. Loose sailor’s clothes represent her voyage, a bunch of flowers represents botany and the red cap presents her as Marianne, an iconic revolutionary symbol of liberty and the new French republic.

In reality, a servant and botanist like Jeanne would have worn gentleman’s clothes, carrying an assortment of pins, knives, bags, weapons and papers for collecting. Plants were pressed in the field in a portable plant press.

Despite such early renown, details of Jeanne’s life beyond her famous voyage were scarce. For many years, little was known about her past, what happened when she left the expedition in Mauritius in 1768, how she returned to France or what she did with the rest of her life.

Writing the biography of a woman about whom we knew so little was always going to be challenging. Initial accounts of Jeanne focused on her work, appearance and sexual conduct. She was described as being indefatigable, an expert botanist and a beast of burden who carried heavy provisions while plant collecting. Men noted she was neither attractive nor ugly, but she behaved with “scrupulous modesty."

Commerson suffered from an incapacitating leg injury during his journey, which limited his mobility. Jeanne was probably responsible for collecting most of the South American plants, of which over a thousand are still found in herbariums today.

When museum scientists began posthumously publishing some of Commerson’s species descriptions, pioneering evolutionary biologist Jean Baptiste Lamarck was the only one who mentioned Jeanne’s contribution and courage. She was a servant, after all, so hardly warranted acknowledgement.

Commerson himself rarely mentioned Jeanne. It was not until after they left the voyage that he named a plant after her: Baretia bonafidia (now known as Turraea rutilans). In his description of this plant, Commerson recognized her “thirst for knowledge” and that he was indebted to “her heroism, for so many plants never before harvested, all the industrious drying, so many collections of insects and shells."

Nineteenth century accounts of Jeanne appeared as footnotes in the biographies of great men. Avoiding all impropriety, she was presented as Commerson’s “faithful servant," like Crusoe’s Man Friday, or Phileas Fogg’s Jean Passepartout. An early biographer, Paul-Antoine Cap, recounted a family story in which Jeanne loyally cared for Commerson on his deathbed in Mauritius and that she returned to live in his hometown in France.

“By way of remembrance and veneration for her former master, she left all she possessed to the natural heirs of the famous botanist,” he wrote. It was a story of boundless devotion much repeated in subsequent accounts.

It has been left to female researchers to uncover the details of Jeanne’s life. Attention has shifted to Jeanne as an individual, rather than an addendum to Commerson’s or Bougainville’s story.

In the 1980s, a local historian from Burgundy, Henriette Dussourd, uncovered the parish record of Jeanne’s birth in 1740 to a poor peasant family in the town of La Comelle. She also found a declaration of pregnancy (obligatory under French law) signed by Jeanne when she was 24-years-old. When she was five months pregnant, Jeanne had fled to Paris with Commerson, travelling under a new surname, as his housekeeper.

The circumstances are suspicious. Jeanne had presumably been working as a servant for the recently widowed Commerson and they moved to Paris to escape a local scandal. Early Parisian parish records were destroyed in the Commune fires of 1871, but Dussourd suggests a son was born, left in the Foundling Home and died young. Jeanne had a second son while in Paris, who appears to have died while she was away on her voyage.

More recently, a biography in English has attempted to fill in the gaps left in the archival record. Glynis Ridley’s popular biography has been criticized for scientific errors and speculation, but her version of Jeanne’s story has propagated widely across the internet.

Unlike the loyal servant trope of the 19th century, Ridley utilises a modern cautionary tale to fill out Jeanne’s story – the well-rehearsed narrative that adventurous women inevitably come to a sticky end. Ridley contends that the story of Jeanne’s revelation as a woman in Tahiti was a cover for a gang rape on New Ireland, off Papua New Guinea. And that Jeanne fell pregnant and gave birth to a son in Mauritius.

This story originates from a description by the doctor on board Jeanne’s ship, Francois Vivez. Vivez disliked Commerson and intended to publish a salacious account of his servant when he returned to France.

In his manuscripts, Vivez describes Jeanne being attacked by her crew mates and her gender exposed after her identification by the Tahitians. While Vivez greatly embroiders his accounts, there is enough confirmation from other journals to suggest they are based on facts. On balance, it seems likely that Jeanne was identified as a women in Tahiti and some of the crew decided to confirm this for themselves when they were next ashore.

But was there a rape? It is difficult to interpret these 18th century accounts, written in either French or Latin and laden with historical contexts and classical metaphors that have long since lost their associations for modern readers.

Bougainville had ordered that Jeanne was not to be harassed. Rape was punishable by death in the French navy. Could a naval commander tolerate such a serious crime and insubordination to go unrecorded and unpunished?

Bougainvillea, a flower named after the French explorer. Author provided

It seems unlikely. In his only comment on the subject, Commerson noted Jeanne “evaded ambush by wild animals and humans, not without risk to her life and virtue, unharmed and sound."

In any case, there is no evidence that Jeanne, suffering from scurvy and malnutrition, conceived a child on the voyage, nor of the obligatory declaration of pregnancy, or a child born in Mauritius.

A woman of means

Jeanne’s life in Mauritius and her return to France were actually more interesting than dramatic denouements that fulfil conventional expectations. The adventurous woman did not come to a sticky end.

She was not the faithful servant, comforting Commerson on his death bed. She was not left “alone, homeless, penniless” after his death, waiting for a man to rescue her. She did not return to Commerson’s hometown or remember him in death.

The archives tell a different story. Jeanne was granted property in her own right in Mauritius. When Commerson died, Jeanne was running her own profitable business. She bought a license to run a lucrative bar near the port.

By the time she married Jean Dubernat, a soldier in a French colonial regiment, she was wealthy enough to require a pre-nuptial contract. Her husband brought 5000 livres to the marriage while Jeanne brought a house, slaves, furniture, clothes, jewellery and a small fortune of 19,500 livres – two thirds of which would remain in her control. She was a woman of means.

Further research by Sophie Miquel and Nicolle Maguet in Dordogne, where Jeanne lived out her life after her return to France in 1775, has revealed more details. She purchased various properties including a farm, which is still recognizable today.

Her husband signed another legal document acknowledging these properties were shared equally with his wife. Jeanne gathered her family around her, including her orphaned niece and nephew, and ran a successful business as a landowner and trader – a far cry from her illiterate, impoverished childhood in Burgundy.

Jeanne was full of contradictions. She was a devoted aunt, yet left her own children in Paris to an unknown fate. She struggled to escape the constraints of France’s rigid class system and patriarchy, but also owned slaves. Her life does not always fit a comfortable familiar narrative structure. What we do know reveals Jeanne as a confident, capable, resilient woman — neither victim nor hero but a complex, inspiring and unconventional role model.

Danielle Clode is a Senior Research Fellow in Creative Writing at Flinders University. Her new biography of Jeanne Barret, "In Search of the Woman who Sailed the World," is published by Picador Australia.