Researchers have raised concern over the impact over commercial airplane exhaust emissions, which cause a noticeable increase in cirrus clouds at elevations of 16,000 to 20,000 feet. Cirrus clouds are composed of ice crystals and generally do not contribute to precipitation, but these clouds are believed to have global warming potential and may affect weather patterns.

Initiatives have begun to reduce airplane exhaust emissions and include research and development into battery-electric airplanes, which are currently small and only capable of short-distance flight. Steam is a combustion by-product of both hydrogen and ammonia-fueled engines, except that in maritime service, engine exhaust emissions occur just above the ocean surface with potential to condense into rainfall – rather than cirrus clouds at high altitude.

Future research would need to focus on several aspects of wing-in-ground effect vehicle technology in order to apply it for practical use on deepsea ocean routes. Ground effect craft would need to combine efficient travel just above the water surface with the ability to climb to higher elevation when encountering tall ocean waves.

Research undertaken in the USSR during the 1970s focused on ground effect planes of up to 5,000 tones total weight, a concept that would be potentially viable in trans-ocean commercial freight transportation. The wingspan of mega-scale ground effect planes would allow for occasional operation just above the height of tall waves. Mega-size ground effect planes could require special-purpose launching arrangements, like a coastal runway with a rail-mounted launch carriage. 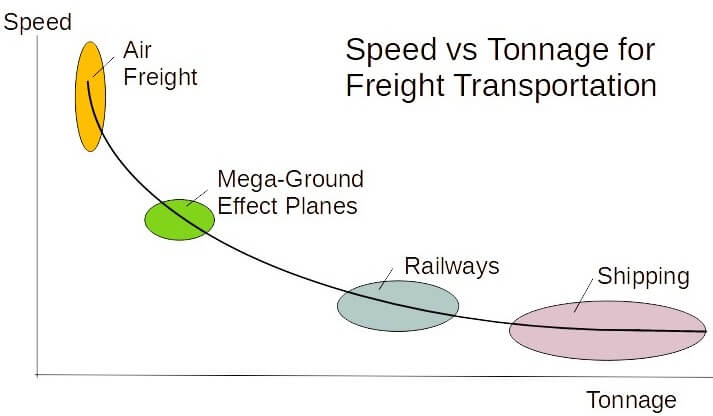 While intended for mainly straight route operation, the ability to transition from an elevation equivalent to five percent of wingspan to 40 percent of wingspan would also enhance turn maneuvers after lift-off during departure from point of origin and also when approaching seaplane runways at the destination.

While large ocean waves pose a problem for wing-in-ground-effect planes, there are several methods by which to respond. Automated monitoring systems could scan the ocean ahead and to each side of the plane as it travels across the ocean. Tilting forward and aft propellers would allow smaller, lighter weight craft to rapidly climb to higher elevation when encountering large waves. Rapidly readjusting the rear flaps on some wing designs would allow the craft to climb to an elevation equivalent to 40 percent of wingspan.

Fuel is the single biggest cost item involved in the operation of commercial aircraft, and especially where large aircraft operate short-distance flights. Wing-in-ground effect craft consume far less fuel than conventional aircraft on ocean routes of under 600 miles, allowing for same-day return trip service involving craft that are equivalent in size and payload capacity as aircraft.

Mega-scale ground effect planes of up to 5,000 tonnes total weight could operate multi-day, longer-distance service carrying freight. Allowing ground effect planes to lift-off from runways at coastal airports would greatly reduce the energy required to become airborne for battery-electric planes and versions built to the weight of conventional freight aircraft.