The Challenge and Promise of India’s New Container Super-Port

Inter-city transportation in India includes coastal shipping that carries freight at very competitive tariffs. While container ships of 23,000 TEUs are now entering international service between Asia and Europe, India has yet to open a port capable of berthing and providing service for such ships. Work is underway in the Kerala region of Southwestern India to build a container super-port, under very challenging weather conditions, at Vizhinjam that offers over 18 meters of natural water depth.

Following the upheaval and partial collapse of North America’s high-tech sector some 20 years ago and migration of a segment of that economy to overseas location that included India, the economy of India has been growing and transforming. Development of one sector of India’s economy led to development and expansion to other related economic sectors that includes manufacturing. While many obstacles restrict India’s overland transportation sector, India is also in the process of developing new, dedicated freight-only express railway lines that are intended to move both bulk and container freight at greater reduced in-transit times.

While India’s manufacturing and export sectors have been expanding, Indian ports are of shallow draft and restricted to comparatively small container and bulk transport ships. India’s coastal maritime sector provides bulk and container transportation service between major coastal cities, with great potential to expand roll-on-roll-off operations that could carry road-trailers at very low tariffs. While India’s coastal marine sector can easily connect to the container super port at Colombo at Sri Lanka, there are potential economic advantages to India developing its own domestic container super terminal in the southwestern region of the nation. 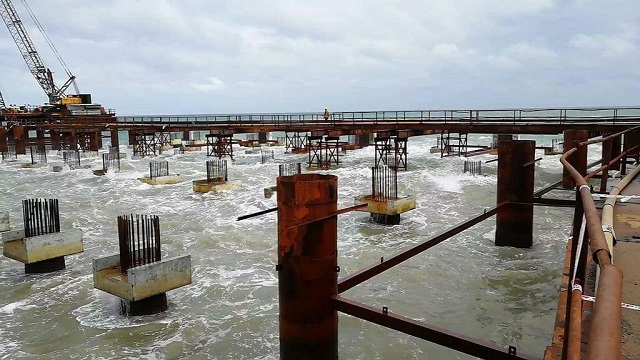 The proposal to build a container transshipment super-terminal at Vizhinjam has been mired in controversy courtesy of detractors who have voiced some skepticism about the planned terminal. One of the reasons for the skepticism is the close proximity of a transshipment super port of equivalent depth at Colombo with regular coastal ship sailings to/from Mumbai and Chennai. Prevailing weather conditions that include powerful waves on the Arabian Sea have proven to be a challenge for the construction of the breakwater for the terminal, with ships having to carry rock for construction.

While plans call for the port to open within the next 18 months, weather conditions could affect the opening date. While India is building dedicated freight railway lines that promise to greatly decrease time-in-transit, there are no plans to extend such railway lines to Vizhinjam. Coastal ships that sail to/from elsewhere along India’s coast are expected to carry transshipment containers to/from the Vizhinjam transshipment terminal. Proponents of the transshipment terminal see future benefit for India’s manufacturing and export sector, courtesy of India’s coastal marine sector that will provide low-cost connections to Indian coastal cities.

The presence of a container terminal for mega-size container ships offers potential future economic benefit to the surrounding Kerala region. Future twin navigation channels through the Suez Canal could allow for transit of slighter deeper (up to 18 meters draft), slighter wider and slightly higher container ships of up to 28,000 TEUs that could initially call at transshipment terminals at Vizhinjam, Colombo and Tangier and with potential to modify one of the container ports in the Hong Kong – Shenzhen – Guangzhou region to berth and service such ships. The increase capacity of such ships could benefit India’s manufacturing for export sector.

There may be future prospects to establish divisions of India’s developing manufacturing-for-export sector within close proximity of the container super-terminal, with coastal ships sailing from elsewhere from coastal India carrying raw materials, related bulk freight and parts of machinery to Vizhinjam. Some companies might realize cost savings undertaking final assembly of machinery for export in the Vizhinjam area, with final assembled products loaded into containers. Using the transshipment terminal at Colombo would otherwise result in some manufacturing-for-export companies establishing branch plant operations near that port. The economic benefit will instead remain in India. 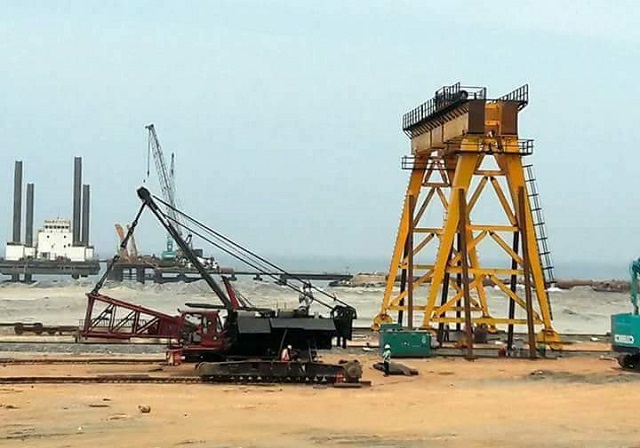 India’s territory includes a narrow strip of land located between Bangladesh and Nepal that connects to the Indian Province of Assam that shares a disputed border with China. Political tensions involving this region have periodically flared up between China and India. Investment from China led to the development of the transshipment port for mega-size container ships at Port of Colombo, Sri Lanka. India has traditionally, willingly and freely traded with Sri Lanka though regular coastal ship service that connects to several major Indian coastal cities. Except that trade avoids supporting a China-funded transshipment port at India’s doorstep.

Politically, India makes a statement by developing its own container transshipment at Vizhinjam. Any industrial spin-offs and economic benefits that the developed port would offer would be realized within India itself. India’s manufacturing sector is likely to develop branch plants near a major container export terminal and a domestic terminal is politically more palatable than a nearby overseas terminal. Perhaps future economic growth that occurs in the Kerala region following the opening of Port of Vizhinjam container transshipment terminal is a forgone conclusion. It is a region of India that would welcome such development.

The new container super-port is being built to the immediate south of the existing Port of Vizhinjam, allowing domestic coastal ships to deliver and pick up both domestic and international trade. Connections between the old port and new port would be essential to assure the smooth and efficient movement of containers between various locations of the port complex. The port could transship trade moving between Western Australia and Europe, also between Western Australia and east coast North America where plans are underway to develop a transshipment super-port for mega-size container ships in Eastern Canada.

While the American President has imposed trade tariffs on China-made good entering the U.S., he has undertaken no such action with India. The Canadian Prime Minister gained news media attention on their recent visit to India where he expressed interest in improving trade ties with India. A transshipment terminal for mega-size container ships planned for Eastern Canada would certainly benefit Indian trade with eastern North America, except that a political squabble is underway in Eastern Canada in regard to that proposed terminal. Perhaps Canada’s Prime Minister could plead India’s case in that region.

Within the next 18 months, India is expected to open a container transshipment terminal for mega-size container ships in the southwestern region at Vizhinjam. The port will offer 18-meter depth with potential to berth and provide service to container ships of 23,000 TEUs that are now under construction and beginning to enter service. India has political the combination of economic and political reasons to develop a domestic transshipment terminal, instead of trading via a foreign offshore terminal.