Should Boating in a Hurricane Be a Criminal Act?

After an extraordinary incident in which the same vessel had to be rescued twice in two days, Irish politicians are contemplating measures to penalize boaters for going to sea during heavy weather warnings.

On Monday, the Rosslare Harbour RNLI lifeboat and her crew of seven volunteers had to launch twice into "ferocious seas with wind speed in excess of 70 knots" to rescue a yacht crew in distress. The conditions were extremely challenging, with swells to 20 feet, but the team managed to secure a tow line to the yacht and brought it safely back into Rosslare Harbour.

"When the lifeboat crew reached them they were side on to the weather, taking a ferocious pounding and in danger of getting overwhelmed. I think if another hour had passed this story may not have had such a successful outcome," said Dave Maloney, Rosslare RNLI lifeboat operations manager.

On Tuesday afternoon, another RNLI lifeboat had to deploy to rescue the same yacht after its crew issued another distress call. The lifeboat put one of its volunteer crewmembers aboard the yacht to assist with the tow back to the port of Arklow. [NB: As shown in the photo below, the weather was calm during the second rescue.] 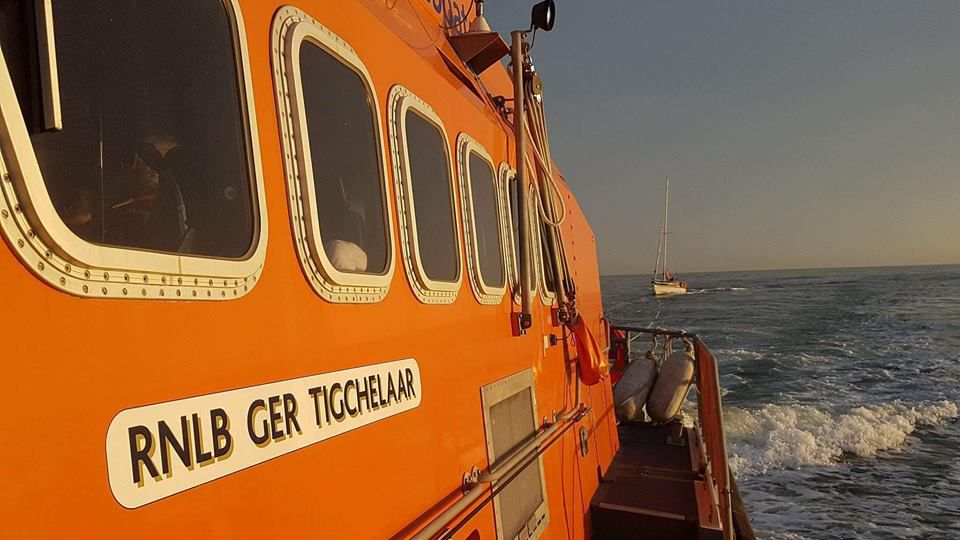 The Arklow RNLI lifeboat brings the yacht back in to shore a second time, October 17 (RNLI)

Many Irish officials were appalled to learn that RNLI volunteers had to deploy twice to rescue the same boaters. “It’s not just foolishness, it’s recklessness,” said Sinn Fein Transport Spokesperson Imelda Munster. “They are not only putting their own lives at risk, they are also endangering the lives of all the voluntary bodies, who give up their own free time to save lives . . . if [boaters] blatantly ignore safety warnings there should be repercussions."

On Monday, with the remnants of Hurricane Ophelia arriving off Ireland, coast guard officials had put a "status red" storm advisory in effect. The alert called on small craft not to head out to sea.

"People who disobeyed the red alert and travel warnings [on Monday] didn’t just put themselves at risk, they also put at risk the lives of other people, particularly our emergency services," said Taoiseach (prime minister) Leo Varadkar. "But I would never rush into creating a new crime. I think it is something that we will have to consider [on an all-party basis]."

Unlike most nations, the UK and Ireland give a significant portion of the responsibility for coastal search and rescue to a charitable non-profit group, the Royal National Lifeboat Institution (RNLI). The RNLI has 350 rescue boats located around the British Isles, and its volunteers and full-time lifeguards have been saving seafarers in UK waters for nearly 200 years.