Offshore wind farms are an increasingly common sight overseas. But Australia has neglected the technology, despite the ample wind gusts buffeting much of our coastline.

More than ten offshore wind farms are currently proposed for Australia. If built, their combined capacity would be greater than all coal-fired power plants in the nation.

The time is now

Globally, offshore wind is booming. The United Kingdom plans to quadruple offshore wind capacity to 40 gigawatts (GW) by 2030 – enough to power every home in the nation. Other jurisdictions also have ambitious 2030 offshore wind targets including the European Union (60GW), the United States (30GW), South Korea (12GW) and Japan (10GW).

Australia’s coastal waters are relatively deep, which limits the scope to fix offshore wind turbines to the bottom of the ocean. This, combined with Australia’s ample onshore wind and solar energy resources, means offshore wind has been overlooked in Australia’s energy system planning.

But recent changes are producing new opportunities for Australia. The development of larger turbines has created economies of scale which reduce technology costs. And floating turbine foundations, which can operate in very deep waters, open access to more windy offshore locations.

More than ten offshore wind projects are proposed in Australia. Star of the South, to be built off Gippsland in Victoria, is the most advanced. Others include those off Western Australia, Tasmania and Victoria.

Our study sought to examine the potential of offshore wind energy for Australia.

First, we examined locations considered feasible for offshore wind projects, namely those that were:

less than 100km from shore

Wind resources at those locations totalled 2,233GW of capacity and would generate far more than current and projected electricity demand across Australia.

Second, we looked at so-called “capacity factor” – the ratio between the energy an offshore wind turbine would generate with the winds available at a location, relative to the turbine’s potential maximum output.

Average annual wind speeds in Bass Strait, around Tasmania and along the mainland’s southwest coast equal those in the North Sea, where offshore wind is an established industry. Wind conditions in southern Australia are also more favorable than in the East China and Yellow seas, which are growth regions for commercial wind farms. 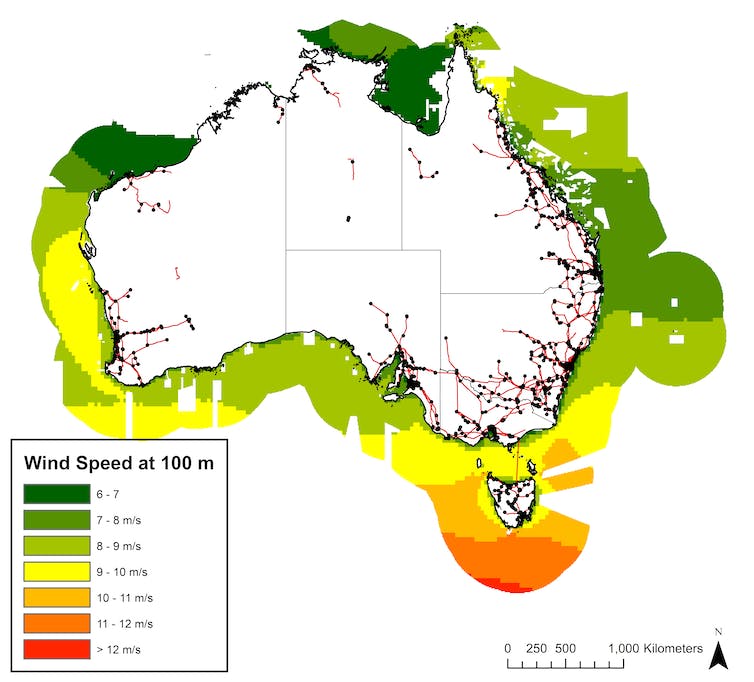 Next, we compared offshore wind resources on an hourly basis against the output of onshore solar and wind farms at 12 locations around Australia.

At most sites, offshore wind continued to operate at high capacity during periods when onshore wind and solar generation output was low. For example, meteorological data shows offshore wind at the Star of the South location is particularly strong on hot days when energy demand is high.

Australia’s fleet of coal-fired power plants is ageing, and the exact date each facility will retire is uncertain. This creates risks of disruption to energy supplies, however offshore wind power could help mitigate this. A single offshore wind project can be up to five times the size of an onshore wind project.

Some of the best sites for offshore winds are located near the Latrobe Valley in Victoria and the Hunter Valley in NSW. Those regions boast strong electricity grid infrastructure built around coal plants, and offshore wind projects could plug into this via undersea cables. 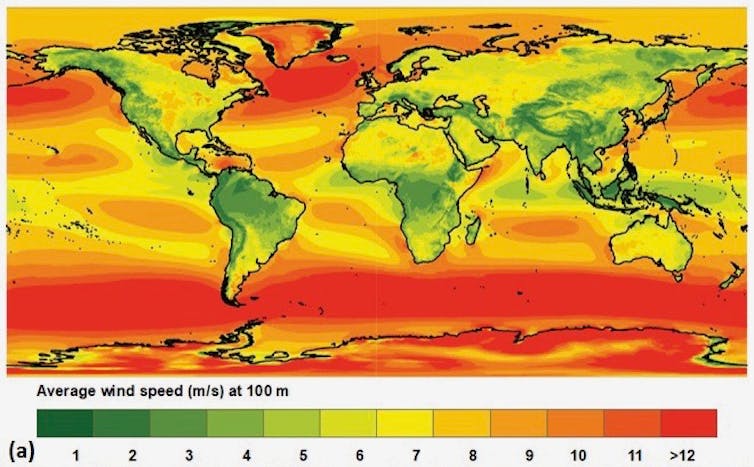 Our research found offshore wind could help Australia become a renewable energy “superpower”. As Australia seeks to reduce its greenhouse has emissions, sectors such as transport will need increased supplies of renewable energy. Clean energy will also be needed to produce hydrogen for export and to manufacture “green” steel and aluminium.

Offshore wind can also support a “just transition” – in other words, ensure fossil fuel workers and their communities are not left behind in the shift to a low-carbon economy.

Our research found offshore wind could produce around 8,000 jobs under the scenario used in our study – almost as many as those employed in Australia’s offshore oil and gas sector.

Many skills used in the oil and gas industry, such as those in construction, safety and mechanics, overlap with those needed in offshore wind energy. Coal workers could also be re-employed in offshore wind manufacturing, port assembly and engineering.

Realizing these opportunities from offshore wind will take time and proactive policy and planning. Our report includes ten recommendations, including:

If we get this right, offshore wind can play a crucial role in Australia’s energy transition.

Philip Marsh is a Post doctoral researcher, University of Tasmania.

Rusty Langdon is a Research Consultant, University of Technology Sydney.