A waterway vessel sailing at a speed of 12-miles per hour along a narrow channel requires 3.375-times the propulsive energy as the identical vessel sailing at eight miles per hour. There are jurisdictions where hydroelectric power and nuclear-electric power sells at a fraction of the price per kilowatt hour as diesel fuel for propulsion engines. During overnight off-peak periods when market demand for electric power is minimal, it becomes feasible to recharge grid-scale energy storage technology at far below market prices, including batteries aboard vessels that are assigned to daytime short-distance maritime operation.

Cell-CubeTM is the manufacturer of the long-life vanadium oxide flow “redox” battery that recharges the electrolyte and that offers a deep-cycle recharge-discharge capability of 20,000-cycles. Each unit is built to the same dimensions as 40-foot shipping containers and offers 200kW to 500kW output over three to eight hours. The competitor AmbriTM offers a liquid metal battery of equivalent life expectancy and built to comparable dimensions to 20-foot shipping containers (20-foot length by 10-foot width by eight-foot height) with 500kW output capability. Both technologies avoid the cycle-to-cycle fade that plagues some electrochemical storage battery technologies. 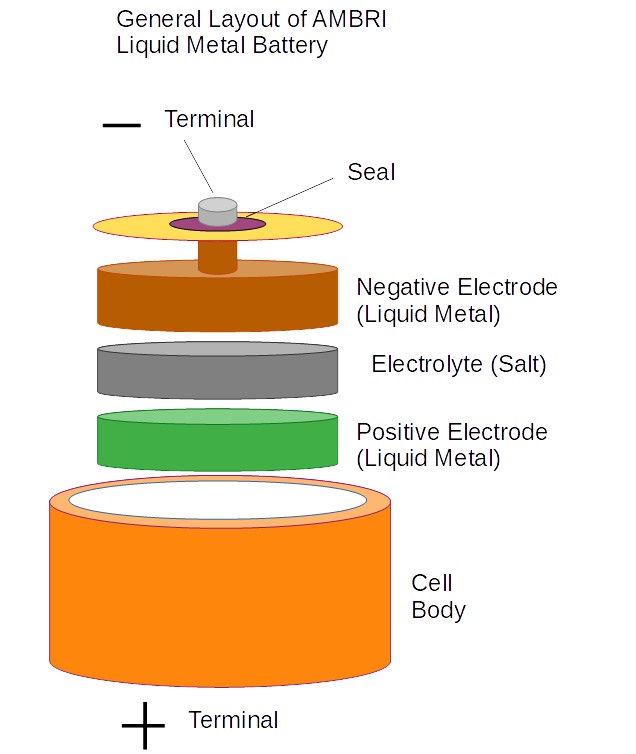 The vanadium-oxide flow battery can operate with ambient air temperatures between -20-deg C and 50-deg C with 400-volts output and a specific energy density of about 14Wh/Kg. Given that barges have ferried sections of laden freight railway trains across rivers, a tug could be built to carry the filled weight of vanadium-oxide batteries as well as the weight of molten metal batteries that operate at over 300-deg C. Adapting liquid metal battery technology to waterway operation would require innovation in insulation, such as using sections of zirconium-oxide to secure the battery to the vessel structure.

A tug and also a battery powered vessel involve a much larger scale of transportation technology than road going or railway vehicles. The larger scale and comparatively low travel speed allows for viable use of long-life grid-scale battery technologies that would otherwise be impractical for road and even railway transportation. A maritime vessel that sails the inland waterways will outlast road and railway commercial vehicles, enhancing the viability of investing in grid-scale battery technology to store propulsive energy. Commercial waterway vessel operators have competing battery technologies from which to choose for their unique applications.

Battery powered road vehicles expend additional energy carrying the weight of the energy storage system to climb to higher elevation, requiring light weight batteries with very high specific energy density in excess of 50Wh/kg. Commercial road vehicles such as school buses only operate during AM and PM periods for three to four hours per weekday. Battery powered city transit vehicles can undergo regular partial recharges throughout the service day at terminals and stations. In terms of energy consumed per unit of vehicle weight, road and railway vehicles are less efficient than maritime transportation.

Commercial electric battery propelled waterway vehicles do not have to carry the weight of the energy storage technology up gradients. When in transit to a different elevation at navigation locks, there is scope to partially recharge the batteries. Due to sheer physical size and weight carrying capability, battery powered waterway vehicles can utilize long-life grid-scale batteries with comparatively low specific energy density of 10 to 20Wh/Kg. At the present time, none of the battery technologies applied to road and railway propulsion can offer the extensive useable life expectancy of grid-scale batteries that can be adapted to waterway propulsion.

Research into flow batteries undertaken by the Materials Engineering group at National University of Singapore (NUS) has focused on increasing the energy storage density of redox flow batteries, including higher storage density from vanadium based flow batteries that can apparently hold up to double the energy and at temperatures of up to 80-degrees C. Flow batteries include large tanks of aqueous electrolytic solution of materials such as vanadium oxide and even salt solutions. Pumps flow the aqueous solution through stacks of cells to deliver electric power.

NUS research into Redox flow lithium batteries has focused on offering up to five times the storage density of vanadium flow batteries which if applied to vessels sailing along inland waterways, should allow for up to five times to sailing distance. A flow battery concept still subject to research and further development at NUS uses two tanks, one tank of titanium oxide with a second tank of lithium-iron-phosphate with potential of holding up to 10 times the storage density of vanadium redox flow batteries. If the research is successful, the technology might find maritime propulsive application.

Depending on geographic location, barges of 35 feet (10m) beam sail along waterways with a draft of six feet (1.8m) to nine feet (2.7m). The tug pushing an navigating the barge sails in the hydraulic shadow of the vessel ahead of it, allowing the tug to sail an almost identical cross-sectional profile and allowing the weight of grid scale batteries to be spread of a large area of floor surface. A 180-foot tug could carry 12 grid-scale batteries built by Cell-Cube to the same dimensions as a 40-foot shipping container and placed three lengthwise by four widthwise.

Each vanadium-oxide flow battery could deliver 200kW to 500kw for three to eight hours meaning 2400kW (300-Hp) to 6000kW (8,000-HP) with deep-cycle recharge-discharge capability of over 20,000-cycles. Stopping to transit navigation locks provides opportunity to partially recharge the batteries as the tug-barge assembly changes elevation. To help accelerate tug barges and barge trains leaving some navigation locks, it may be possible to install a short distance of trolley cable along the channel bank to allow the tug barge to draw electric power directly from the grid, with batteries blending in as the assembly reaches its cruising speed.

While mega-size ocean going tourist ships attract massive numbers of customers, a percentage of the tour market chooses to take vacations aboard smaller vessels that sail the inland waterways. These vessels typically sail only during daylight hours and lay over at river ports during the overnight hours when it becomes possible to recharge onboard grid-scale batteries at off-peak power rates. Battery powered river cruise vessels could attract the eco-tourist segment of the market. These vessels also make stops at points of interest to allow customers to visit local attractions while batteries undergo a partial recharge.

The sheer weight of grid-scale batteries carried at low elevation in the vessel provides added stability during daylight sailing hours when the majority of passengers may occupy the highest elevations of the vessel. From such a location and courtesy of the low speed of sailing, the customers might enjoy more of the scenery along the passing coastline. The combination of low-speed sailing, overnight stops and a few short duration daytime stops including at navigation locks allows the vessel to provide service to the customers while also regularly partially and fully recharging the batteries.

While makers of long-life grid-scale electrical storage batteries are focusing exclusively on stationary installations, the same battery technology may actually have a mobile application providing propulsive energy for a small variety of maritime vessels that sail the inland waterways. While flow redox batteries and molten metal batteries would be impractical for road and railway propulsion, these technologies might find application in maritime propulsion.