Op-Ed: Why Do We Have So Many Flag Officers?

It is entirely possible that the enormous superstructure of the U.S. Navy is actually working against maintaining an effective Fleet. We seem to be mired in a time in which counterproductive institutional incentives and dynamics have developed naturally in the absence of an existential threat to focus our efforts, such as a great power competitor. One of these unhelpful dynamics has been the explosion in the numbers of flag officers.

In the U.S. Navy, with the exception of the Civil War, there were no flag officers from the American Revolution until the Spanish American War. There were ceremonial commodores when operational protocol called for them, but otherwise no flags. However, the record from the Naval Historical Center beginning with the Spanish American War going to the modern naval era is instructive: 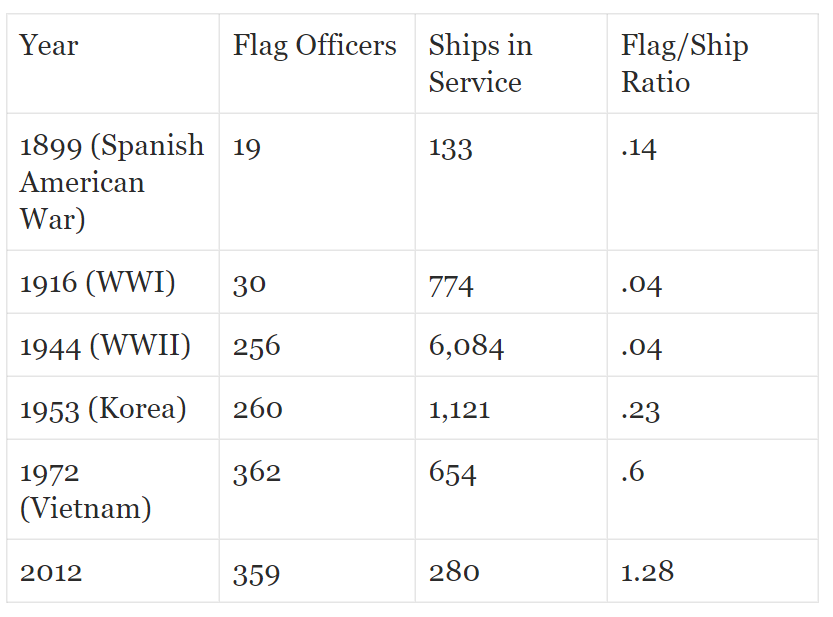 There are explanations for this growth. First, there is an institutional “law” which affects the matter. In 1955, the Royal Commission on the Civil Service published a report which explained how the previously inexplicable growth noted across the British bureaucracy was inevitable. The report was based upon what soon became known as “Parkinson’s Law.” According to The Economist, Nov 19, 1955: “The fact is that the number of the (senior) officials and the quantity of the work to be done are not related to each other at all. The rise in the total of those employed is governed by Parkinson’s Law, and would be much the same whether the volume of the work were to increase, diminish or even disappear…Omitting technicalities (which are numerous) we may distinguish, at the outset, two motive forces. They can be represented for the present purpose by two almost axiomatic statements, thus: Factor I – an official wants to multiply subordinates, not rivals; and Factor II – officials make work for each other.”

The study went on to demonstrate Parkinson’s Law, using, in one case, the explosion of Royal Navy admirals, between 1914 and 1928, a period of time in which the number of ships fell precipitously, while a sharp rise in admiralty officials (almost 80 percent) was noted, creating what one called “a magnificent Navy on land.”

This perfect self-licking ice cream cone was replicated a century later in the U.S. In 2010, then-Secretary of Defense Robert Gates called for the elimination of more than 100 general and flag officer positions as part of his so-called “Efficiency Initiatives.” Despite a clear plan and subsequent Pentagon assurances that cuts were to be made, the top ranks remain largely intact to this day, and the small number of reductions occurred almost exclusively at the one-star level.

Add to this the fact that a May 2013 GAO analysis found that the number of support staff at DoD’s Combatant Command headquarters grew “by about 50 percent from fiscal years 2001 through 2012.” This created added distance between commanders and warfighters. “In some cases the gap between me and an action officer may be as high as 30 layers,” Gates once stated, resulting in a “bureaucracy which has the fine motor skills of a dinosaur.”

Intransigent, perhaps, but the services have their own explanations for the necessity of ever-increasing numbers of general and flag officers, as well as Senior Executive Service (SES) personnel. According to a February 2016 CRS report entitled, “General and Flag Officers in the U.S. Armed Forces:  Background and Considerations,” one frequently cited cause of the increase in senior personnel has been the increase in “joint” requirements that followed enactment of the Goldwater-Nichols Act (GNA) in 1986. In other words, we’re hamstrung by a law not of our own making.

Another rationale used to explain the increase has been an increased focus on forging coalitions with other nations. This has, in turn, generated a demand for senior military leaders to conduct coordinated planning, training, and operations with their peers from foreign nations. The proofs of this rationale seem to be missing, as the military worked with large coalitions in the past – in World War II, for example – without a glut of senior officers.

There are also inescapable issues connected to the organizational structure of the military, which includes certain positions regardless of overall size of the military. There will be a Chief of Naval Operations regardless of force size. A similar case can be made for many senior persons who serve on the Joint Staff, the Service Staffs, the Combatant Commands, and certain defense agencies. According to the CRS, “given the organizational structure of the Armed Forces—some of which is required by law—the amount of management ‘overhead’ does not necessarily change in direct proportion to the size of the force.”

What Goes Up and What Goes Down

While the military, writ large, is clearly more sophisticated than it was in the past, and while political, acquisition, and joint/combined organizations impose a greater demand than ever before for senior representation, it is still hard to understand how the number of flag officers and senior executives are sustained in the Navy with intractable fervor even as the active ship list has declined by about 70 percent.

With specific regard to the Navy, what do the numbers suggest? Why is there no apparent flag statistical correlation with active ships or Sailors? Should we understand this disproportionate growth in flag officers to be worrisome or simply a necessary development? At least in the Surface Force, the growth of flag/SES numbers has been matched by a demonstrable and steady decline in readiness. This decline seems to have been relatively unnoticed and unremarked upon by leaders until very recently when many appeared to be taken by surprise that ships were poorly maintained, trained, and sailed without required certifications.

If, as has been claimed, this number is the absolute necessity in order to keep the Navy on a level playing field with the other services – for both dollars and influence – then can’t these senior persons also do a more meticulous job of running things inside the Navy?

It seems that “The Navy” has less and less to do with the active fleet and more to do with something else. A part of the problem of ineffectual leadership may lie in what criteria are being used for flag selection. Increasingly, and over many years, flag activities have less to do with actual fleet operations and more to do with extra-Navy relationships. The entering argument for flag-selection has moved (at least in the case of surface warfare) away from, “sustained, superior performance at sea” and toward the question of, “what can you do for us in Washington if we make you an admiral?”

It is commonly understood that, regardless of record, an officer without substantial experience in Washington is unlikely to move beyond a first command. Those officers who stay with the fleet, without also keeping a weather-eye on good Washington tours, and an associated accretion of powerful advocates, end up being viewed by boards as insufficiently broad, which is tantamount to non-selection. Whether they are the sorts of persons that are wanted to fight the nation’s battles at sea or not is hardly of interest. Instead, what is of interest is: Can they can influence a budget? Plan future manning? Are they acquainted with the interests of industry and congress? Are they thoroughly familiar with the employment of power and influence beyond the Navy’s lifelines? Are they polished? Do they fully support Navy policy, regardless?

Whether they are skilled in ship maintenance, anti-submarine warfare, or operational-level warfighting and tactics is of little (or at best secondary) interest despite how vital these grassroots-level skills are toward crafting viable policy. Instead what we have built is a bloated generation of leaders who are better at fighting bureaucracies than wars.

Flag numbers cannot be easily drawn down once established. Nevertheless, a new path forward must be described. That path includes cultural changes, which can only be effected from the top-down.

First, board precepts should be altered to reward at least a few of those officers who are more regarded for their operational/waterfront excellence than their experiences in front offices. More stars need to go to officers who are intimately connected to the fleet and with developing warfighting tactics, rather than with the Washington milieu. Rather than asking simply, “What can he or she do for us in Washington,” perhaps another important question should be, “Who do we want to fight our wars?”

Second, hard questions should be asked with regard to whom, exactly, we are putting in charge of the actual procurement and maintenance of ships. Engineering Duty Officers (EDs) and Acquisition Professionals (APs) are the unquestioned flags of who actually runs the bottom-line acquisition of ships, as well as their maintenance. It seems odd that these are also officers that have had few command-at-sea (EDs) or major command-at-sea tours (APs).

Third, meaningful command opportunities for captains, beyond major command, should be established. It makes little sense to give our most experienced surface force captains the choice of either making flag, going to an obscure, heavy-lifting staff job, or get out. As it is, most of the few “sequential major commands” are either shore- or training-based, and kept firmly under the thumb of closely connected flags. Our real ship experts leave, almost to a man, if they don’t make flag.

Fourth, cut the number of SES positions. Certainly, one may ask what these SES personnel can provide that uniformed personnel cannot. Continuity? Stability? Unfortunately, it seems as if these terms have become euphemisms for the sort of bureaucratic paralysis and risk aversion, in the name of self-interest, which increasingly plagues the services but especially the SES. Consider replacing these persons with long-serving captains, post-major command, and allow them to remain in place for multiple tours (as opposed to indefinitely as is the case with SESs) if necessary.

Finally, the real bureaucracy – the self-licking ice cream cone  –  needs to be cut. Not just flag officers and senior executives, but their counterparts across the services should be a primary target for a congressionally-mandated mission/task review, with resultant manpower and infrastructure reductions, as well as an across-the-board reduction in flag and SES-level requirements. There are several approaches available. First, former Secretary Gates’ Efficiency Initiatives should be fully implemented. Second, caps on the total number of general and flag officers, instituted by President Bush in 2001, should be reinstated and tied to the size of the force.

While there may be certain institutional and bureaucratic reasons for maintaining the number of senior personnel in the service, the evidence seems to suggest that these leaders are increasingly remote from, and unable to address the issues of, the fleet – and the same is probably true in the other services.

This article appears courtesy of CIMSEC and is reproduced here in abbreviated form. The original edition is available here.