Until recently, locating sea mammals as part of the vital conservation work that goes on in the Hauraki Gulf off New Zealand relied principally on experience. After 25 years of watching the birds that flock over sea mammal feeding grounds, Auckland Whale and Dolphin Safari (AWADS) skipper Andy Light knew roughly where to head, to the delight of leisure and research passengers alike.

AWADS' half day “Safari” is both a pleasure trip and a conservation voyage, billed as “New Zealand’s only research-based marine mammal experience.” It departs on average 250 days a year from Viaduct Harbour in downtown Auckland. The tour operator works with New Zealand’s Department of Conservation and several universities to combine up-close viewing of whales, dolphins and sea birds with marine biology research.

From late 2015, however, Captain Light is the beneficiary of new technology that he believes can take his work to another level on board AWADS' catamaran Dolphin Explorer.

Dolphin Explorer has undergone a complete bridge refit, including major instrumentation and systems upgrades. The most visible changes come in the shape of a new VHF antenna and three new widescreen, multi-touch, high definition Simrad monitors. Light says even the smallest technical change can bring benefits. A new Simrad RS90 VHF unit with built-in thirty second record and replay is making a “major impact to my day, because I can play back any messages that I’ve missed if I’m talking to passengers”.

Light singles out Simrad’s latest NSO evo2 Multi-function Echosounder and their Halo Radar as the features yielding a “major step up” in conservation efforts.

“The echosounder technology is helping us to create an improved sonar log and therefore to get a better understanding of the seafloor,” says Light. “The detail is good enough for the echosounder to act as a hydrographic instrument, giving us a deeper insight of reasons behind the movement of animals.” 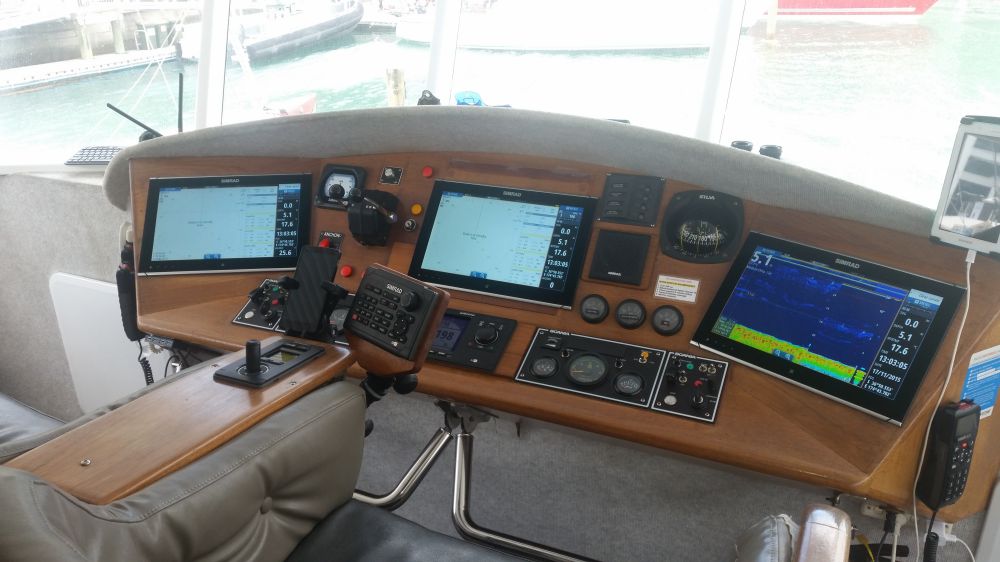 Greater accuracy is also having an impact day-to-day, he explains. Towards evening, a scattering layer of the zoo plankton on which whales feed rises in the water to graze on the phytoplankton that has been photosynthesising at the surface during the day. CHIRP, the sweep signal technology used by the NSO evo2, can identify the contours associated with such events. Light says the new transducers on board Dolphin Explorer are delivering “brilliant” pictures that make the predictive process “far easier now”.

But he saves his most extensive comments for Simrad Halo, the firm's new solid state pulse compression radar. Dolphin Explorer has acted as the beta tester for the Halo, which has been developed to combine the best characteristics of traditional pulse and Broadband 4G Radar systems.

“At close range, the performance of broadband is just amazing,” he says. “When it comes to using the pulse capability at distance, rather than looking for white birds on a white background, we’re able to identify bird patterns 6-8 miles away so that I know where to put my binoculars.”

Even when used in a 4 -array configuration, as was the case during commissioning, the Halo made a significant impact, Light says. Now that the unit is operating in 6-array, “the performance is even better”.

“We track the mammals and their migration routes. Marine mammals are the first to leave if pollution occurs, so they are critical ‘eco-indicators’. The data that we gather also provides evidence of the real impact that increasing ship traffic has on the marine environment. We know, for example, that we are losing two whales every year as a result of container ship strike.”

Light says that initial contact took place when a technician from Simrad's Florida office took in the AWADS “safari,” and the two struck up a rapport. Although the skipper started his career as a fisherman, he also has extensive experience ashore in the IT sector, both in software development and network installation. Their conversation evolved into a partnership to put newly developing technology through its paces in tough conditions, working with an IT-savvy skipper able to generate invaluable feedback.

New Zealand Prime Minister John Key recently told the United Nations of plans to create the 620,000 sq km Kermadec ocean sanctuary by law in 2016, an area that serves a haven to nearly 35 species of whales and dolphins, 150 types of fish and three turtle species. New Zealand will monitor the sanctuary via its navy and satellite technology.

The precision offered by advanced technology and data gathering will clearly help and, for conservation research in the Haruaki Gulf, the most advanced available technology is already in service. Its capabilities will provide reliable information for the front-line research done by PhD and Masters students onboard Dolphin Explorer.

“In the Hauraki Gulf, we have been involved in ground-breaking research that will form the basis for future population studies. We need to be exact when we measure how the whale population has recovered from large scale commercial whaling and to gauge the true impact on the larger mammal infant populations of the toxins dumped into the world’s oceans.

“The long-term study of the marine environment has only been going on for around 25 years, which is half the lifetime of a common species of dolphin. When 2,000 dolphins are around the boat, or we sight killer whales 10 minutes after we leave the wharf, people are often stunned and get a much better appreciation of their surroundings and why they need to be protected. New technology supports us in terms of operational efficiency, but its deployment is also vital to track our activities for downloading by university researchers.”