NASA Contemplates Exploring the Oceans - On Another World

NASA has recently announced $600,000 in funding for a study into the feasibility of sending swarms of miniature swimming robots (known as independent micro-swimmers) to explore oceans beneath the icy shells of our Solar System’s many “ocean worlds”. But don’t imagine metal humanoids swimming frog-like underwater. They will probably be simple, triangular wedges.

Pluto is one example of a likely ocean world. But the worlds with oceans nearest to the surface, making them the most accessible, are Europa, a moon of Jupiter, and Enceladus, a moon of Saturn. 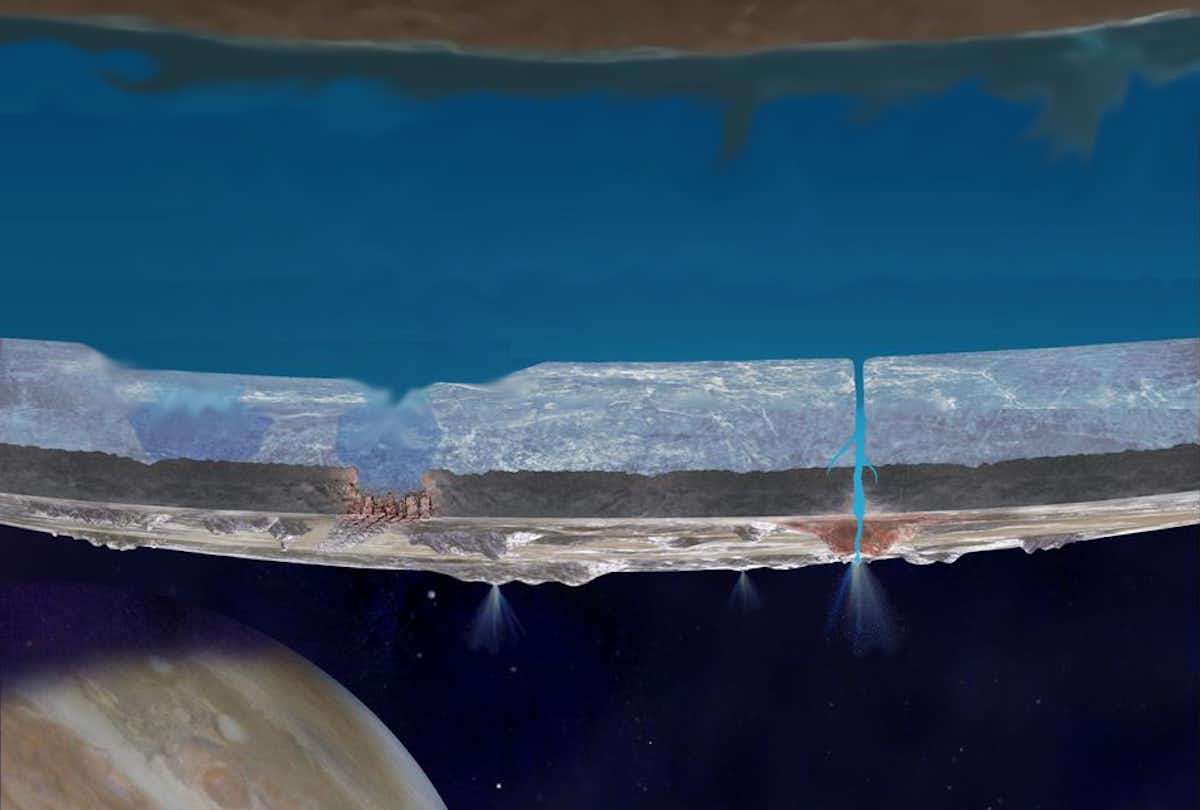 Cross-section through the outer zone of Europa’s south polar region showing plumes, the fractured ice shell, the liquid water ocean (cloudy at the base near hydrothermal plumes) and the rocky interior. Nasa/JPL

These oceans are of interest to scientists not just because they contain so much liquid water (Europa’s ocean probably has about twice as much water as the whole of Earth’s oceans), but because chemical interactions between rock and the ocean water could support life. In fact, the environment in these oceans may be very similar to that on Earth at the time life began.

These are environments where water that has seeped into the rock of the ocean floor becomes hot and chemically enriched – water that is then expelled back into the ocean. Microbes can feed off this chemical energy, and can in turn be eaten by larger organisms. No sunlight or atmosphere is actually needed. Many warm, rocky structures of this sort, known as “hydrothermal vents”, have been documented on Earth’s ocean floors since they were discovered in 1977. In these locations, the local food web is indeed supported by chemosynthesis (energy from chemical reactions) rather than photosynthesis (energy from sunlight).

In most of our Solar System’s ocean worlds, the energy that heats their rocky interiors and prevents the oceans from freezing all the way to the base comes principally from tides. This is in contrast to the largely radioactive heating of the Earth’s interior. But the chemistry of the water-rock interactions is similar.

Enceladus’s ocean has already been sampled by flying the Cassini spacecraft through plumes of ice crystals that erupt through cracks in the ice. And there are hopes that Nasa’s Europa Clipper mission may find similar plumes to sample when it begins a series of close Europa flybys in 2030. However, getting inside the ocean to go exploring would potentially be much more informative than merely sniffing at a freeze-dried sample. 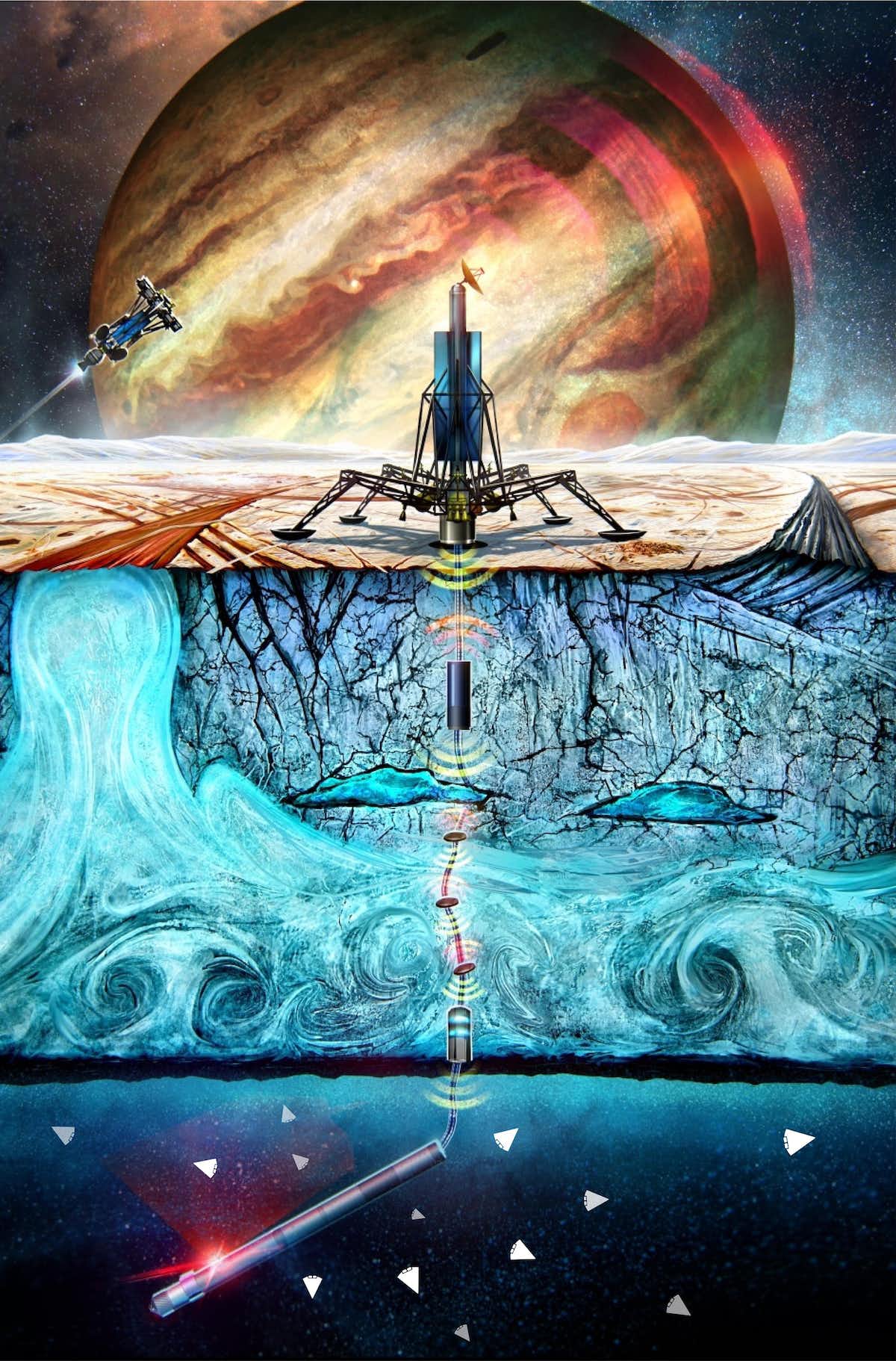 A lander of Europa uses a probe to melt a hole through the ice, which then releases a swarm of swimming robots. Conceptual impression, not to scale. Nasa/JPL-Caltech

This is where the sensing with independent micro-swimmers (Swim) concept comes. The idea is to land on Europa or Enceladus (which would be neither cheap nor easy) at a place where the ice is relatively thin (not yet located) and use a radioactively heated probe to melt a 25cm-wide hole through to the ocean – located hundreds or thousands of metres below.

Once there, it would release up to about four dozen 12cm long, wedge-shaped micro-swimmers to go exploring. Their endurance would be much less than that of the 3.6m long autonomous underwater vehicle famously named Boaty McBoatface, which has already achieved a cruise of more than 100km below the Antarctic ice. 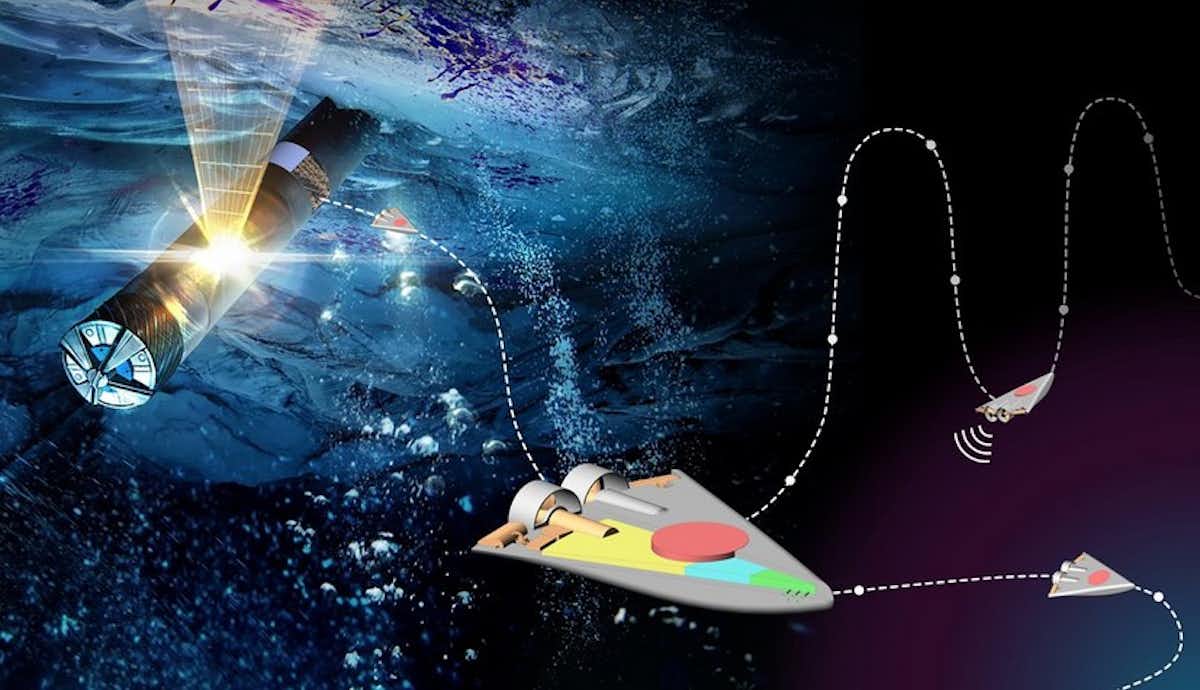 Independent micro-swimmers, deployed from a probe that has penetrated the ice crust of a moon. Not to scale. Nasa/JPL

At this stage, Swim is merely one of five “phase 2 studies” into a range of “advanced concepts” funded in the 2022 round of Nasa’s Innovative Advanced Concepts (NIAC) program. So there are still long odds against Swim becoming a reality, and no complete mission has been scoped out or funded.

The micro-swimmers would communicate with the probe acoustically (through sound waves), and the probe would send its data via cable to the lander on the surface. The study will trial prototypes in a test tank with all subsystems integrated.

Each micro-swimmer could explore maybe only tens of metres away from the probe, limited by their battery power and the range of their acoustic data link, but by acting as a flock they could map changes (in time or location) in temperature and salinity. They may even be able to measure changes in the cloudiness of the water, which could indicate the direction towards the nearest hydrothermal vent.

Power limitations of the micro-swimmers may mean that none could carry cameras (these would need their own light source) or sensors that could specifically sniff out organic molecules, though. But at this stage, nothing is ruled out.

I think finding signs of hydrothermal vents is a long shot, however. The ocean floor would, after all, be many kilometers below the micro-swimmer’s release point. But, to be fair, pinpointing vents is not explicitly suggested in the Swim proposal. To locate and examine the vents themselves, we probably do need Boaty McBoatface in space. That said, Swim would be a good start.

David Rothery is Professor of Planetary Geosciences at The Open University.