Officials at the Murmansk Commercial Seaport have raised a fence they hope will trap the soot rising from the coal stockpiles laying by the ton on its quays to be loaded onto ships – long the bane of city residents.

The “black attack,” as locals refer to the coal dust, has been a headache in Russia’s Arctic capital for as long as anyone can remember. In the winter, grime arising from the port’s coal stores taints Murmansk’s snow banks and ice, creating gray rivers of filth with every thaw. For the rest of the year, the soot taints city windows with a black crust and fouls air. 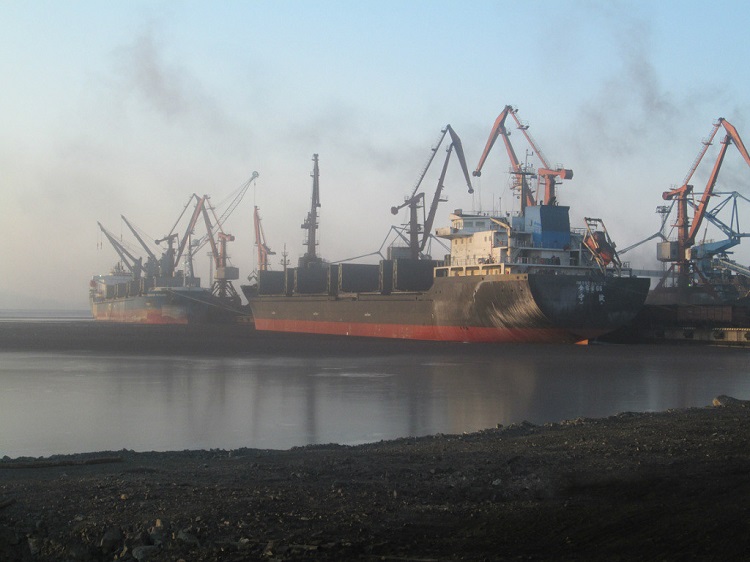 Local politicians have appealed to Moscow, hoping to forbid the open handling of coal at the port — the process responsible for raising most of the dust. In recent years the amount of coal the port handles has increased — reaching 15.5 millions tons last year alone. All of this is shoveled onto ships by cranes, unleashing plumes of dust onto the center of a city of 300,000 residents.

The problem has escalated to the point where Vladimir Putin himself said alleviating the coal dust in the air around Murmansk was one of his main priorities in a speech he gave in nearby Kaliningrad.

Putin’s attention was originally drawn to the issue during his yearly call-in program, called “Direct Line,” where he sits for hours on national television and fields hand-picked telephone complaints.

During one episode, a call came from a little boy from Nakhodka, a coal port much like Murmansk, who complained of the black attacks his city has to cope with. Putin then promised to make the fight against coal dust a national priority.

Ever since, Murmansk has been trying to do its part to reckon with the problem of fugitive coal dust. One method the Murmansk Commercial Seaport has used involves misting the coal piles on its quays with enormous, jet-engine-like water cannons in hopes of tamping down rising coal particles.

But, the complaints of Murmansk residents about the port’s filth have only been on the rise since 2012 – the year the port began to handle higher volumes of coal.

Last week, port authorities revealed what they hope will be the solution to their coal dust problem: an enormous screen that will trap the dust before it migrates into city air.

The project was launched in September, and the mission was to provide some 500 meters of screens standing 20 meters tall by the end of this year. But this would just be the beginning. In total, the port intends to put up some two kilometers of dust fencing by 2012.

On Friday, Alexander Masko, the general director of the Murmansk Commercial Seaport, showed reporters 568 meters of the screens that the port has built thus far. He said the port had studied the experience of countries like Japan, China, Canada and Australia, which are themselves using fencing around ports that ship high volumes of coal.

The fences themselves aren’t impermeable. According to Sergei Pokrovsky, director of SMM, the company that developed the screens, they are designed to let wind pass through them, while trapping coal dust — essentially acting as an enormous filter.

Each of the screen panels, he said, are placed at a certain angle, which creates a vortex while the wind passes through them. Airborne coal dust then gets caught in that vortex and adheres to the screen before blowing into the city. From there, the port simply washes the screens from time to time.

These are the first such screens built around any of Russia’s coal shipping ports, and if they work, they might find application in other ports, like Nakhodka, for instance.