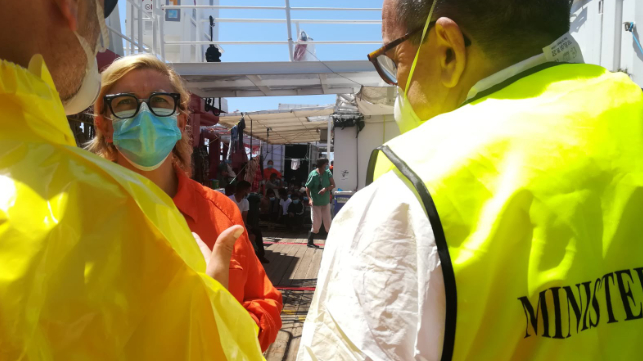 Officials at the Murmansk Commercial Seaport are taking another shot at reducing the smog of soot that wafts into the city every time port workers load a ship full of coal bound for export to other countries.

The “black attack,” as locals call the coal dust, has been a headache in Russia’s Arctic capital for as long as anyone can remember. In the winter it taints snow banks and ice, creating gray rivers of filth with every thaw. For the rest of the year, the coal paints a black crust on city windows and fouls the air.

Local politicians have meanwhile petitioned Moscow to forbid the transfer of coal via Murmansk unless it is enclosed in something, instead of housing it in enormous heaps out in the open, but that has largely come to nothing,

The problem has gotten so bad in recent years that Vladimir Putin himself last year said alleviating the coal dust in the air around Murmansk was one of his main priorities in a speech he gave in nearby Kaliningrad.

Putin’s attention was drawn to the issue during his carefully staged yearly call-in program, called “Direct Line,” when he sits for hours on national television and fields hand-picked telephone gripes from his frustrated citizens.

Last year, a little boy from Nakhodka, a coal port much like Murmansk, was selected to air his complaints about the black attacks during the show – which led to Putin singling out the fight on coal dust as a sort of national initiative.

So how is the Murmansk Commercial Port doing a year after its soot was thrown into the national limelight?

To be fair, officials at the port don’t deny the problem and have tried for years to both tamp down the dust and soothe the indignation of Murmansk’s residents.

Some of the methods they’ve tried include enhanced irrigation systems and more and more dust suppressing cannons – a system by which a fog of moisture is shot through something resembling a jet engine onto then mountainous piles of coal awaiting transfer from the port.

Now, however, they have hit on something else – a method they say will reduce the amount of coal dust drifting into city air by as much as 90 percent: Enormous screens around the port to help trap the dust and keep it in.

At a briefing this week, Alexander Masko, the general director of the Murmansk Commercial Seaport, said the screens were one of about 12 projects meant to improve the environmental impact of the Port, all of which are expected to cost around $44 million.

But he said the biggest immediate benefit would be offered by the screens, which he said will stretch some two kilometers and stand 20 meters high. The first 500 to 600 meters of screening is supposed to be complete by the end of this year.

Still, the port continues to draw the ire of local residents. For the past year, the port has operated its coal shipments wihtout doing much to police the sanitary zone in which the coal is stored – leading to more black attacks.

When asked about this at the briefing, Masko said the port was nonetheless operating within the guildlines of current legislation.

This article appears courtesy of Bellona and may be found in its original form here.

After multiple appeals and days of waiting, Italy has given the green light for the migrant rescue ship Ocean Viking to enter port and offload nearly 200 rescuees. The reversal comes after Ocean Viking's operator declared a "state of emergency" on board due to a series of suicide attempts.  "The ship has finally received instructions to proceed to Porto Empedocle, Sicily. The 180 survivors will be disembarked in the port tomorrow," said operator SOS Mediterranee in a social media post....