Lessons From 40 Years of Missile Warfare: HMS Sheffield to the Moskva

The recent loss of the Russian Navy guided missile cruiser RFS Moskva from a cruise missile strike called forth many comparisons to previous losses of large surface combatants, including the Argentine cruiser ARA General Belgrano and even the Japanese super dreadnought Yamato. Only a few however remembered the HMS Sheffield from the Falklands War. While Moskva was a large and capable surface warship that invited comparisons with the losses of larger combatants, the Russian cruiser’s demise may have much more in common with that of the Royal Navy Type 42 destroyer than Belgrano or any World War II warship.

The birth of the modern cruise missile in the Cold War, and the many sensors, communication tools, and other systems needed to use or defend against anti-ship missiles set the stage for a whole new era in naval warfare. A series of unfortunate events laid the British warship open to attack and a similar version of those events may have doomed Moskva as well. Modern warships are very much “eggshells armed with hammers” and even one hit is enough to put the ship out of combat action or cause her sinking. As the 40th anniversary of the first successful cruise missile attack of the Falklands War recently transpired, it is useful to review the fate of HMS Sheffield to understand what her loss and the loss of the Moskva mean for war at sea now and in the future.

Air defense is one of the most challenging warship missions in the current environment of cruise and ballistic missiles, as well as conventional aircraft threats. Sheffield and Moskva were both on the front lines of their respective wars serving as air defense units protecting other ships from air and missile attack. Sheffield acted as a picket vessel with the mission of engaging any aircraft and missiles that threatened the British task group aircraft carriers HMS Hermes and HMS Invincible. Moskva’s task organization is unknown, but as the Black Sea Fleet’s best air defense warship she likely would have been providing air and missile defense for other nearby Russian warships.

A warship’s defense posture matters greatly in her ability to effectively respond to air and missile attack. That readiness may also depend on other ships in the same task group.

Sheffield was nominally prepared to respond to air and missile attack, but several factors limited her responsiveness. According to the post-attack investigation and subsequent revelations, Sheffield’s anti-air warfare officer was out of the operations room at the time of the attack, and a satellite telephone call caused interference with the ship’s electronic support measures (ESM) gear. That disruption blinded the ship’s ability to “see” the inbound missile and by the time lookouts identified the attacking weapon it was too late for Sheffield to respond with weapons and countermeasures.

Sheffield’s crew might have been excused for that issue, except a battle was raging around them at the same time with other British task force units tracking supposed missile contacts. The other British air defense destroyer HMS Glasgow was in the process of trying to identify an air threat to the group, but the time from the start of Glasgow’s engagement of the unknown aircraft to impact of the Exocet missile fired by one of those aircraft was less than 3.5 minutes. Missile warfare is fast-paced and any degradation in readiness can be fatal.

Moskva may also have been engaged in normal activity that masked the ability of her onboard sensors as did Sheffield’s satellite phone call. Moskva may have disregarded the threat of air and missile attack to the point that, like the later cruise missile victim USS Stark (also hit by Exocet missiles in 1987), her defenses were turned off and not available.

Warships must always be vigilant in littoral waters where the risk of cruise missile attack is greater due to closer range to shore-based platforms and limited time for response. The Israeli corvette Hanit escaped severe damage or loss from such a surprise attack in 2006 only because the missile did not arm and struck a glancing blow.

What history shows us is that many warships that have fallen victim to anti-ship missile attacks were struck because of poor readiness and situational awareness. These ships were not struck because their defenses could not hold their own against overwhelming missile salvos. Rather, these ships were struck by exceedingly small salvos of only one or two missiles, attacks they were expected to be able to manage. But poor readiness and awareness resulted in their defenses being virtually absent from the engagement, allowing small missile strikes to wreak enormous damage. 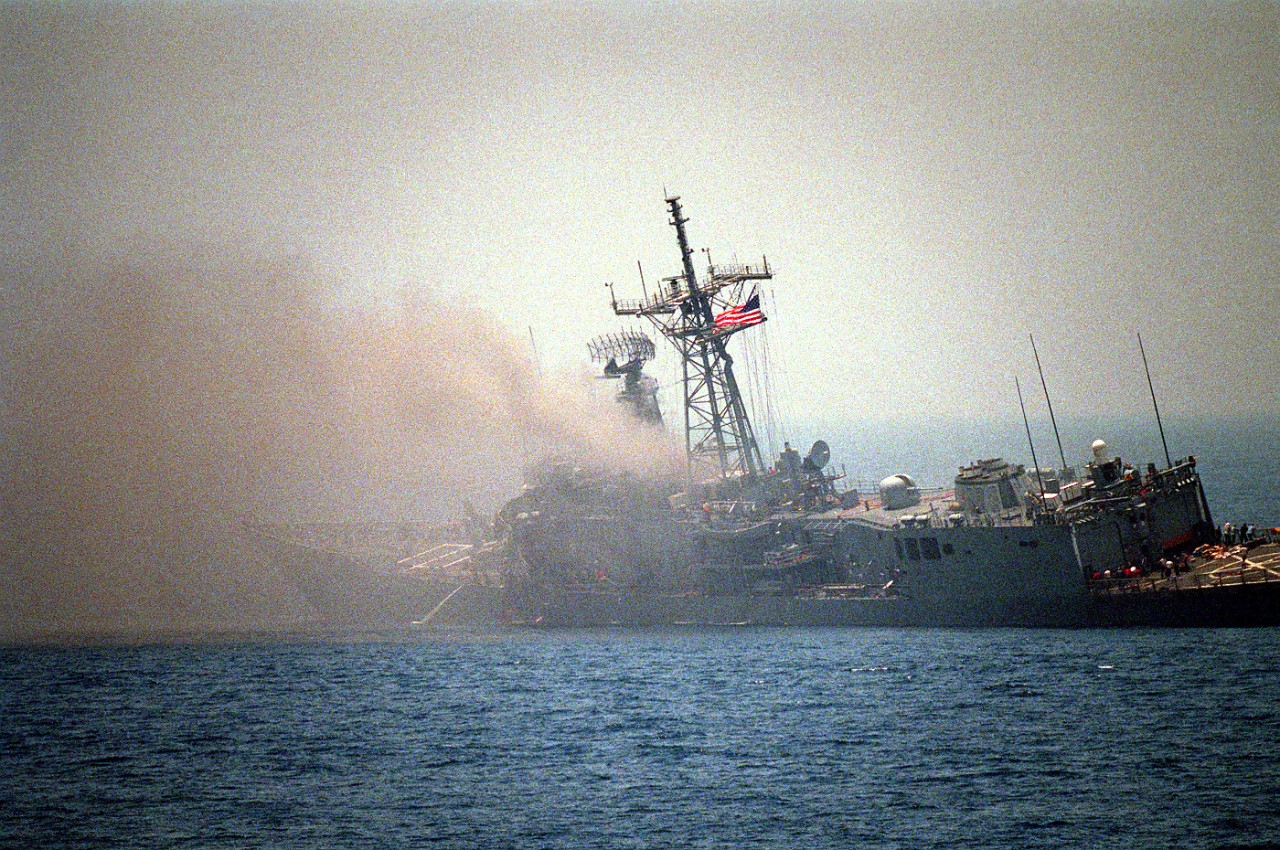 Winston Churchill was perhaps one of the first recorded personalities to describe modern warships as eggshells with hammers, but his description is even more valid today than when he was first quoted as saying it in 1914. Heavy armor for the sides (armor belts,) decks, gun turrets, conning towers, and other critical command and control or engineering sections was common in warship construction from the period of the American Civil War through the end of World War II. While evaluations of armor effectiveness were mixed, it was assumed that some amount of steel plate was useful in protecting large and medium warships from damage. Destroyer-sized ships and smaller lacked much armor, but still had some additional protection around gun mounts.

Today by contrast only the largest ships such as aircraft carriers have armor. HMS Sheffield was a destroyer but was larger than her World War II counterparts and might have carried armor. Moskva was a cruiser and previous cruisers had moderate armor protection, but the Russian cruiser too was unarmored. What changed to the point where most warships eschewed armor protection altogether, especially in the face of cruise missile attack?

The addition of missiles and the electronic tools needed to search for opponents and guide weapons to targets fundamentally changed warship design in the early Cold War. Missiles were not turret mounted, and at first were fired from rotating launchers and later from vertical tubes inside the hull. Sensors needed to be placed on tall masts, and to keep the ship stable, the missiles and other heavy gear needed to be mounted lower in the ship. This suggests armoring a ship’s hull, but weapons technology changed in many ways with the introduction of the missile. These weapons were large in the case of those designed as ship killers with even early versions possessing 1,000-pound warheads. Some anti-ship missiles can strike a ship at supersonic speeds and deliver an amount of kinetic force that rivals battleship shells. Later variants possessed shaped-charge warheads that upon impact inject a superheated molten jet into the armor, melting a hole for the rest of the warhead to follow. (The Javelin missile employed so effectively by Ukrainian troops against Russian tanks has a shaped-charge warhead.)

In addition, the introduction of nuclear weapons served to make armor pointless. While target ships survived terrible atomic test blasts, the radiation from those weapons could not be deflected and would have killed crews without the weapons that carried them penetrating the ship. 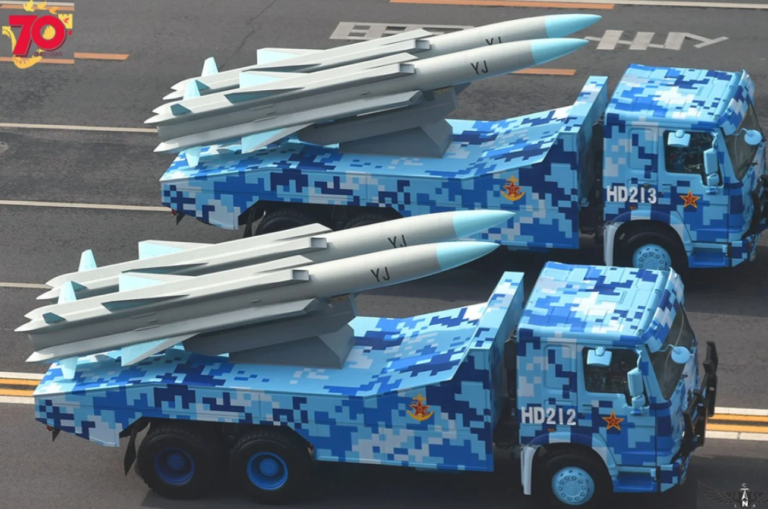 Once a missile penetrates and explodes, the damage it inflicts can rapidly immobilize or render a warship unusable. The Exocet missile that hit Sheffield did not explode, but it ruptured a fuel oil tank and fragments from the impact ruptured the ship’s firefighting water system. Deprived of water to fight fires, the crew of the Sheffield were driven from the ship to its exposed decks forward of the bridge and aft of the helicopter hanger; a situation that hampered firefighting efforts.

Moskva’s final pictures also show heavy damage from missile impacts in the middle of the ship (amidships) and many scorch marks emanating from port holes and other undamaged sections suggesting a massive fire. Commercially available wargames have also suggested that the Slava-class cruiser (Moskva was named Slava before her 2000 refit) could survive multiple cruise missile hits, but in this case seems to have succumbed to just two hits from medium-sized weapons.

This is not surprising and not a new development. The robust warships from the World War II era, including capital ships, could be immobilized with one or two torpedo hits as well. Even one cruise missile hit can be disastrous to a small or medium-sized ship as evidenced by the 2016 cruise missile attack on the former U.S. High Speed Vessel Swift, then operated by the United Arab Emirates (UAE.) Even an unarmed drone can make a large hole in a ship as evidenced by the 2013 accidental collision of a 270lb target drone and the cruiser USS Chancellorsville during a tracking exercise.

Moskva may still have been filled with flammable paneling in her officer’s quarters and had poorly maintained damage control gear as one of the author’s NATO colleagues reported after a 2007 visit to the ship. But most warships today other than large aircraft carriers qualify as eggshells armed with hammers.

Sheffield and Moskva: A Common Fate?

The Sheffield, like Moskva, was not immediately sunk by her cruise missile hit, but instead lingered for several days until she sank in rough seas whilst being towed toward South Georgia island for emergency repairs. Moskva too appears to have initially survived but sank later, and it does not take too much change in weather to sink a heavily damaged warship.

The continuing lesson to be learned from cruise missile warfare is what legendary naval tactics professor Wayne Hughes taught his students for nearly four decades. Hughes always said, “attack effectively first.” Do not be on the receiving end of a cruise missile attack as history suggests there may be only minutes or even seconds to respond. The opposition must be denied the information that allows them to target and fire upon warships with confidence, while priority must be given to securing similar targeting information for one’s own forces to fire first.

Sheffield could not see the missile that fatally damaged her until it was too late to respond and Moskva may have suffered a similar fate. Advanced cruise missiles are now part of many nations’ weapon arsenals and continue to improve in terms of speed, maneuverability, range, and effectiveness. The lessons from both the Moskva and Sheffield cruise missile attacks are not new revelations for naval warfare, but rather the timeless reminder that those who do not prepare their ships and crews to face the most prevalent threats may suffer a tragic fate.