Who doesn’t love a good story, especially one about amazing discoveries in Earth’s farthest reaches? Oceanographer, Navy veteran and explorer Robert D. Ballard has written a memoir, “Into the Deep,” that recounts many of his dramatic discoveries, including locating the wreck of the luxury ocean liner Titanic in 1985.

Ballard, now 79, is known for designing and using many types of vehicles for underwater exploration. His most important scientific contributions include mapping regions of the mid-Atlantic Ridge, an underwater mountain chain that runs north-south through the Atlantic ocean, and locating hydrothermal vents in the eastern Pacific. These underwater hot springs form at cracks in the ocean’s crust, where superheated water jets upward from Earth’s interior. Finding them changed scientists’ thinking about the evolution of life on Earth and the chemistry of the ocean.

Robert Ballard explains the importance of exploring the world’s oceans

I’m a geoscientist who studies Earth’s oceans and climate and first met Ballard when I worked at the Woods Hole Oceanographic Institution in 1978. I’m keenly aware of his contributions to ocean science, as well as his work to popularize ocean exploration and inspire people to become scientists. “Into the Deep” captures much of what it’s like to do this work, including less glamorous aspects like raising money, building research teams and standing watch on deck for hours. Science, especially marine research, is not a solo effort – and the discovery of hydrothermal vents is a prime example.

In the early 1970s, when Ballard was doing his graduate work in marine geology and geophysics, scientists were still refining the basics of plate tectonics theory. One key idea was that new ocean crust was created at spreading centers in the seafloor, where oceanic plates moved away from each other and magma from Earth’s interior welled up between them.

A 1972 study of a spreading center in the eastern Pacific, near the Galapagos Islands, observed that the water temperature was slightly warmer near parts of the spreading center – a surprising find at depths of 8,000 to 9,000 feet (2,440 to 2,750 meters) – but cooled rapidly as it flowed away from the site. This suggested that hydrothermal vents might be present.

In 1974 Ballard took part in Project FAMOUS, which used the U.S. manned submersible Alvin and a French submersible to explore the Mid-Atlantic Ridge. Researchers descended 8,000 feet into deep rift valleys on the ocean floor, and ascended to the adjacent rift mountains at depths of about 3,300 feet (1,000 meters). Fresh basalt suggested recent volcanic activity and the creation of new ocean crust, but their survey did not locate hydrothermal vents. 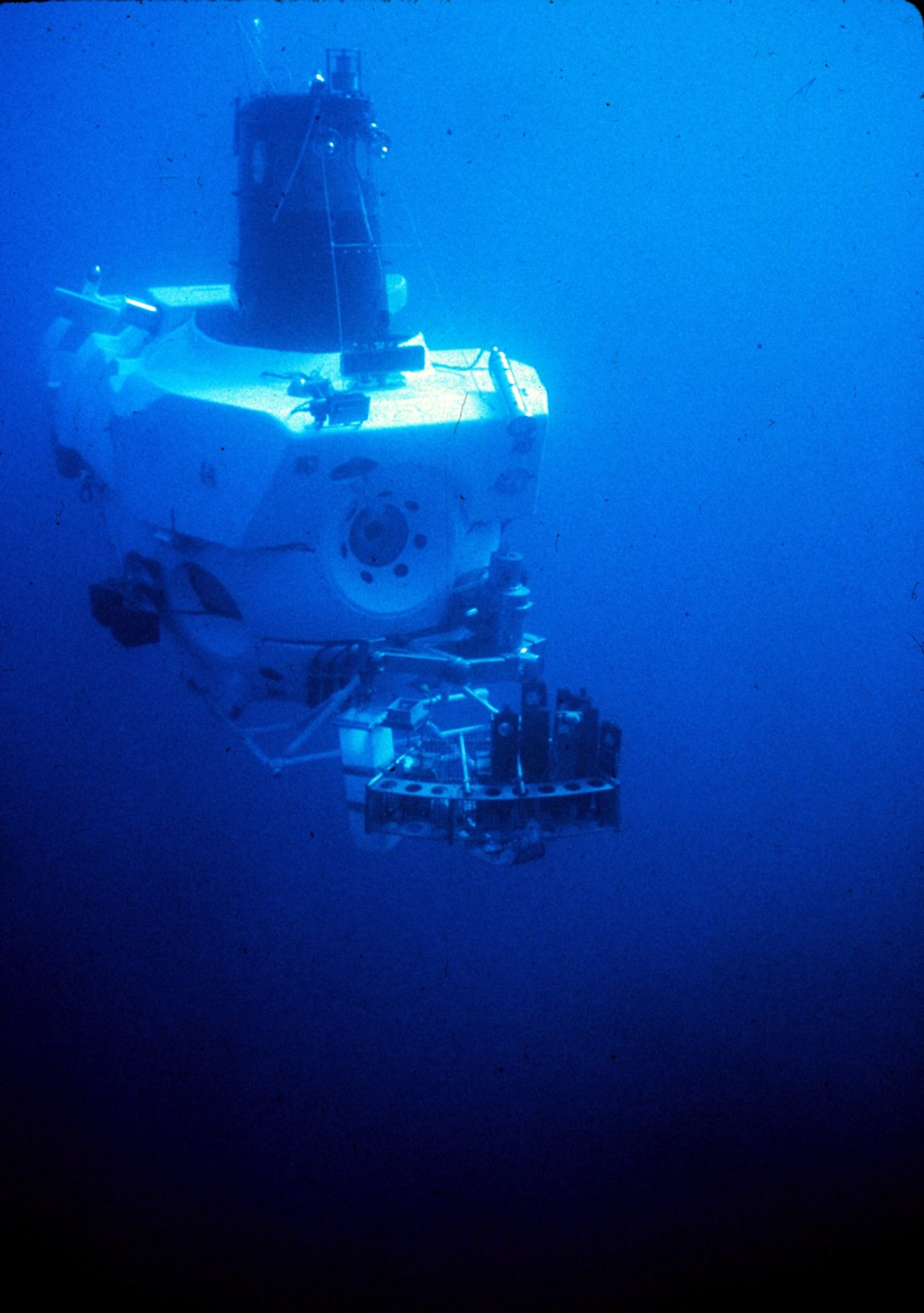 Meanwhile, other researchers were exploring the Galapagos spreading center. In 1976 Kathleen Crane, a graduate student at the Scripps Institution of Oceanography, investigated marine heat flow in that area for her doctoral research. To do this she navigated an elaborate deep-ocean exploration machine, Deep Tow, which was pulled behind a research vessel near the ocean floor and transmitted data back to the ship.

A year later, scientists returned to the area with Alvin and a different deep-towed vehicle, ANGUS, that could travel closer to the ocean floor, providing better photographs and thermal measurements. Ballard and Crane both were on this expedition, along with other researchers from Oregon State University, MIT, Stanford, the Woods Hole Oceanographic Institution and Scripps.

The new photographs allowed the scientists to pinpoint the most important dive sites. They made 24 dives in Alvin. At the hot spots, they were stunned to find dense clusters of shellfish, anemones, crabs, tube worms and other organisms around vents in the ocean floor where hot water rose up from below. Analysis showed that these organisms were performing chemosynthesis – creating energy from chemicals in the seawater, in complete darkness.

Hydrothermal vents are located in cold, dark waters but they support rich and diverse ecosystems that live off chemicals flowing from the seafloor

Disappointingly, all that Ballard says in “Into the Deep” about Crane’s role in this discovery is that researchers from Scripps had scanned the area in 1976 using Deep Tow and “detected a few subtle temperature anomalies.” In the scramble for credit in important scientific discoveries it can be difficult, if not impossible, to clearly identify who made the discovery. In a collective effort, who should be recognized?

Crane, whom I have known since 1978, was listed as a co-author on the 1979 paper in the journal Science that described the hydrothermal vents, and went on to a distinguished career studying oceans and the Arctic. But her role in this discovery has received relatively little credit in popular accounts. As I see it, Ballard’s memoir would have been a perfect opportunity to acknowledge her contribution to one of the most important ocean science discoveries of the 20th century.

Ballard received much wider acclaim when he led the expedition that found the RMS Titanic in 1985. This trip was financed by the U.S. Navy – not out of interest in the Titanic, but as an add-on to secret studies of the wreckage of two nuclear-powered attack submarines, the USS Scorpion and the USS Thresher, which sank in the 1960s.

On Sept. 1, 1985, Ballard and his team captured the first photos of Titanic’s remains, 2.4 miles (3.8 kilometers) below the Atlantic Ocean’s surface and almost 400 miles (600 kilometers) south-southeast of Newfoundland. They found the wreck using Argo, a new deep-towed sonar and video camera system, to search back and forth over a 100-square-mile area of the seafloor. Ocean scientists call this process “mowing the lawn,” hoping and praying that something new will be revealed.

After Titanic, Ballard tracked down other well-known lost ships. In 1989 he and his crew located the Bismarck, a German World War II battleship sunk by Allied forces in the North Atlantic in 1941. And in 2002 they found PT-109, the patrol boat skippered by 26-year-old John F. Kennedy, which sank in the South Pacific in 1943 when it was rammed by a Japanese destroyer.

By 2008 Ballard had led five expeditions to the Black Sea, where oxygen-depleted deep water preserved ancient vessels and their cargo. Scientists are still probing and analyzing these archaeological time capsules.

All hands on deck

In recent decades, Ballard has put much effort into increasing diversity in oceanographic exploration and research, especially gender diversity. The Jason Learning project, which Ballard founded in 1989 to spark K-12 students’ interest in science, technology, engineering and math through the excitement of ocean research, features many women. His Ocean Exploration Trust research vessel, the E.V. Nautilus – named after Captain Nemo’s submarine in Jules Verne’s classic “Twenty Thousand Leagues Under the Sea” – has many women as permanent crew members, something that would have been unheard of 50 years ago.

For me, working with a skilled crew of scientists and technicians aboard ship is one of the most exciting aspects of marine research. No one can be an expert on all of the components of our planet’s amazing ocean system, from tiny plankton floating in surface currents to tectonic plates spreading and colliding underwater. Being at sea with other marine scientists has provided tremendous joy in my career.

There is a lot to discover about the ocean, and we need all kinds of talent to do it. Ballard’s talent lies in his construction and use of remotely operated vehicles to explore the seafloor, and his storytelling and fundraising capabilities, which provide inspiration for future generations of ocean explorers.

Suzanne O'Connell is a professor of earth and environmental sciences at Wesleyan University.