In one of my previous articles I arrived at the conclusion that container shipping is an industry that is mixing up size with growth. Technological advancements lead to economies of scale and lower unit costs for larger assets, but not to economies of growth for the firm because it deteriorates the return of investments of existing assets.

In the past few months major events among container liner operators underscored this conclusion. Hanjin, a Korean colossus in container shipping went bankrupt, three Japanese shipping companies announced to merge their container operations, and captains of industry openly speak of ending the long period of overcapacity. Even AP Moller-Maersk decided to split up its main lines of business to survive what the firm calls ‘the Perfect Storm’.

Now that the major players are making a hard landing, it is time to pose the question whether the sector is able and ready to re-establish its role in society.

A systems change for container shipping

Following the logic of the Theory of the Growth of the Firm by Penrose, she rightfully places firms in the middle of society. Disruptive events such as the bankruptcy of the seventh largest container shipping line in the world sends shockwaves through thousands of supply chains that connect producers to consumers, traders and transporters.

Once again, it makes us realize that a firm is not a standalone vehicle which is there to enlarge profit for the sake of a small group of shareholders, but it is a vehicle which serves the needs of society to efficiently allocate resources - manpower, capital, expertise, management capabilities - to economic activities in such a way that not only firms grow, but that also society is allowed to benefit from the firm's capabilities to offer cheaper and better products and services.

A bankruptcy of such a vast scale as Hanjin and with such a global reach is a proof of systems failure in a sense that such firms together with their stakeholders have been holding on too strong to a belief that they are too big to fail, expecting governments to back them up. This appears particularly true in South Korea, since that government is also aiding the huge shipyards producing ships likely much too cheaply.

Having said this, it triggers the question whether there are more of such dominant logics that we hold for granted in container shipping, while actually lacking a societal foundation? What are the economies from the perspective of efficient utilization of society's assets when vessel size increases, unit costs go down, but societal costs go up? What are today’s other free lunches for container shipping?

Cascading down ships to smaller trades

Most of the mega vessels are built for the largest trades in the world, i.e. Far East-Europe and Far East-Pacific. When bigger ships enter the market in main trades relatively smaller ships cascade down to smaller trades, as the return on assets of older vessels is higher compared to the newer, larger more efficient ships.

For large operators, adding bigger ships often allows them to increase their market share. The problem here is that economies of scale of the largest vessels work against the return on investment for midsized vessels. A larger vessel with lower cost per unit diminishes the value of a midsized vessel that has already been in service for some years.

As a consequence, the shipowner would want to get rid of the predated vessel, find employ elsewhere, lay it up temporarily or bring it to scrap at an earlier age. All of this is what we see happening today. In the last five years, average vessel size has rapidly scaled up in smaller trades [figure 1], with maximum size vessels going up to 9,200 TEUs, e.g. by MSC on the Far East – West Africa trade. 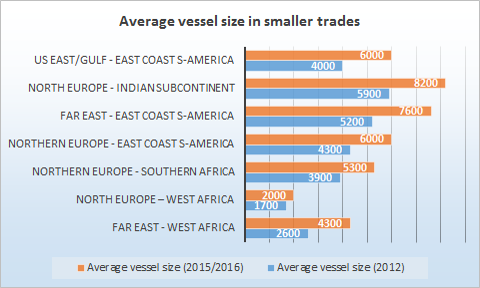 As larger newbuildings enter the market, old tonnage leaves the market. Nothing new, insiders would say, as the market for ship demolitions is broadly recognized as the fourth segment of the shipping market.

When Maersk Line introduced the Triple-E class vessels, 10 in 2013-2014 and 10 in 2014-2015, this initiated a rat race for economies of scale, energy-efficiency and environmentally improved vessels in the industry. Other liner operators followed.

At the same time size increased more ships went to scrap, as is illustrated in a recent graph compiled by Alphaliner. In fact in November 2016 year-to-date total scrap volume reached 500,000 TEUs, a record never seen before in one year. From a business perspective it all makes sense to sell off ageing assets, however this rationale fades when assets are made obsolete at ever earlier ages.

It is like ships are suffering a midlife crisis and the only option is to bring them to a graveyard. Scrapping of midlife ships is not only a matter of financial depreciation. Demolition of a seaworthy asset in itself can be considered as capital destruction and degradation of societal capital. All value generating activities in the conversion process from raw materials to a capital-intensive asset go to waste in a relatively short life span. Societal costs for such common business practices even become higher considering the rather unsafe conditions at Asian beaches and shipbreaking yards where most vessels are scrapped. 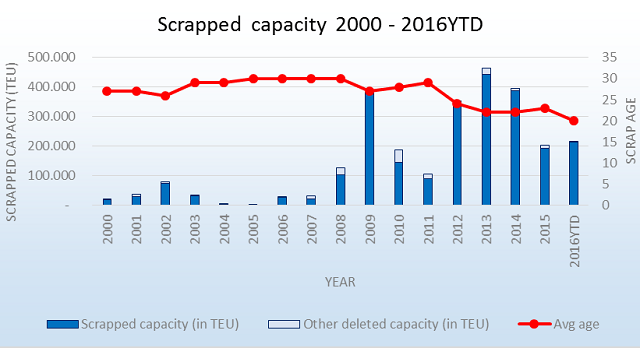 Provided that larger ships bring lower unit cost per TEU, these efficiencies favor imported goods, when we take into account trade imbalances on the North-South Trades. For every 100 imported containers from the Far East, West Africa ships out 21 overseas. On the trade from North Europe to West Africa and Southern Africa, this imbalance amounts to 35 and 52 containers respectively (DynaLiners Trade Review 2016).

This imbalance does not only show that African products still face barriers to participate in global supply chains, but bigger vessels also lead to a comparative disadvantage for local manufacturers to compete with imported goods flooding home markets because it makes imported goods cheaper as unit costs per imported TEU go down.

Shipping professionals always associate larger ships with higher efficiencies. In 2015, OECD/ITF threw the stone in the pond by pointing out the opposite. One of the principles of supply chain management is to aim for minimizing stock levels and maximize service levels works, which works best with more frequent but smaller shipments. This allows the entire supply chain system to be more responsive, to synchronize processes, to minimize buffers and waiting times and to optimize capacity of infrastructure and transport equipment for pre- and on carriage in the hinterland.

For logisticians to see benefits from bigger ships for the entire supply chain is counterintuitive. Such proposition is not likely to happen. It leads to more inefficient rather than efficient door-to-door supply chains. The magnitude of these inefficiencies becomes even bigger in ports in developing countries which are already suffering from both an infrastructure and a logistics competence gap. Refer to the logistics performance index of WorldBank for more details on these crucial gaps for sustainable development of these countries.

Cascading down larger ships to smaller trades necessitates port infrastructure which adds scale but disproportional societal value. Governments in these developing countries support such infrastructure projects, often backed up by financial institutions such as World Bank and more recently by Chinese (state-owned) construction companies and lenders, thereby providing shipping companies with a free lunch, while ignoring logistics inefficiencies on the hinterland side that might have a bigger impact on the entire door-to-door transport system.

In conclusion, what is the societal business case when vessel size increases, unit costs go down, but societal costs go up? Now that container liner operators seem to have come to terms with ending the unlimited expansion of fleet capacity there are still many ‘free lunches’ for container shipping.

Who is providing these free lunches to shipping companies?

Actually there is a big institutional void which is created by ambivalent governments and reluctant citizens. Governments are on the one hand slow to ratify international conventions, sometimes choose to back up port and transport infrastructure projects for prestige, choose to back up loss making shipping companies or sometimes look away from poor safety conditions and harmful environmental business practices at shipyards. For beneficiary cargo owners (shippers) and their customers price most often prevails over People and Planet.

Is there an answer to these issues? Yes there is, but the first step towards a resolution – solutions do not exist for such wicked problems – is awareness that a societal business case requires incorporating ecosystems services. Expressing societal value into so-called ecosystem services could help factoring in the negative externalities of shipping.

In today’s global transport system ecosystem services deliver value, but come at zero cost for firms within the shipping markets. There is value for users in the system at zero cost to burn heavy fuel oil, thereby emitting carbon dioxides, sulfur dioxides, nitrogen oxides and other pollutants into the air.

There is value for firms to sell off second hand ships to cash buyers and demolish ‘midlife crisis’ ships to scrap, but no cost for degradation of coastlines and surface water pollution.

There are economies of scale to build bigger ships but at a higher cost for the entire supply chain and at the expense of local smallholders.

Under the responsibility of the IMO incremental steps are being made. Some liner operators do make steps to cut down on CO2 emission. But the process to arrive at this point illustrates the reactive perspective of the industry and governments. The Ballast Water Management Systems Convention will only enter into force in September 2017 after lengthy negotiations which started as far back as in 1991.

The same lengthy process is likely to happen with the Hong Kong Convention on (green) ship recycling dating from 2009 which sets requirements in terms of environment and safety for workers but has yet to be ratified. "Renewed momentum in the IMO [...] is needed more than ever towards next years’ COP 22" as Morten Engelstoft, CEO of AP Moller Shipping Services concluded after the Paris agreement on climate change was accepted in December 2015.

The shipping markets framework set forward by Stopford in his second edition of Maritime Economics in 1997 explained the cash flows within and between four segments of the shipping market (ref figure 3). Now 20 years later, it is worthwhile challenging his framework and making the model more inclusive in terms of the issues and impact global shipping activities have on the planet. By including ecosystems as the fifth marketplace and bring ecosystem services into the equation, it allows to offset cash value against ecosystems value. 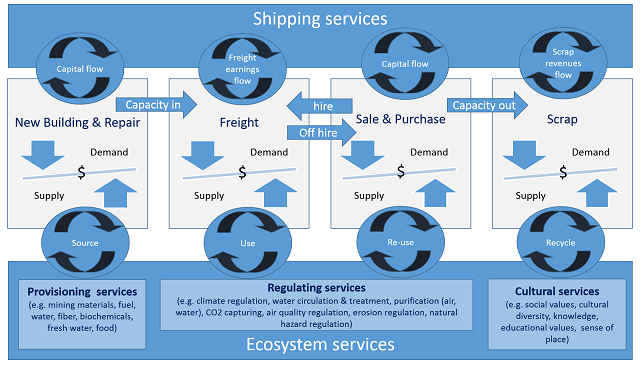 Economies of scale do not trickle down to society

The bottom line is that the container shipping industry including their stakeholders have been holding on too long to a belief that the benefits of economies of scale would trickle down to the rest of the supply chain and society at large. The opposite is true. For society to benefit, it requires a holistic inclusive view on inefficiencies in the global transport system, and how resources can best be utilized, not just for the most dominant part of the system, but foremost for the weakest links in the system.

Whether the sector is able and ready to re-establish its role in society is a matter for firms to consider value over cash. At the same time it depends on society - beneficial cargo owners in the first place as well as their customers - to be willing to pay an additional price for the added value these firms return to society.

Wicked? Indeed, a systems change is what is at stake.

Maurice Jansen works at STC-Group at the Innovation, Research & Development department. He lectures at Netherlands Maritime University and is a visiting researcher at Erasmus University Rotterdam. This article is written on personal title, with the support of shipping industry expert Theodor Strauss.