The mood is buoyant in the container ship sector, but is the market ignoring the sleeping giant?

Sentiment in the container ship markets is palpably shifting and on the back of the first quarter 2017 optimism, a roadmap to headier rates and earnings might take the following course.

First, freight rate improvements have recently moved liner operators toward profitability, whilst charter owners are seeing the first meaningful uptick in earnings since mid-2015.  Second, the scars of disappointing trade growth in 2016 are seemingly healed, whilst the imposing 2017 delivery schedule is more a hypothetical than an actual barrier to a sustained recovery.

Third, scrapping will continue at the same rate as last year (even if charter rates pick up), whilst the one million TEU idle fleet is apparently illusory. What, one asks, could go wrong?

For once, Maritime Strategies International (MSI) is taking the middle ground. We do think that a lot of the optimists are overstating their case - a notable example being those who believe charter rates will pick up rapidly - but we also assume that another 700,000 TEU will be scrapped this year.

We also think that, even allowing for a considerable amount of slippage, the 2017 delivery schedule should be cause for considerable concern. Finally, the benign assumption of relatively steady trade growth has been made for a number of years now, and whilst in 2014 trade surpassed expectations, 2015 and 2016 proved to be serious disappointments.

However, we do believe that the worst has passed for the charter market and that, on an annual average basis, 2017 earnings will surpass 2016 for large and midsize tonnage. Smaller tonnage will prove somewhat more disappointing, as we cleave to our longstanding belief that any market recovery will be led by the relief of pressure from the larger segments which are currently forming such an effective blockage preventing an earnings recovery.

The most significant, and least discussed, risk to our benign view remains the idle fleet. In blunt terms, we think that a significant recovery in earnings cannot occur until the economically active idle fleet reduces to below 400,000 TEU - as opposed to today’s level of 1.2 million TEU. 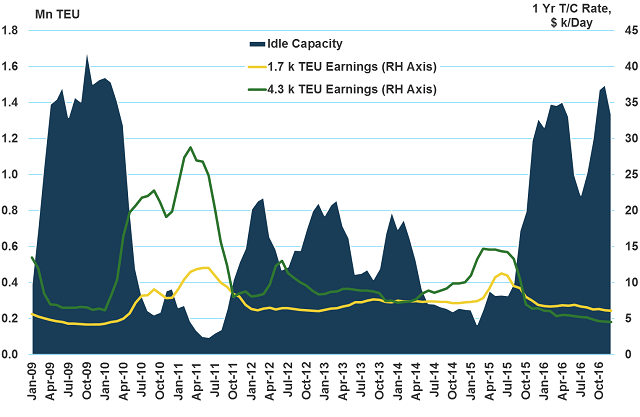 This should come as no surprise, but the wider message now is that the dynamics facing the Panamax market are more broadly replicated for all vessels above 4,000 TEU. Even the ultra-modern 11,000 TEU vessels controlled by Costamare and York Capital being completed at Hanjin Subic are struggling to find work, and it is clear that 8,000 TEU and 6,500 TEU vessels increasingly find themselves in the liquid market.

The crux of our charter-rate forecast is that idle capacity will trend down over the year, and by the fourth quarter will be below 0.5 million TEU, which will in turn push up earnings. The reduction in idle capacity is driven by our view of a tightening supply/demand balance, but critically also by liner companies taking a somewhat more proactive stance with respect to the charter market and deployment after the introduction of the new alliance system in April 2017.

Should the change in liner company behavior not materialize, then the recovery in earnings will be pushed back by about two quarters. However, in the case that the demand side recovery MSI is forecasting disappoints, then realistically a substantial upwards movement in the charter market will be postponed until towards the end of 2018.

James Frew is a Senior Analyst at MSI.