While container ships have increased in size to reduce transportation cost per container, ports have become congested increasing the amount of time required to transfer containers between larger and smaller ships, also between large ships and overland transportation. In the future, even larger container ships will require ports to develop faster methods for transferring containers off and on the super-size ships, using less waterfront port terminal area. Of the technologies being considered to facilitate faster transfer of containers at ports, the U.S. company EagleRail offers an overhead rail-based container transfer concept based on proven technology.

Any new technology intended to more efficiently and more quickly transfer containers at port would need to be based on long-proven technology. The EagleRail system has similarities to a system at the City of Wuppertal in Germany where passenger transit vehicles travel around the city along a network of overhead rails. The structural support system that carries the overhead rails involves minimal ground space and saves the cost of digging underground tunnels.

The Wuppertal system forms the basis of parcel transfer logistics technology. A freight version of the overhead railway system would move full size containers over short distances of up to six miles (10 kilometers). To properly serve the logistics sector, the technology would need to quickly move massive numbers, far exceeding the port transfer capacity of fleets of road trucks and traditional dockside railway container trains. While not interacting with surface road traffic, an underground tunnel-based container transfer system would be impractical at most maritime ports.

Future container transshipment mega-ports and related intermodal terminals will need to be located outside of main metropolitan areas, yet within easy and convenient commuting distance. There is emerging conflict between port terminal developers and developers who seek to build attractive waterfront residential areas and waterfront tourist districts in and near large cities, to also include public mass transit systems. The emerging conflict would require that future container terminals occupy less physical waterfront space while using technology that greatly increases the volume of containers that can be transferred among a variety of maritime and overland transportation vehicles.

EagleRail’s concept technology combines precedents from the Wuppertal overhead rail system with traditional, proven crane technology that is able to carry each container from above. In operation, automated cranes transfer containers from ship to an automated dock-based rubber-wheel vehicle that then moves each container under the overhead rail system before raising the container upward to attach to the overhead carrier system. Each overhead carrier then shuttles each container to be loaded on to another ship, to a nearby container storage depot, to a nearby industrial area or to an intermodal terminal for transfer to railway or long-haul trucks.

The present overhead railway container transfer concept requires an intermediate vehicle to raise and lower each container to and from the overhead railway system, also to move each container sideways away from and directly under the system. Such operation would be feasible at ports that require large numbers of overhead carriers that rapidly move and transfer massive numbers of containers during short periods of time. A comparatively small number of transfer vehicles that move containers sideways and raise and lower containers would support a much larger fleet of overhead carriers.

Terminal operators would also have access to data connectivity such as Eagle-I, the company’s proprietary routing and scheduling software that is programmed to ensure that containers are shuttled efficiently. The system is designed to monitor container movement using IOT sensors that tracks and reports all data to the terminal operating system (TOS) and intermodal software to deliver end-to-end connectivity.

The most likely ports to consider EagleRail’s overhead transfer technology would be ports that have restricted terminal space and that need to rapidly transfer containers off and on one or more super-size container ships. At the present time, the largest container ship in service carries almost 24,000 TEUs. Within the next few years and courtesy of ongoing development at the Suez Canal to transit deeper-draft and slightly wider vessels, container ships of up to 35,000 TEUs could enter service on the East Asia – Western Europe service, with stops at major transshipment terminals.

Maximizing ship productivity requires that the ship spend minimal time berthed at quayside, requiring rapid simultaneous transfer of containers between and among ships of different sizes that have arrived from multiple points of origin and will sail to multiple destinations. Viable investment in the overhead transfer technology requires major terminals that each processes multiple ship loads of containers each day. Major ports with limited land space and serve an expanded region within 500 miles (800 kilometers) radius that include intermodal ship – railway and ship – truck transfer of containers would require more rapid transfer of increasing numbers of containers.

Within the next few years, the Suez Canal will be able to transit much larger container ships than the ships now entering service. The present generation of large ships already strains the ability of ports to quickly transfer large volumes of containers between ships, also from ships inland container depots for overland transport. EagleRail’s overhead rail container transfer technology offers ports the option of rapidly transferring increasing numbers of containers among transportation in terminals that are becoming pressed for space. 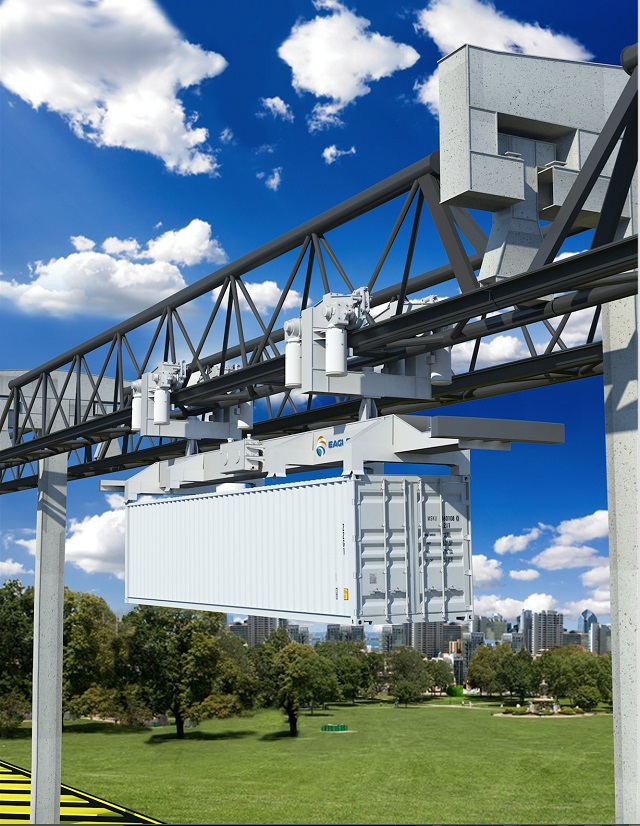