Commemorating USS Olympia and the Tomb of the Unknown Soldier

Last month, Congressman Robert Brady (D-Pennsylvania) introduced a resolution in the House of Representatives commemorating the 100th anniversary of the end of World War I and the creation of the Tomb of the Unknown Soldier. 116,516 Americans died in the war which ended on November 11, 1918, and another 200,00 were wounded.

Olympia transited up the river, exchanging salutes from Fort Washington and Mount Vernon, then reached the Washington Navy Yard. Today’s visitors associate the area with the Washington Nationals.  But baseball was not on the minds of Secretary of War John W. Weeks, Secretary of the Navy Edwin Denby, General of the Armies John J. Pershing, Admiral Robert E. Coontz, CNO, and Major General John A. Lejeune, Commandant of the Marine Corps when they greeted the USS Olympia and the unknown soldier. Instead, their thoughts were on the millions of men and women who perished in the “war to end all wars.” 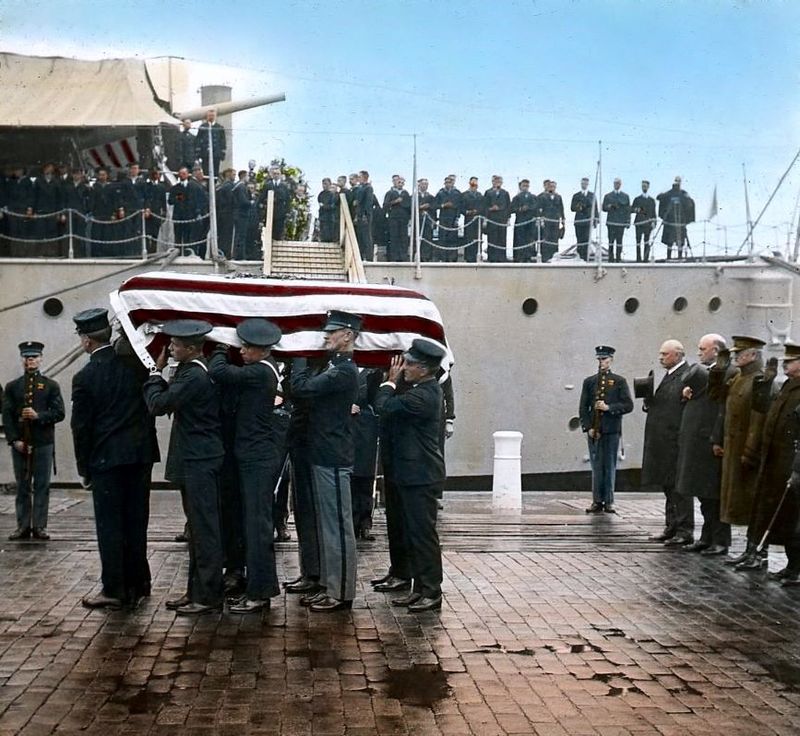 The USS Olympia fired a 21 gun salute before her most valuable passenger departed the ship and was placed in the protective custody of soldiers of the 3rd US Infantry Regiment. Soldiers from this regiment have stood guard, rain, sleet, or shine, over the unknown warrior for 100 years, and they’re never going to leave him.

This November, the USS Olympia will be hosting a ceremony in Philadelphia, Pennsylvania to commemorate veterans, and everyone is welcome to attend. The ship’s bell, like thousands across the country, will ring at 1100 hours and together, we’ll remember those who died at Flanders Fields, Gallipoli, Jutland, and Verdun.

Veterans Day ceremonies will also be hosted at Arlington Cemetery in Virginia.  If you attend the event, look closely at the grips of the pistols carried by the tomb guards. Wood from USS Olympia was recently inlaid into the grips of the handguns, further cementing the relationship between the ship, the tomb guards, and the unknown soldier.

The ship is a star, and I’m thrilled that Representative Brady’s resolution references her contribution to the creation of the Tomb of the Unknown Soldier. I’m very appreciative of Representative Brady’s recognition of the USS Olympia’s accomplishments. I’m also grateful for his recognition of the centennial of the Armistice. Over 100,000 Americans died in the conflict and I, along with everyone who works with the USS Olympia, want to say thank you to the families who lost loved ones.

John Brady is the president of the Board of Directors for the Flagship Olympia Foundation.