Celebrating 20 Years of Open LGBT Service in the Royal Navy

Sailors and Royal Marines around the UK have marked 20 years since the lifting of the ban on LGBT men and women serving in the armed forces.

Naval bases and Royal Marines units are flying rainbow flags from their main masts, sailors attended a House of Commons reception and Portsmouth’s Naval Base headquarters lit up in colours to mark the anniversary. Those who took part wanted to send a clear message – that the Naval Service welcomes all talent to its ranks, regardless of sexual orientation or gender identity.

Commander Sam Kinsey-Briggs is the co-chair of Compass, the sexual orientation and gender identity network of the Naval Service. “I was honoured to attend this special occasion. Celebrating 20 years since lifting the ban with fellow service personnel and our veterans, some who lost their careers, was humbling and inspiring," said Cdr Kinsey-Briggs, who attended the reception in Parliament. “It’s about celebrating the wider diversity agenda and contribution all our people make. It’s especially relevant for me as we celebrate 30 years of women at sea this year too.” 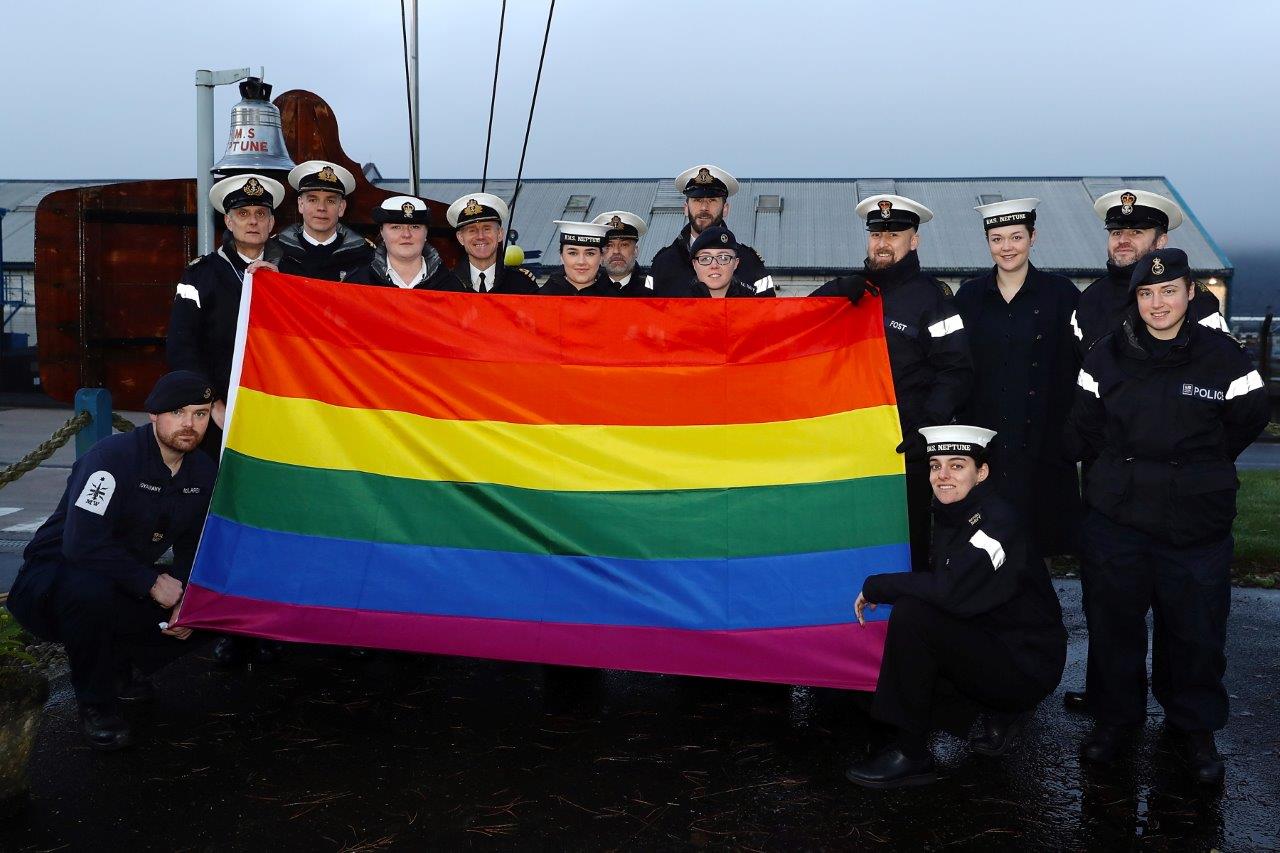 Lieutenant Aaron Wilding, who also attended the reception, joined the Royal Navy before the ban was lifted.

“Having joined the Navy before the ban was lifted, I have lived through the transition process and on a personal level I now feel so proud to feel liberated enough to be my true self," Lt. Wilding said. "I spent so many years holding back on who I was but now I feel that being allowed to be myself allows me to give my all. I joined the Royal Navy to serve my country and I have faith that I work for an organisation that stands for honesty, openness and integrity. In order to defend our nation, we need to be representative of what that is.”

Rainbow flags have been raised at key locations across the UK including the Royal Navy’s three main naval bases in Portsmouth, Devonport and Faslane. Fleet Air Arm personnel at RNAS Yeovilton and Royal Marines from 43 Commando in Faslane also flew the flag to mark the anniversary. In Portsmouth, the Naval Base Headquarters has been floodlit in rainbow colours all week and banners adorned lamp posts around the base.

“For a while now, generations of people joining the Royal Navy simply don’t rate sexuality as a quality of any more importance than eye colour," said Lieutenant Commander Jenny Dunford, from Portsmouth Naval Base. “I would highly recommend the armed forces to people of any sexuality and assure them they can be safe in the knowledge that hard work and the ability to bring your whole self to work is the key to reward and our overall operational capability.”

Organizations across the shipping industry continuing to respond to the EU Parliament’s moves to include intra-EU shipping within the EU Emissions Trading Scheme (ETS), the CO2 cap-and-trade system that covers other European industries. Last week the World Shipping Council that represents the container industry spoke out against the move and now INTERTANKO, the International Association of Independent Tanker Owners issued a similar statement saying the efforts might undermine global emission control programs. “INTERTANKO Members noted with great concern the European...