Behind the Scenes of "The Finest Hours"

Making The Finest Hours meant a lot of frigid temperatures, a lot of cold steel, but also a lot of heart, according to Jim Whitaker, the producer of the movie.

While the film, to be released January 29, captures a rescue story that is Coast Guard legend, Whitaker said it is a story that honors the humble humanity that is characteristic of members of the Coast Guard.

“What is most incredible to me is the incredible selfless nature of these men who woke up and said there is something that needs to be addressed,” Whitaker said. “It’s perilous, our lives will be in danger, and we need to do it; and in this particular story, not to make a fuss about it.”

In a sea of stories about military heroics, this was one that Whitaker couldn’t wait to tell.

“I think it’s just incredible,” he said. “The more I came to understand it, the more I kept saying to myself, ‘I can’t believe this happened; I can’t believe that happened. It just kept unfolding. And when you are lucky enough to come across a story where the facts are so incredible, you immediately seize on it.” 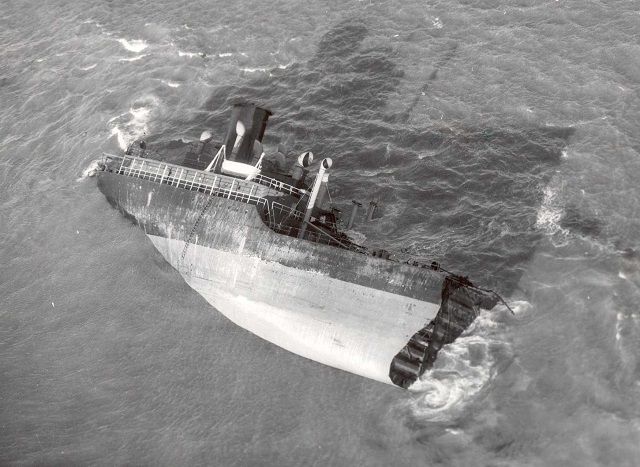 Survivors of the SS Pendleton had to climb down the Jacobs ladder draped across the stern to reach the rescue boat. Official USCG Photo; ELC 1CGD; photo by Richard C. Kelsey, Chatham, Mass.

Often called the greatest small-boat rescue in American history, it is the story of the dramatic rescue of members of the crew of the SS Pendleton. A Coast Guardsman and three volunteers from Chatham Lifeboat Station, now known as Coast Guard Station Chatham, forged into the midst of a Nor’easter in a 36-foot lifeboat to bring the stranded crewmen home.

As Petty Officer 1st Class Bernie Webber navigated the boat to the remains of the sinking ship, 32 survivors scrambled down the stern of the tanker on a Jacobs ladder and jumped into the lifeboat. One man was lost in the process. Webber’s impromptu crew included Andrew Fitzgerald, the station’s junior engineer; Seaman Richard Livesey; and Irving Maske, a seaman who had been waiting at the station for transportation back to Stonehorse Light Ship. All four were awarded the Gold Lifesaving Medal.

Whitaker said that those who made the film were aware of its value to the history of the Coast Guard, and they wanted to portray it as purely and accurately as possible. Getting to that point of accuracy meant filming at Station Chatham in the middle of winter.

“It was really important to us from the very beginning that we wanted to honor its truth,” Whitaker said. “We wanted to be in the place that is happened. So everyone felt this feeling of needing to be responsible caregivers, if you will, of the story itself. It added a tremendous amount to it.”

He said that normally, when filming, bad weather days mean scrambling to find somewhere else to film. In this case, as a nor’easter bore down on Chatham, they went right out into it. That was a perfect day for shooting, he said. 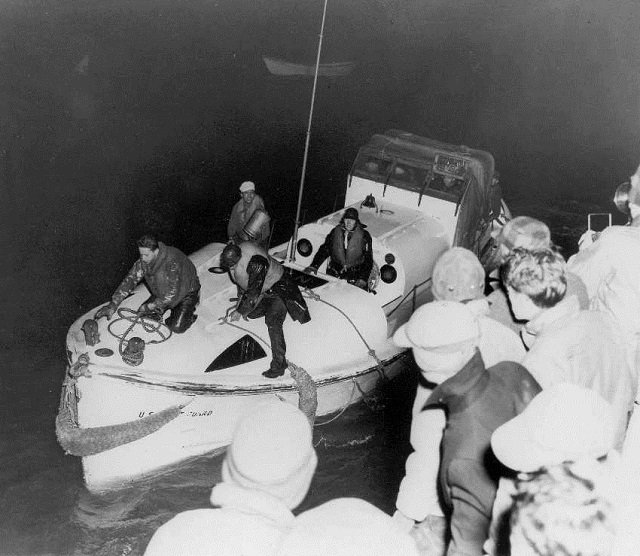 Additionally, to maintain accuracy, the crew worked with Cmdr. John Pruitt III and Chief Warrant Officer Paul Roszkowski of the Coast Guard’s Motion Picture and Television Office. They reviewed dialogue, made sure the uniforms were accurate, and watched scenes as they were filmed.

One of the most difficult aspects of filming, Whitaker said, was building the set for the engine room of the SS Pendleton. It required 850,000 pounds of steel to build in, then it needed to be filled with water. And then it needed to be safe. The actors were constantly wet during filming, he said, so they also needed a way to keep everyone warm in the midst of the cold water, cold steel, cold weather.

“It’s intentionally a very miserable environment,” Whitaker said of the acting conditions. “They had a great time.”

In fact, the effort went beyond location, atmosphere, and wardrobe Whitaker said. Chris Pine, who portrays Webber in the film, found old recordings of Webber speaking about the rescue. He studied them and took on Webber’s cadence and inflections.

“It was literally the way Bernie spoke,” Whitaker said. “We did everything we could to make it as authentic as possible.”

Webber’s 20-year career in the Coast Guard began in 1946. During that time, which included a tour in Vietnam, he rose to the rank of chief warrant officer. In honor of Webber’s bravery, the first of the Sentinel-Class cutters was commissioned the Bernard C. Webber. He died in 2009 at the age of 80. A portion of his ashes were buried in a family plot in Wellfleet, Massachusetts, and the rest were released in the waters of Chatham Harbor by the Coast Guard.

The movie is not only a way to capture a dramatic story of rescue. For Whitaker, the film also honors an important part of his upbringing. Whitaker grew up in the Washington, D.C., area until he was 12 years old. His family then moved to a small fishing village in Nova Scotia, Canada. Because the town relied on fishing for its livelihood, he understood the important of those who are the guardians of the sea. He said they often would hear of rescues in action on the radio, and the father of one of his closest friends was a fisherman.

As Whitaker prepares for the movie’s opening next week, he said he hopes that the members of the Coast Guard and their families who see it find that it is an accurate portrayal of the story and their values.

“We tried really hard to tell a story that I think captures the core values that I perceive to be the values of the Coast Guard: honor, duty and selfless, humble action. And I think that the film really captures that. It shows that in an authentic way, in its purity,” Whitaker said. “It’s really trying to capture the spirit by which I think the Coast Guard operates on a daily basis.”

The Finest Hours: Go here for more information about the movie, including video clips.

Pendleton Rescue: The Coast Guard’s links to information about the rescue.

Coast Guard photos: This is a treasure trove of photos about the event.

Books: This movie was based on The Finest Hours by Michael Tougias and Casey Sherman. Other books about the rescue are The Pendleton Disaster off Cape Cod by Theresa Barbo and Capt. W. Russell Webster (USCG Ret.), which has a forward by Adm. Thad Allen; and Two Tankers Down by Robert Frump. Webber wrote Chatham: The Lifeboatmen, which was published in 1985 by the Lower Cape Publishing Company.

Shelley Kimball has been married to Capt. Joe Kimball, chief of the office of aviation forces at Coast Guard headquarters, for 14 years. She currently serves on the board of directors for the Military Family Advisory Network.