It is a key site for migratory birds, welcoming more than two million waterbirds every winter. It is home to diverse marine animals, from amphibious mudskipper fish to endangered sea turtles. And, according to Unesco, it is a crucial “custodian” of the world’s blue carbon assets, meaning it hosts ecosystems with an exceptional ability to sequester carbon and help mitigate climate change.

Even as a natural reserve protected by a Mauritanian special law,  Banc d’Arguin can’t be spared from threats faced by the global ocean as a whole. Scientists have warned that sea-level rise, overfishing and oil and gas extraction are overshadowing its future.

The park has been a Unesco world heritage site since 1989 and a Ramsar Wetland of International Importance since 1982. It spans an area of 12,000km² and stretches along over 30% of the Mauritanian coast. 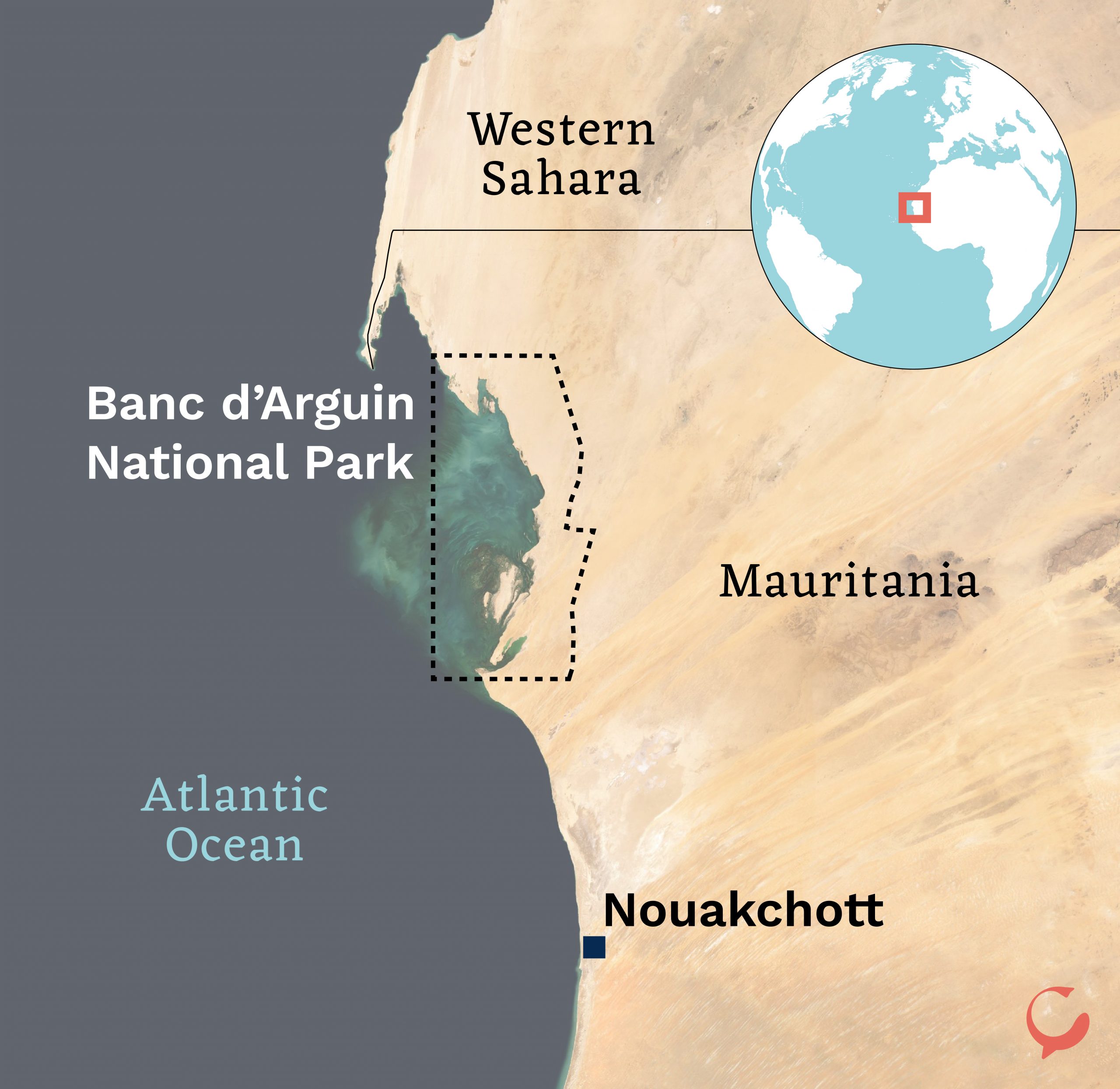 It is the meeting place of a dry, harsh desert and a vast blue ocean: to its east is the Sahara and to its west the North Atlantic. It boasts a mosaic of features from both environments, including windblown sand dunes and banks, coastal swamps, marshes and tidal mudflats.

El-Hacen Mohamed El-Hacen, a conservationist with the national park, says its uniqueness also lies in the shallowness of the waters.

Its submarine tidal bank – usually less than five metres deep and extending 80km from the shoreline – teems with life.

“There are only very few places that have shallow waters in the whole of West Africa,” he adds. “It provides services to biodiversity that no other places can.”

Endangered green sea turtles, as well as monk seals, bottlenose dolphins and Atlantic humpbacked dolphins, can also be sighted in the shallow waters of the park.

Another treasure of the park is plentiful at the bottom of these shallows: seagrasses.

Together with mangroves and salt marshes, seagrasses are recognised as “blue carbon sinks” because they can capture and store carbon, thereby helping to mitigate climate change.

In fact, scientists say these coastal ecosystems can sequester carbon more effectively than terrestrial forests. Seagrass, for instance, can lock carbon into the seabed 35 times faster than tropical rainforests. Although seagrass beds only occupy 0.2% of the sea floor, they account for 10% of the ocean’s capacity to sequester carbon.

“Banc d’Arguin plays one of the most important roles in carbon sequestration because of its seagrasses,” Mohamed El-Hacen says.

Scientists estimate that 772km² of the park’s surface is covered by seagrass. According to a Unesco report published last year, those seagrass beds hold 109 million tonnes of carbon. This is equivalent to the average emissions of 97 coal-fired power plants in one year, based on the US Environmental Protection Agency’s greenhouse gas equivalencies calculator. Unesco has ranked the park as the third-largest blue carbon sink among all the world heritage sites, below only the Everglades National Park and the Great Barrier Reef.

Yarba Ahmed Mahmoud notes that the park’s blue carbon value is even larger than Unesco’s estimation. He says the assessment only evaluated the carbon sequestration by seagrasses, overlooking the value of extensive bare mudflats. Also known as tidal flats, the carbon sequestration potential of these ecologies is increasingly being studied and recognised.

The park has one of the most concentrated populations of marine mammals in West Africa. These animals can contribute to carbon sequestration too, Yarba Ahmed Mahmoud says.

Recent research shows that large marine mammals capture and store carbon in their enormous bodies over their lifetime. When they die, this carbon then sinks with their carcasses to the bottom of the ocean, where it may remain for centuries. In this way, an adult whale sequesters an average of 33 tonnes of carbon dioxide, the IMF estimates.

A park under threat

Banc d’Arguin’s flourishing ecosystems and abundant natural resources have caught the attention of industrial fishing fleets and oil and gas companies. Their operations in the region are putting pressure on the park.

The IUCN rated the park’s conservation outlook as a “significant concern” in 2020, stating its value was deteriorating due to threats, including overfishing, oil and gas exploration, and climate change.

“Some threats are coming from the outside,” Yarba Ahmed Mahmoud says. “There are a lot of motorised boats that fish in the vicinity. And they all want to go inside the park. So, there is a lot of pressure.”

The Imraguen people, most of whom live within Banc d’Arguin where there is a population of roughly 1,000, are the only ones permitted to fish in the protected area using traditional, sustainable methods. But the IUCN’s 2020 assessment said that in recent years, an increase in international fishing fleets operating in waters close to the park has added pressure on its marine ecosystem and reduced the catch of Imraguen communities.

Inside the park, artisanal fishing has become increasingly commercialised, with Imraguen fishers increasing their catches and targeting lucrative species such as sharks and rays.

In 2003, the park authorities reached an agreement with the Imraguen to halt the targeted fishing of sharks and rays and stop the use of nets designed for these species.

But Yarba Ahmed Mahmoud says that the park has yet to successfully avert illegal fishing within its jurisdiction due to the demands for these species from African and Asian markets.

The risk of a potential oil spill has also caused unease among conservationists.

Oil and gas exploration and exploitation are banned within the park and a 5km buffer zone around it. However, the Mauritanian government has granted concessions near the park, and offshore exploitation has been going on in the country since 2006.

“Suddenly, the park was in the middle of these gas extractions,” Yarba Ahmed Mahmoud says. “There are Shell, Total and Capricorn. All these companies are now in the area. They are not in the park but not far away, trying to extract gas.”

Apart from increasing the risk of an oil spill accident, the expansion of oil and gas extraction also creates noise pollution that can potentially harm marine mammals, according to the IUCN report.

The threat of sea-level rise due to climate change is not far from its doorstep either. The rising seawater has already gained ground and changed the park’s coastline. A study in 2021, co-authored by Mohamed El-Hacen, estimated that 83% of the park’s “populated coastline” is exposed to “a moderate to high risk of flooding and erosion”, and local fishing villages might face the possibility of displacement in the wake of hazards such as storms.

Mohamed El-Hacen says the park provides so many irreplaceable services to the natural world that it cannot be left alone to tackle these challenges, especially the cross-regional issues of climate change and illegal trade of sharks and rays.

“The pressure is high. The stakes [are] high,” says Mohamed El-Hacen. “For the park to fulfil its roles, it [will] take a lot of international cooperation to mitigate and prevent the place from being lost.”

Regina Lam is an editorial assistant at China Dialogue Ocean. She is also a freelance journalist based in London. Li Yedan also contributed to the story research.