I recently sailed onboard the landing helicopter dock and Royal Australian Navy flagship HMAS Canberra from Vietnam to Singapore, as one of several academic sea-riders invited to observe Indo-Pacific Endeavour 2019 (IPE 19), which has now concluded after three months at sea.

A key question about this operation was what did the People’s Liberation Army Navy make of so much Australian activity in waters that China claims? Sailors tend to have a healthy professional regard for each other. The good news is that interactions between the RAN and PLAN remain cordial.

But we were followed at a discreet distance by a Chinese warship for most of the transit, both on the way up and back, despite the fact that our route didn’t take us near any feature occupied by Chinese forces, or any obviously sensitive areas. Bridge-to-bridge radio communications, I was told, while courteous, included requests for Australian warships to notify the Chinese in advance of any corrections to their course—something the RAN was not about to concede while exercising its high-seas freedoms.

The presence of our ‘trailing escort’—HMAS Parramatta apparently received similar attention from the PLAN—had no obvious effect on HMAS Canberra’s activities, including maintaining a brisk pace of flight operations. The army’s Tiger attack helicopters practised night flying and deck landings, as they start to develop a maritime role.

Some helicopter pilots had lasers pointed at them from passing fishing vessels, temporarily grounding them for precautionary medical reasons. Was this startled fishermen reacting to the unexpected? Or was it the sort of coordinated harassment more suggestive of China’s maritime militia? It’s hard to say for sure, but similar incidents have occurred in the western Pacific.

Since its first outing in 2017, IPE has become established as Australia’s roving vehicle for regional defence engagement, though it more closely resembles a set of separate port-based engagements than a rolling exercise at sea. The aim is to shape Australia’s strategic environment, with a heavy emphasis on defence diplomacy, to strengthen relations. Although delivered by a naval task group, the joint aspect of IPE 19 was emphasised by the fact that it was led by an air commodore.

Although IPE 19 was primarily focused on South Asia, for me this was an opportunity to experience a naval transit of the South China Sea (SCS), in the hope of demystifying that most commented-upon body of water. I’m grateful to the RAN for making that possible. While the transparency and openness I experienced onboard was impressive, the SCS remains something of an enigma. 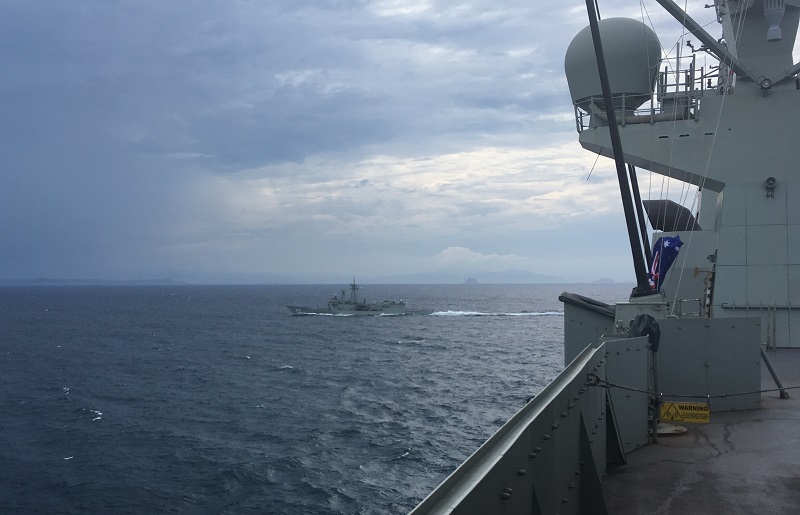 The fact that IPE 19 incorporated a spur into the SCS is itself significant. Australia was literally going out of its way to include Vietnam in the activity.

The ADF’s military-to-military engagement with Vietnam was less evolved than with more familiar partners along the IPE route—but more interesting for being unfamiliar. One of Vietnam’s six Kilo-class submarines based at Cam Ranh Bay was conspicuously on hand to witness our departure. We then conducted a passage exercise with two Gepard-class frigates, the Vietnam People’s Navy’s largest warships. The Vietnamese went out of their way to engage in broader respects, including a rock-star welcome to ADF personnel on a school visit (many onboard ranked this as their personal highlight of IPE 19).

In addition, a small contingent of US Marines based in Darwin had embarked in Thailand. My first significant moment of IPE 19 came in Nha Trang (a popular recreation spot for US servicemen during the Vietnam War), where I witnessed probably the first US Marines, out of uniform but on active duty, to walk along that beachfront in nearly 50 years. Historical value aside, this was surely a significant defence diplomacy ‘effect’, sharpened by the fact that it was delivered, benignly, from an Australian amphibious assault ship.

It also says something that the US Marines were welcomed in Vietnam but didn’t go ashore in either Malaysia or Indonesia. Sensitivities—not only on the hosts’ part—can hopefully be salved so that the marines can in future interact with more regional partners, under an IPE aegis. It will take time for all concerned to become accustomed to US forces ‘plugging in’ to an Australian operational and diplomatic lead. But this kind of role reversal is in the long-term interests of the alliance, as Canberra steps up strategic engagement in the region.

My short time embedded with the RAN also made me reflect on how an inordinate academic and media focus on freedom-of-navigation operations, something I’ve contributed to, has distracted from more fundamental questions about Australia’s naval presence and willingness to operate in the SCS.

For a modest-sized navy, the RAN has been remarkably active across the SCS. HMASCanberra transited from Cam Ranh to Singapore, accompanied by HMAS Newcastle (its final voyage before decommissioning). Meanwhile, HMAS Success (also about to be paid off) was participating in multinational ASEAN Defence Ministers Meeting (ADMM)-Plus exercises to the south. On our way to Singapore, we crossed paths with the Anzac-class frigate HMAS Parramatta, which was headed on a northeasterly track. HMAS Melbournehad passed through the SCS and Taiwan Strait only a few weeks earlier, on its way up to Qingdao and points east.

The ubiquity of PLAN vessels shadowing other warships in the SCS suggests that China’s surface force has grown big enough to be able to ‘close mark’ at will. Our transit coincided with multinational naval activity elsewhere in the South China Sea, including a US FONOPclose to Scarborough Shoal. The PLAN was simultaneously participating in ADMM-Plus exercises to the south, alongside HMAS Success.

The fact that Chinese warships are shadowing their marks for longer distances suggests that the PLA’s over-the-horizon surveillance capability is also maturing. The large facility at Fiery Cross Reef sits at a prime gatekeeper location in the Spratly Islands, from which PLAN ships on ‘picket’ stations can be sent to intercept other vessels.

Although IPE embodies non-warlike missions, including humanitarian assistance and disaster relief, our transit through the most hotly contested body of water in the Indo-Pacific brought home the contrast between a naval task group operating under peacetime conditions, scattering and then reforming, and the more challenging scenario of sailing a naval task force into harm’s way, in a decreasingly permissive environment like the SCS.

Australia’s navy has gamely demonstrated its willingness to remain present in the SCS, operating in several locations at once. China has equally underlined that it can detect foreign warships and has the capacity to deploy screening forces across the SCS. That’s a sobering development.

If Australia continues to operate in the SCS in the long term, as I hope it will, its ability to do so will depend increasingly on the support of its allies and partners. This is not a job to do alone. IPE represents a head start on developing the defence and security partnerships that Australia needs to invest in for a less benign future.

This editorial appears courtesy of ASPI's The Strategist blog, and it may be found in its original form here.