During the mid-1940’s, an innovation called the “free-wing” was developed in the U.S. to improve flight stability of small aircraft. A flap mounted at the end of a long lever that extended rearward behind the wing, maintained wing angle during flight. The free-wing concept may be adapted to sailing vessels propelled by an aeronautical-style airfoil-sail or wing-sail in place of a more traditional fabric sail.

Using traditional sails to propel a boat requires that each crew member be highly skilled in rapidly re-adjusting sails in response to changing wind conditions and to changes in ship sailing direction. Adding wind-driven propulsion to modern ships offers potential reductions in fuel costs and lower ship exhaust emissions. Modern wind-driven ship propulsion needs to deliver high propulsive effort and be easy to operate, perhaps even dispensing with the ropes used to re-adjust angles of ship sails. The requirement calls for a different design of sail controlled by a different operating system.

Using wind energy to maintain and adjust the angle of a wing-sail relative to ship’s hull reduces need for ropes and cables. Resetting the angle of wing-sail relative to hull requires use of large and powerful electric motors to drive large worm gear mechanisms to reset wing-sail angle. Using a smaller downstream wing-sail(s) mounted to an extended length lever to adjust the angle between hull and the large upstream propulsion wing-sail would require smaller electric (or hydraulic) motors driving smaller worm gear mechanisms. Re-adjustment of hull/wing-sail angle would require less energy.

Ships designed to carry different types of cargo would require different types of sails. A container ship requires maximum available deck space to carry payload, leaving bow-area installed and retractable kite-sails as a possible option to assist propulsion along sections of the voyage that are parallel to prevailing trade winds. Due to the nature of the payload that has to be carried below the deck, bulk carrier ships may use the combination of retractable bow-area installed kite-sails as well as deck mounted masts for sail technology or for vertical-axis wind turbines such as Magnus rotors driving electric generators. 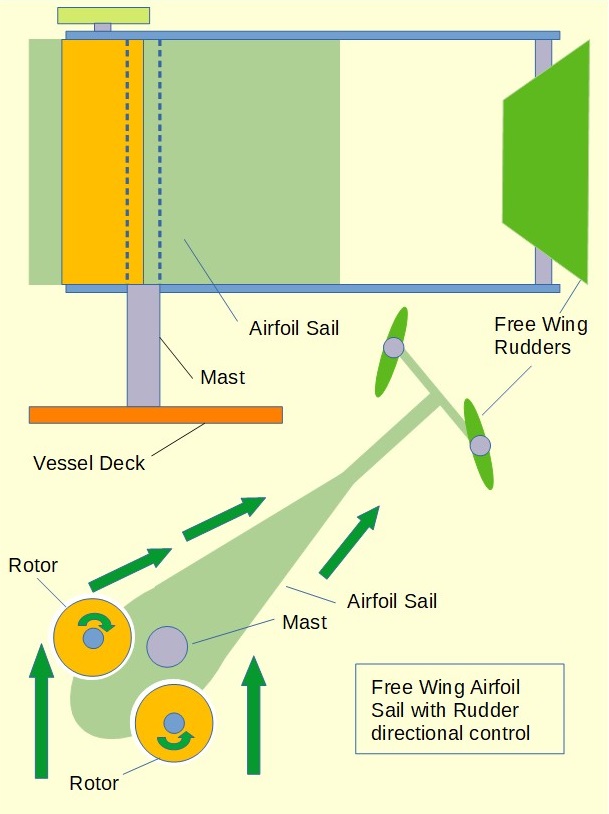 The option to install wind-sails to masts that extend skyward from the deck can also allow for a hybrid wind-sail configuration. On an airplane accelerating along a runway, topside wing profile allows air to simultaneously accelerate to higher speed while reducing topside air pressure to well below surrounding area atmospheric pressure. The difference between higher underside and lower topside dynamic air pressure produces lift. Likewise with a wing-sail installed above the deck of a sail powered vessel, the difference between higher upstream side and lower shadow side dynamic air pressure generates propulsion.

Airplane wings will only develop lift under certain flight conditions and at certain flight speeds, otherwise the wing stalls with an increase in wing topside dynamic air pressure. Likewise, depending on wing-foil design and angle, the shadow side of the wing-sail can also undergo stall. Due to flexibility in wing-foil weight on a ship’s deck, it becomes possible to incorporate a pair of vertical-axis, counter-rotating rotors near the leading edge. One the wing-sail downwind or shadow side, the rotor’s boundary layer effect would direct rapid flow of air into that area and maintain extremely low dynamic air pressure.

Designing wing-sails to include spinning rotors at the leading edge allows each rotor’s boundary-layer effect to redirect the wind-stream through a severe angle. It is possible to install small vertical-axle wind turbine above each rotor to initiate rotation, subsequent to which wind induced boundary layer effect would sustain rotor spin. A twin rotor system can allow for extreme width at the wing-sail leading edge, placing its shadow or downstream side at such an extreme angle, that only spinning rotors could produce the necessary boundary layer contact and extreme low dynamic air pressure on the shadow side.

The wing-sail wide leading edge combined with larger diameter rotors would allow for installation of extreme diameter main masts capable of withstanding extreme wind-induced dynamic shear loading. Such installations would be compatible for freight ships that require a high level of propulsive force and comparatively low sailing speeds, compared to smaller passenger and recreational sail-powered vessels that would sail at higher speeds. For high-speed wind-powered sailing, a narrower leading edge with small diameter rotors would allow for a different wing-sail optimal angle to produce the required propulsive force at higher sailing speed.

Here is a video showing how a free-wing sail can propel a "blow-kart" along a beach:

There are several potentially suitable channels located internationally where further evaluation is required. Off the coast of the U.K., candidate narrow and shallow channels occur at the Outer Hebrides Islands, Orkney Islands, Shetland Islands, Scilly Islands and Faroe Islands. A few narrow and shallow channels occur between the Philippine Islands where current may be sufficient to sustain kinetic ferry service. At the south end of South American, ocean current sustains fast flowing water between nearby islands where kinetic ferry service may be considered. In the Caribbean, the channel between St. Kitts and Nevis would be a possible candidate.

While the idea of the free wing had its origins in the aircraft industry, the free wing concept has potential to be adapted to maritime sails, using airfoil wing-sails in place of traditional fabric sails. The concept may even be applicable to wing-sails that incorporate counter rotating cylinders installed just behind the leading edge. It would have application above water on the decks of wind powered ships, also below the hull to propel water current driven kinetic ferries. Modern wind powered ships would sail with a variety of wind technologies that will include the airborne kite sail for sailing parallel to trade winds.