It’s been said that the best way to understand world history and culture is to look at the maritime history of the world. Since water covers much of the earth, most of the interaction and trade (and conflict) among peoples shows up in their maritime activity.

We were in Aberdeen, Scotland, recently on an offshore asset valuation project and had free time to visit the Aberdeen Maritime Museum, a highly recommended way to spend a few pedagogical hours on maritime history.

Aberdeen historically has been known for its fishing as it sits on the North Sea and has easy access to plentiful stocks of fish from salmon and cod to haddock and mackerel. A seafaring culture has permeated the region for centuries – from women helping bait the nets to the establishment of the Aberdeen Shipmaster Society in 1598 for compensation to seafarers and fishermen lost at sea.

There have been several shipbuilders based in Aberdeen, mostly active with building fishing trawlers, everything from sailing fishing vessels (drifters) to colliers and eventually to steam-engine vessels. But don’t think that’s all Aberdeen shipbuilders could build!

The clipper vessel Thermopylae was built by Walter Hood & Co. in Aberdeen. She recorded the fastest crossing ever by a sailing ship from London to Australia – just 59 days – and outpaced the famous Cutty Sark by seven whole days on the passage from Shanghai to London during the China tea races in 1872.

The raked bow of ships (originally called the “Aberdeen bow”) was invented in Aberdeen by Alexander Hall & Co. in 1839 when tank models of ships with raked bows were creating smoother waves around the hull. And as early as 1682 the Harbour Act called for a Church collection throughout Scotland for buildings and repairs to the port of Aberdeen – in other words, ordinary citizens making volunteer contributions for a public work effort.

The port itself dates back to 1136 when it was referred to by Royal Charter. All in all, a very long and distinguished maritime tradition for the people of Aberdeen in modern history.

But for a modern traveler to Aberdeen today, don’t expect to see any fishing boats in the main port, whether sophisticated modern trawlers or old-fashioned wooden boats.

But be prepared to see lots of ships one does not ordinarily see in trading ports: All types of offshore vessels, most of them highly sophisticated, ranging from construction vessels to dive support vessels to jack-up rigs to every vintage and make of platform supply vessels (PSVs), offshore supply vessels (OSVs), multipurpose offshore service vessels (MSVs) and anchor handling tug supply vessels (AHTSs).

Ever since the discovery of massive oil deposits in the North Sea in 1969, Aberdeen has seen its fortunes change, not by just being passive or lucky but by actively pursuing the burgeoning offshore market.

It relocated the fishing village and docks from the Torry area of the port at the mouth of the River Dee to outside the port. It invested heavily in new infrastructure for the port, dredging it to accommodate offshore vessels and refocusing its traditional shipping expertise to build a cluster for the offshore business.

It’s been a down market for offshore drilling for almost a decade now, and any local shopkeeper who cares to talk to a visitor regales you with stories of the good times of the last decade when shops were just too busy. Even in this weak market, we counted 20-30 offshore ships calling the port every day, and on AIS we counted another twenty offshore assets anchored and idling several miles out in the open waters to save on costs.

Besides a deeper port with strong infrastructure, the cluster of technology companies (these offshore assets are actually more technology-laden than their bigger brethren) established to service the market include remote operating vessel (ROV) suppliers and manufacturers of remotely operated small bulldozers to dig on the seabed. With offshore wind power taking off, small bulldozers come in handy when preparing the seabed for the installation of platforms. 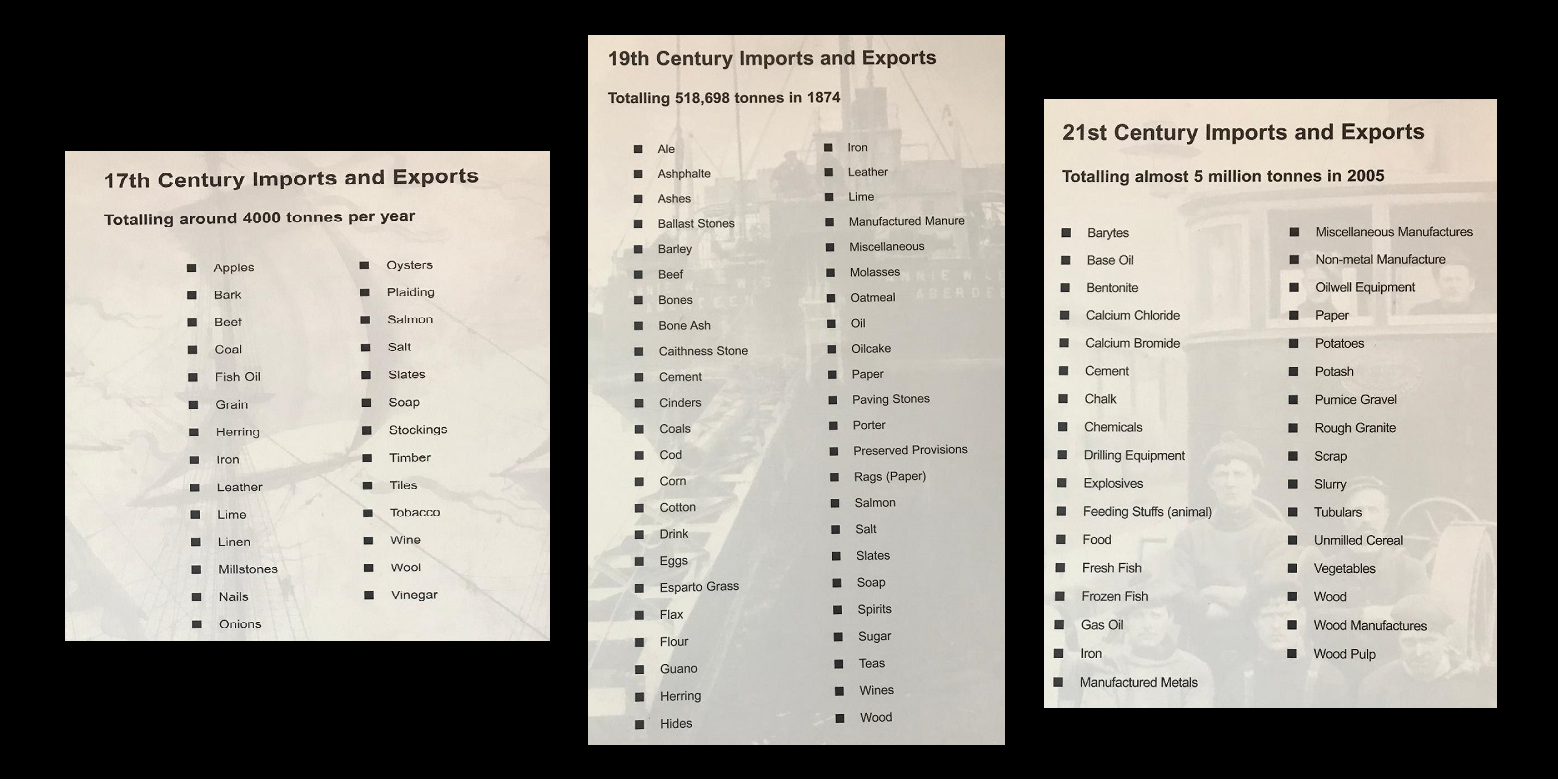 The three pictures above were taken at the Aberdeen Maritime Museum and are indicative of a changing world in Aberdeen and Scotland. From just 4,000 tons annually of trading cargo for mostly an agrarian/pre-industrial society in the 17th century, the volumes have ballooned to five million tons in 2005. Most of the cargoes of modern-day trade don’t seem to have anything to do with “real life” – barytes, bentonite, calcium bromide, slurry. Huh? For the uninitiated, you have to look such cargoes up in a marine engineering dictionary.

Changing with the Times

I suppose we’ll never see any shore-to-ship containership cranes overwhelming the port of Aberdeen any time soon since they wouldn’t provide any competitive advantage. On the other hand, this brief historical survey shows how a local shipping community, and broadly all of Scotland, has evolved its long seafaring tradition toward new businesses and trades.

And quite frankly – extrapolating a little – the developments in the port of Aberdeen and the strength of the energy business give Scotland a much more international orientation than otherwise and help support the remote possibility that it may hold a referendum to secede in the event of Brexit. After all, the Scottish economy is self-sustaining and, by its nature, international. Most of the offshore vessels we saw were primarily of Norwegian or other North European origin with lots of foreign oil companies and international service providers having offices in Aberdeen.

And again, just to show the foresight of the people and the port, even today there is still more diversification away from oil as the biggest offshore wind farm in the world (until recently) is located just south of Aberdeen, and last month there was a major announcement of more wind farm building in Scotland. The fossil fuel business has been great, but one always needs to keep their economy diversified and make genuine efforts to keep the seas and environment clean!

From fishing boats to building clipper ships to the invention of the raked bow to grabbing a commanding share of the offshore and drilling markets, and now to wind power and renewables, it’s been a really long journey for the Port of Aberdeen.

As we said, maritime history is the best way to learn history!

Basil M. Karatzas is the CEO of Karatzas Marine Advisors & Co., a shipping finance advisory and ship-brokerage firm based in the New York City. Basil has more than fifteen years of shipping market expertise, holds an MBA in International Business and Finance from Rice University in Houston, Texas, and has graduated from the Owner / President Program at Harvard Business School.