[In Part 1 of this series, we covered five of the most common ways to rig a pilot ladder improperly. In Part 2, we explore some of the more complex ways of arranging a ladder - and the right way to rig one safely.]

Another name often used for this platform is the “trapdoor system." The problem with it is that the more complex the arrangement, the more the risk of non-compliance.

In over 10 years of pilotage, I have come across the most astonishing fantasies of construction, but I have never seen a compliant embarkation platform setup.

There are a lot of reasons why someone climbing this setup could fall back down into the water or onto the pilot boat. It happens every year, with severe injuries or worse. It’s inconvenient, slippery and dangerous. 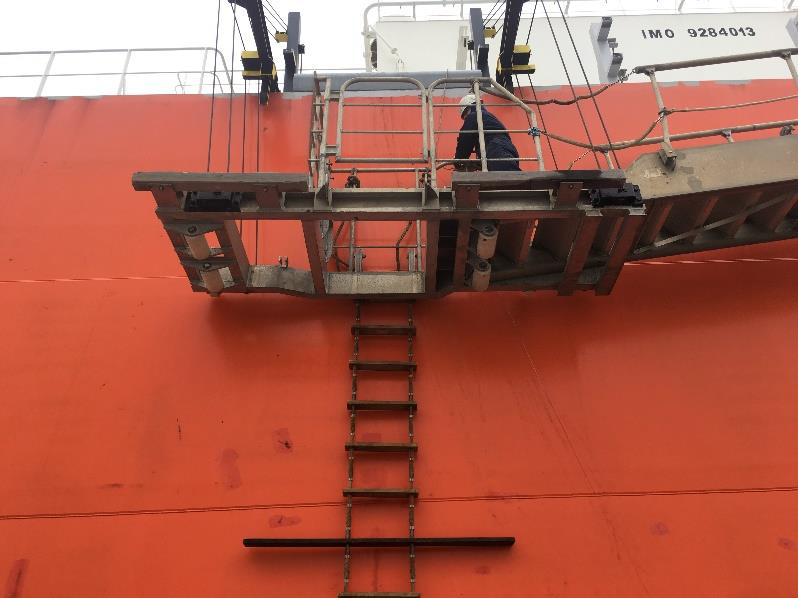 Let’s go to the “rulebook” to see what’s wrong with this setup. IMO A.1045(27) 3.7 is the most important one in this case. It tells us the ladder has to “extend above the lower platform to the height of the handrail and remain in alignment with and against the ship’s side."

More often than not the platform has to be adjusted in height to make a safe approach of the pilot boat possible. This always happens in a jiffy, which means the winch is not mechanically secured and the system is not secured to the ship's hull. All that is keeping the pilot on the ladder alive are the steel wires.

The ladder is attached under the platform, and we know now that this is not correct. Whenever you reach the top of the ladder, you have to lean back, grab some pieces of steel and drag yourself through the gap (750x750mm) in the platform. During rain this system works as a nice shower as well: water collected on the platform and gangway will find its way down throught the gap.

So the ladder has to run through the platform, must be secured to the already mentioned strongpoints, and had to rest firmly against the ship’s hull as well - all not the case here. 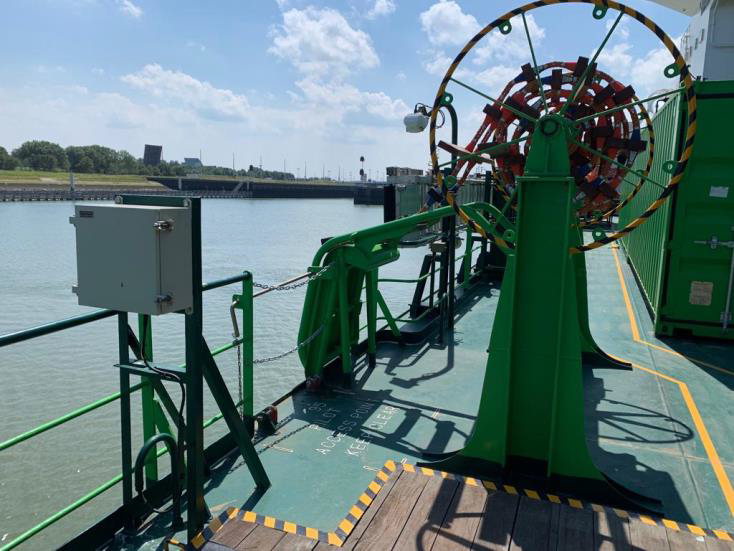 First, the IMO "rulebook” as we review this arrangement:

7.1.1 Postion of the winch must provide unobstructed access to the ship. Here we see it’s not the case: if you keep climbing you’ll end up on top of the winch.
7.1.2 Point of access may be a ship’s side opening, accomodation ladder or a single section of pilot ladder. In this setup you have to step sideways to the deck, and we have previously seen this is not allowed. What if, due to the freeboard, a spreader is obstructing your unobstructed access?
7.1.3 The access position and area should be clear of obstructions. Therefore the winch has to be placed basically out of your way.
7.4.2: the pilot ladder should be secured to a strongpoint independent of the pilot ladder winch reel, and
7.4.3: the ladder should be secured at deck level inside the ship’s opening or, when located on the ship’s upper deck, at a distance of not less then 915mm horizontally from the ship’s side inwards. 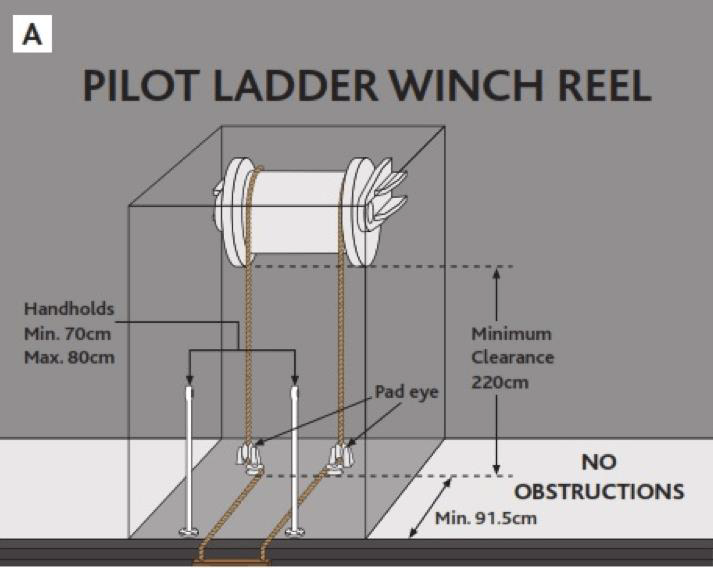 Above we see a part of the well-known pilot ladder poster. It makes the rule (7.4.3) clear. Suppose the ladder is secured to the deck at the opening? This is a risk for someone climbing: when he reaches in, he can grab hold of a part of the ladder on the other side of the securing arrangement and fall down. It has happened to one of my colleagues, and he wasn’t able to work for over six months; he has gained a few kilos in weight with all the nuts and bolts keeping his foot together.

Also the system must be secured in more ways than with other setups: the ladder is secured to strongpoints, the winch is on the brake and (7.5.6) a mechanical device or locking pin should also be utilized to lock powered winch reels. 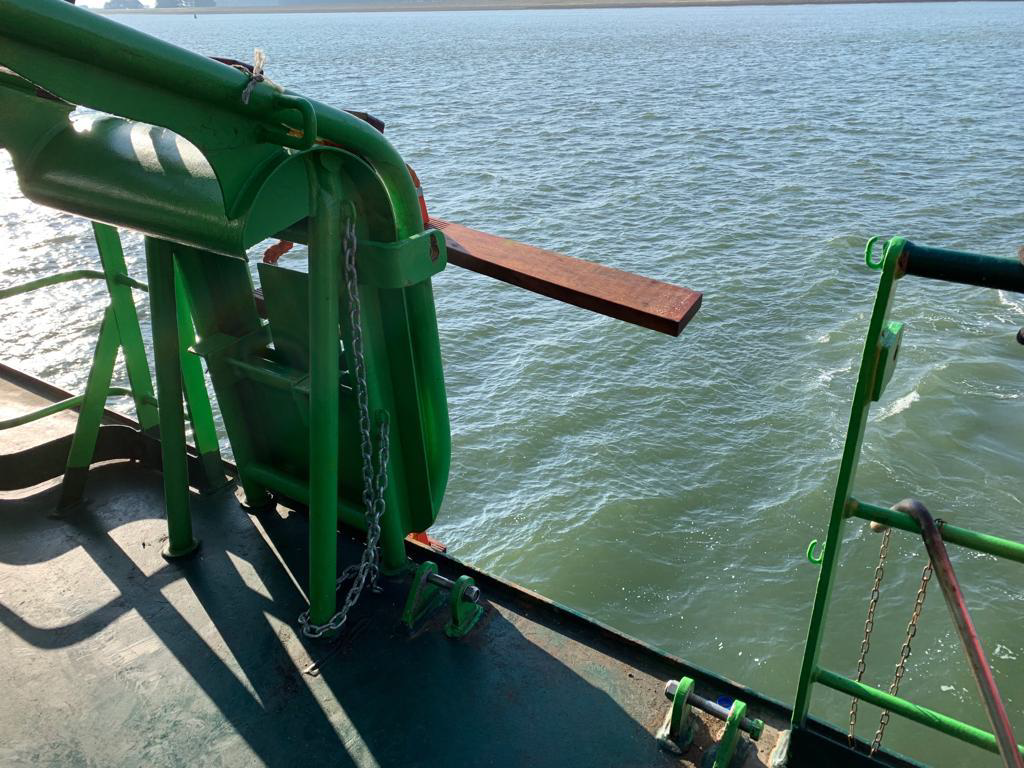 In this final picture in this section we can clearly see the spreader is obstructing your safe access to the ship, and again you have to stumble side ways. 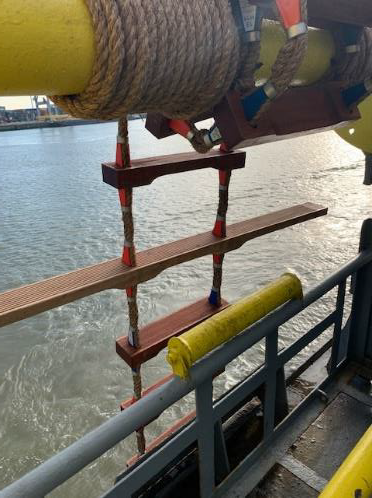 8. Shackles: Why and why not 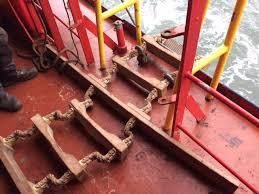 In the photo at left we see that shackles have been used often to keep the ladder in place. The photo shows what effect the steel shackles have on the manila ropes: twisted and beaten up. Will the ladder pass the 30-month compulsory strength test (ISO799-1/2019 10.4) for ISO-certified ships?

Shackles are an easy way for the crew to keep a ladder in place, but is it actually securing the sideropes?  No, it’s not - when weight is put on the ladder, the ladder will move freely under the shackles until the next set of chocks and next step have reached the shackles. The ladder will be held in place solely by step and chocks. We have previously seen that each side rope can handle 2,400 kilos and that a step can handle 880 kilos.

So we see that the shackles ruin the sideropes and that the force is put on the steps and not the sideropes. Why still use this setup? Because IMO allows it: IMO A.1045(27): 2.1.1 the securing strong points, shackles, and securing ropes should be at least as strong as the sideropes specified, etc.

This sentence is the only permission in the IMO regulations for using shackles over ropes, with the result we have seen in the photo.

Considerable stress on the chocks and steps

The correct way of rigging a ladder

After all the don't-do methods, finally the right method. What is the best way to secure the ladder to strongpoints on deck? 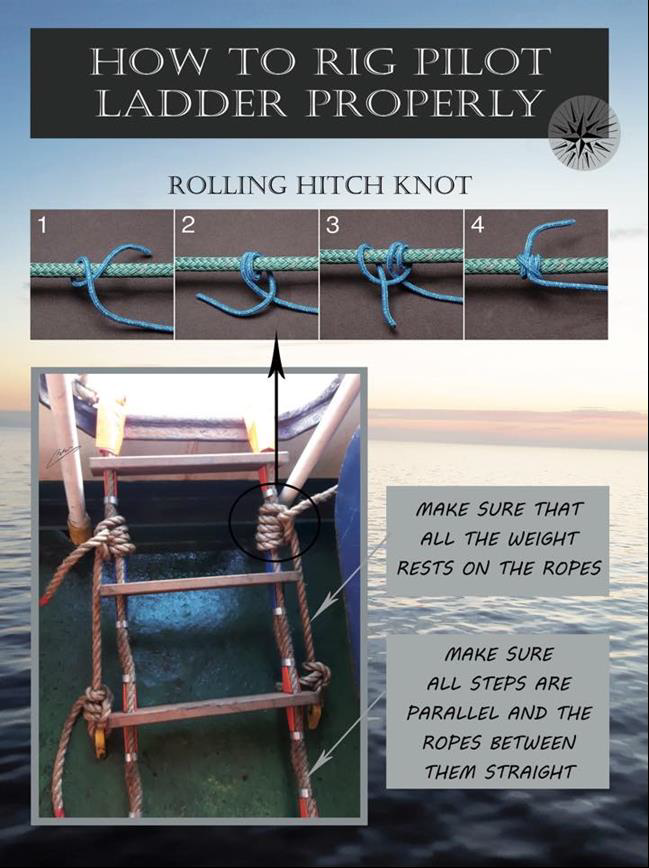 This is it - nothing to it, simple and safe!

We saw in the previous section that the securing ropes must at least have the same strength as the sideropes, and that makes sense. The better ladder manufacturers supply securing ropes with every ladder they provide. Use these ropes. Don’t use some random piece of rope you found in the bosun’s locker.

I hope you have enjoyed reading this article and maybe you’ve seen some practices used on your own ship. Don’t hesitate to step forward and change it to a compliant system.

You want to be safe, and so does the pilot boarding your vessel. People regularly get hurt or die when they climb a non-compliant ladder.

There are of course more non-compliant ways to secure a pilot ladder - brackets, steel wires, and more. We will explore these in the next installment in this series.

Arie Palmers is a registered pilot in the Scheldemonden region of the Netherlands.