Evacuator, the world’s first fire-proof emergency descent system, is designed to evacuate people in time-critical emergency situations at altitudes of 6m to 300m. It can be fire-proofed to 1750°C for 30 minutes.

The innovative evacuation system is fully mechanical and does not require electricity or any other power to operate, guaranteeing its operational reliability in all circumstances. The descent is fully automatic at a controlled speed of one meter per second. It is designed for use on all high-rise structures, including wind turbines, offshore substations, harbor cranes and other structures that previously relied on rope-based rescue descent devices, or in some cases had no emergency evacuation options open to them at all.

Ross Johnston, Head of Sales at Survitec, said: “The Evacuator is a world-class innovation in emergency response planning, simplifying evacuation in a panic situation. It is ideal for installation on a variety of structures, including offshore wind turbines, high-rise offices, remote structures and cranes. The system has already been very well-received by operators looking to upgrade their existing turbines.”

Eugene Verstegen, Evacuator inventor and co-owner of Netherlands-based Evacuator WorldWide BV, said: “Interest in the Evacuator has been growing significantly day-by-day. Demand is now on a global scale.”

The emergency descent system is installed using four or six bolts that connect it to a solid surface. It is very easy to use with a ‘click on and go’ mechanism.  Each steel cable allows for multiple people to descend at once, providing their combined weight does not exceed 282kg.

The Evacuator is available in three off-the-shelf models. Selection is based on structure height at 50m, 140m and 300m.  Survitec’s project team is also on hand to support bespoke design for new build and retrofit projects. A full suite of personal protective equipment (PPE) can be included in an Evacuation Chest alongside the Evacuator device to simplify and complete a safe escape.

With a lifespan of more than 30 years, Evacuator only requires an annual inspection, which can be carried out by the owner after training using a single tool.

Visitors to Wind Europe will be able to meet Eugene Verstegen and learn more about the Evacuator during a “Meet the Inventor” forum on the Survitec booth 3-B4 at 3pm on Wednesday, April 3. 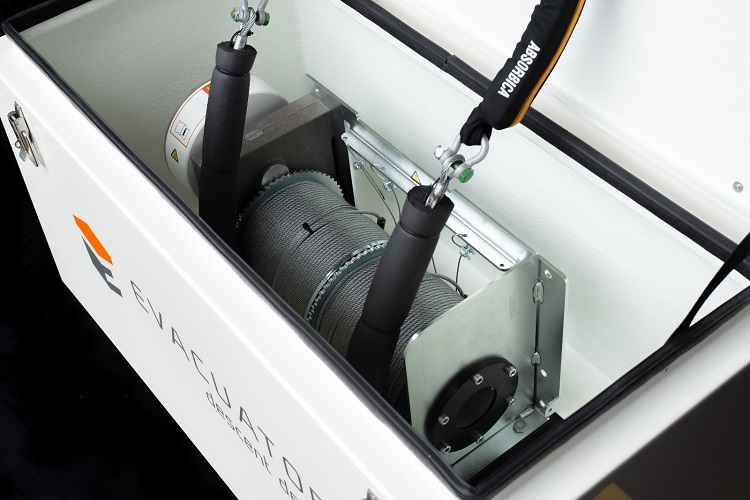