The shipping industry is currently adapting to a number of major challenges related to reducing greenhouse gas emissions and moving towards decarbonisation. The International Maritime Organization (IMO) has outlined an ambitious greenhouse gas (GHG) reduction strategy and the European Union (EU) has also unveiled its own plan to reduce shipping related GHG emissions. Consequently there is an emerging shift away from heavy fuel oils and the recent grounding of the MV Wakashio is likely to reinforce this trend.

Renewable energy is a source of emissions free power and on-board ships it can be harnessed by various means including rigid sails and solar panels. At the moment though, neither of these options have gained widespread acceptance in the shipping sector with just a few initial projects completed and others in the planning stages. However both have the potential to significantly reduce vessel emissions especially as the underlying technologies continue to be improved.

Past Use of Rigid Sails on Ships

Sails have been used by vessels of all types for thousands of years but with the advent of steam engines their use on ships carrying world trade gradually declined from the 1800’s. In the 1980's though, several Japanese ships were fitted with rigid sails with the aim of reducing fuel consumption. This was largely driven by the oil crisis in the 1970's which resulted in oil shortages and prices soaring. During this time ships fitted with rigid sails including the Shin Aitoku Maru and Usuki Pioneer proved that these devices were an effective source of supplementary propulsion. Various reports suggest fuel consumption was reduced through the use of these sails by approximately 10-30% under favourable conditions.

These sails were not the primary source of propulsive power though. Even so, they were capable of moving these ships at low speeds without the use of the main engines. So not only did the sails reduce fuel consumption but they could also be used as a source of emergency propulsion if conditions were suitable. However when the oil crisis passed the viability of rigid sails in terms of fuel cost savings was undermined and only a small number of ships were fitted with them.

Recent advances in marine-grade solar cell and photovoltaic (PV) module technologies have led to solar power becoming a cost effective fuel reduction option on pleasure boats, passenger ferries and tourist vessels. Even so, although PV modules may be designated “marine-grade” by the manufactures, those to be used for ship projects need to be evaluated carefully to avoid problems after installation.

Based on the performance of PV modules currently available the amount of fuel that could be saved on a ship through the use of solar power alone is relatively small. Nonetheless there is scope to use solar power together with more energy efficient electrical devices such as low power LED lighting to improve energy efficiency and supply ships with an emissions free source of electrical power. 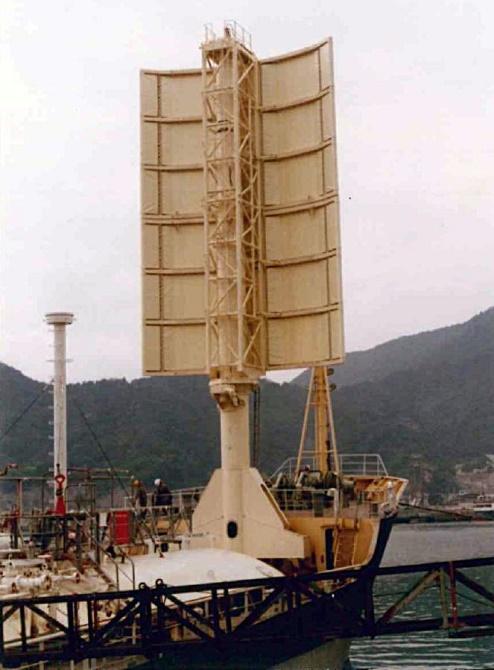 Rigid sail installed on a ship during the 1980’s. (Source: Teramoto Iron Works)

In Japan a solution has been devised by Eco Marine Power (EMP) that combines wind-assisted propulsion (WAP) with marine solar power and a computer control and automation system. This solution is known as Aquarius Marine Renewable Energy (or Aquarius MRE®). A ship fitted with Aquarius MRE will be able to tap into the limitless, albeit variable, power of the wind and sun. These hybrid powered ships will use renewable energy to supplement the power from the ship's main engines and generators thereby reducing fuel consumption and emissions. During a recent study for example it was estimated that rigid sails arranged as an array on a modified Panamax bulker with a total sail area of 1400 m2 could potentially provide on a voyage basis, an average of nearly 8% of the propulsive power required and under ideal conditions this surpassed 20%. This figure could also be significantly higher if the ship operated below 12 knots. Additionally this estimate only included the propulsive power derived from the rigid sails and not power obtained via the PV modules on the sails or solar panel arrays located elsewhere on the ship. 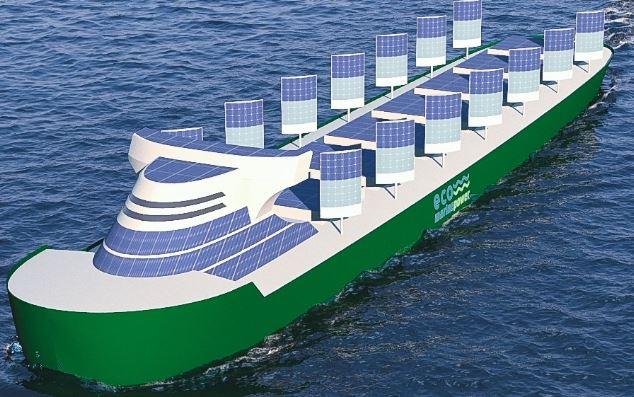 A core technology within Aquarius MRE is a patented rigid sail technology - the EnergySail®. This innovative device may incorporate a number of renewable energy devices and can be fitted as part of an array or as a stand-alone device. A lab prototype of the EnergySail has completed land-based feasibility tests including testing with the automated control system and a second factory produced EnergySail has been manufactured by Teramoto Iron Works in Onomichi, Japan. This second land-based device is being used for further shore based testing and demonstrations. Further patent applications related to the EnergySail are also likely as the design continues to evolve. 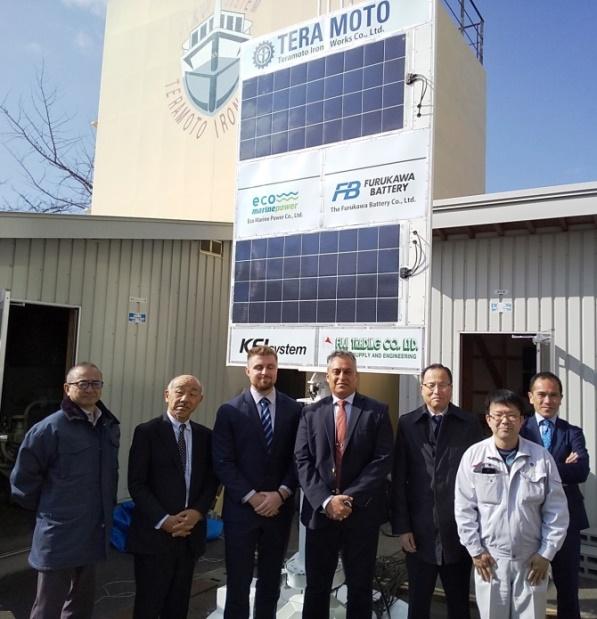 The marine solar power sub-system within Aquarius MRE is known as Aquarius Marine Solar Power. Components of this sub-system were installed on-board the high speed ferry Blue Star Delos as part of a joint evaluation project and a second upgraded marine solar power system has been installed on-board the large general cargo ship MV Panamana in cooperation with Zeaborn Ship Management (Singapore) and Masterbulk. This system utilised for the first time class-approved UB-50 hybrid batteries from The Furukawa Battery Company and the system was installed entirely by the ship’s crew. In the future other battery types might also be used including the FCR series due to their long life, safety and reliability. These valve-regulated lead acid batteries (VRLA) are recyclable plus less complicated and less costly to install when compared to lithium-ion batteries.

In late 2017 EMP announced that it was working towards sea trials of Aquarius MRE. These trials will bring together the complete system on-board a ship for the first time. Additional lab and shore based testing is also being conducted before these trials and variations of the system developed. Furthermore EMP and its strategic partners are currently working towards obtaining Approval-in-Principle (AIP) for Aquarius MRE from ClassNK and investigating what other technologies could be integrated into the system architecture. These other technologies may include fuel cells, air lubrication systems, electric propulsion and other renewable energy devices.

A number of challenges need to be overcome though before a solution like Aquarius MRE can gain widespread acceptance. These challenges include making the system rugged and reliable enough to be able to withstand the marine environment for many years with minimal maintenance required, integrating the solution with the design of ships so that the operation of the vessel is not adversely impacted and ensuring that the safety of the crew and the ship are not compromised. Organizational and cultural barriers also need to be overcome as shipping is often somewhat slow to embrace new solutions. However these barriers are being eroded as it becomes obvious across the industry that things must change and it’s likely that ships being built in future years will reflect this change.