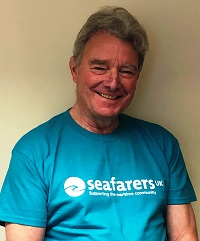 Commodore Barry Bryant CVO RN is to step down after 17 years as Director General of the Seafarers UK maritime welfare charity in July.

His final fundraising challenge is to abseil 100 meters down the iconic Spinnaker Tower in Portsmouth, UK on June 30.

Commodore Bryant said: ‘I was looking forward to going quietly after 17 enjoyable but fairly frenetic years at the helm, but as usual my team had other ideas! Fundraising has been perhaps the hardest part of the job, but so absolutely necessary if Seafarers UK is to take forward our many initiatives across the whole maritime community.’

Donations to Seafarers UK are invited at https://uk.virginmoneygiving.com/BarryBryant

Seafarers UK has been helping people in the maritime community for over 100 years, by providing vital support to seafarers in need and their families, and to those in education or training who are preparing to work at sea. The charity does this by giving grants to organisations and projects that make a real difference to people’s lives.