In keeping with maritime tradition, Port Canaveral’s new high-tech firefighting vessel Fireboat 2 was officially christened and commissioned into service during a ceremony at the Port that included state and local elected officials, area dignitaries, and representatives of fire rescue departments from towns and municipalities located in the Canaveral Port District.

“For the past four years our Port has prepared for the arrival of LNG-fueling of cruise ships. Having our own specialized fireboat operating here and available for every refueling operation underscores our commitment to safety and security for our Port and the surrounding communities,” stated Capt. John Murray, Port CEO.  “Fireboat 2 is the only one of its kind in all of Florida. We are thankful to our Brevard legislative delegation for their support of our Port, and for helping to keep our community safe well into the future.” 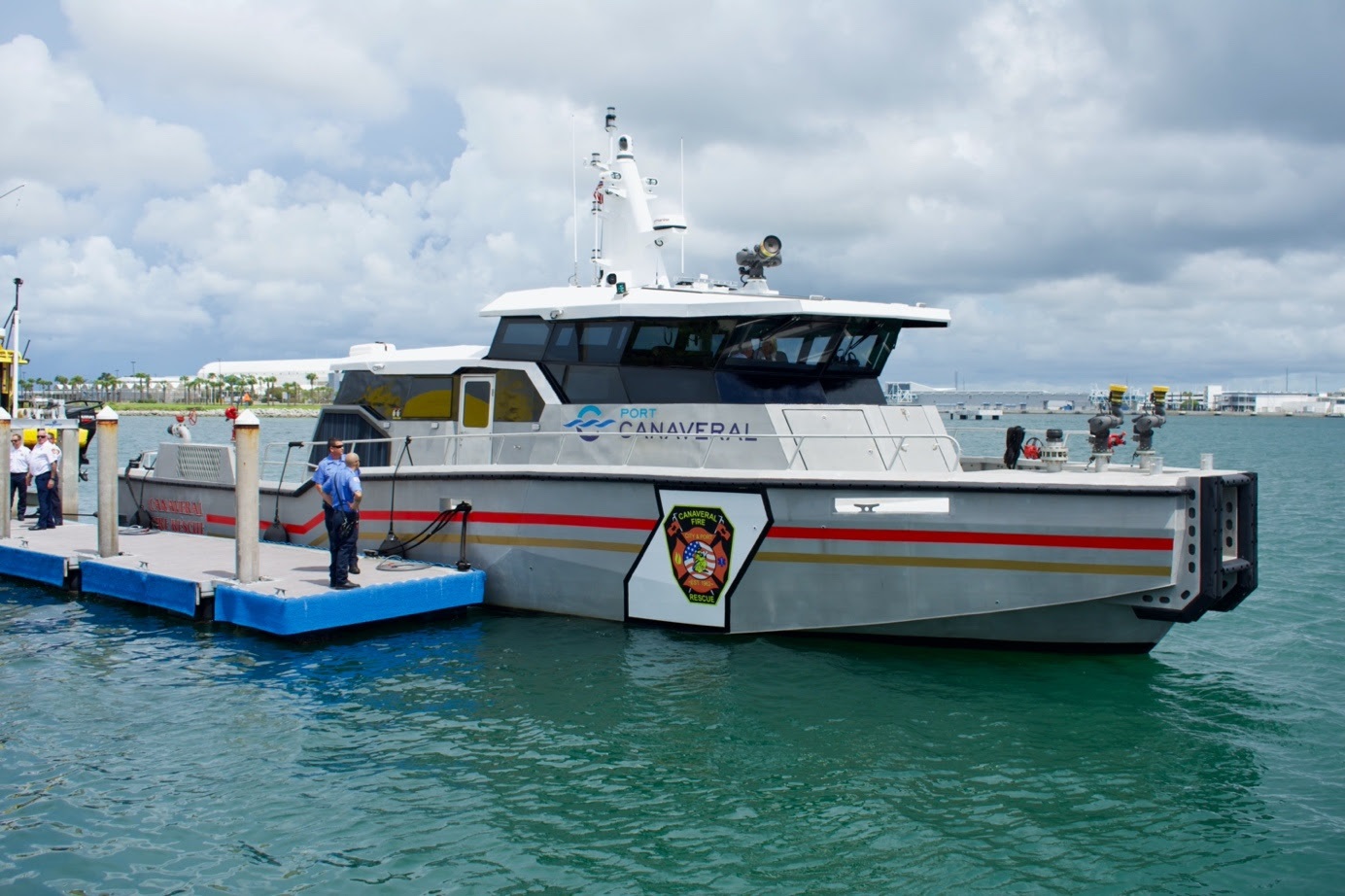 In her remarks to the assembled crowd prior to boarding the vessel to lead the christening ceremony, Senator Mayfield said, “The Port is growing rapidly and is a great partner for the economic development of the Space Coast, and I am honored to be part of the process, getting us to where we are right now.”

Florida State Fire Marshal, Division Director Julius Halas, attended on behalf of Florida’s Chief Financial Officer and State Fire Marshal Jimmy Patronis. Director Halas spoke about the enhanced firefighting abilities of Port Canaveral’s Fireboat 2. “This fireboat will not only protect those who are employed here, those who have their commercial enterprise here, but also the people who travel through Port Canaveral, which is vital to the cruise industry,” stated Halas.

CFO Jimmy Patronis offered, “You can’t predict fire emergencies. That is why it is so important that our fire service community has the tools and resources to protect Florida’s families, communities, and businesses. Fireboat 2 will greatly improve emergency response time, as well as serve as an on-scene command vessel for rescue missions. As the Port continues to grow and expand its operations, this fireboat will be an invaluable resource for protecting the port and surrounding communities.”

Fireboat 2 is maintained in a 24/7 ready state and operated for Port Canaveral by Canaveral Fire Rescue.  The highly specialized Marine Firefighting Rescue Vessel (MFRV) was custom-built for Port Canaveral by Jeanerette, La.-based shipbuilder Metal Shark. The model “70 Defiant” vessel provides enhanced marine firefighting and response capabilities to serve Port Canaveral’s expanding maritime and commercial space industry operations. The MFRV capabilities are a Port-wide and regional asset, available for immediate callout for all emergencies in the Port area. It enhances several National Preparedness Core Capabilities, including Fire Management and Suppression, Emergency Medical Services, and CBRNE Screening, Search and Detection. The MFRV will also be equipped with a communications system to function as an On-Scene command vessel for any maritime mass rescue operations.

Canaveral Fire Rescue Chief Dave Sargeant thanked the Canaveral Port Authority and elected officials for their support of the department’s mission.  “Fireboat 2 was built for the future and will protect people for twenty-plus years to come. It’s an honor to work at a Port that puts safety first,” said Chief Sargeant.

The 75-by-22-foot welded aluminum monohull pilothouse vessel has a total expected flow rate in excess of 8,500 gallons per minute and equipped with conventional and dry-chemical firefighting apparatus, along with a 500-gallon foam tank with gravity fast feed capability and a Purple-K dry-chemical firefighting system. The vessel also has an emergency medical treatment area on board and a communications system to function as an on-scene command vessel for maritime rescue operations.