Most people are familiar with the prefabricated modular cabin concept. The concept involves building the cabins separately from the ship or rig, usually on a continuous production line where the cabin is assembled step by step to a ready plug-and-play cabin unit that can be transported and installed as a complete unit onboard the vessel. This type of construction method has been utilized already for decades and the benefits are clear. Just to mention a few; improved quality and quality control, scheduling flexibility and reduced workload and logistics on board, as well as savings in both cost and construction schedule. However, not all shipyards have the infrastructure to house their own cabin factory, or they have chosen not to have one for other reasons.

The mobile cabin factory concept allows shipyards not having their own cabin factory to utilize the prefabricated cabin concept without major investments.

The technology of the assembly line itself is rather simple, which makes it easy to transport and set up. The art of perfecting production, however, is achieved by optimizing the design for efficient production, production planning, and handling the logistics chain.

For setting up the factory, a warehousing space with basic functions like heating, ventilation, and electricity is needed. The space needs to be big enough for the assembly line and for storing materials and the ready cabins. The optimal location for the cabin factory would of course be inside the shipyard’s premises, but as infrastructure often is the main limiting factor, this is not always possible. There are usually external warehousing facilities in close proximity to the shipyards with whom the shipyards already have good contacts, so finding something appropriate is seldom a problem. 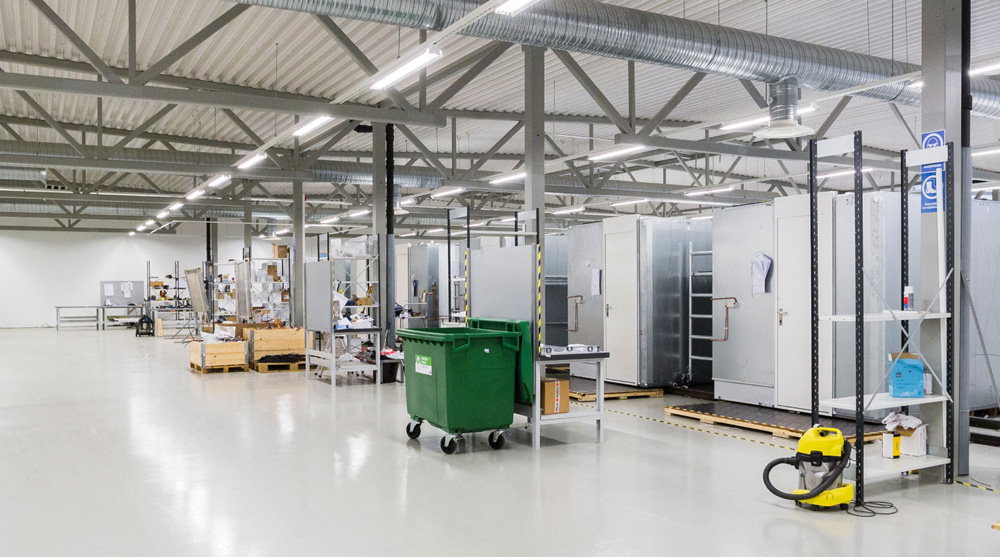 But what happens when there are no facilities nearby or the building location itself is challenging due to various reasons? Well, this is actually where the concept really shows its true potential. There is no place we can’t go – that doesn’t, however, mean that we need to be exactly where the client is building the ship or rig. It just means that we can be where it is the most feasible to be. If that means building cabins on another continent than the primary building location, then that is what we will do.

Regardless of being close or remote, the idea of the concept is to enable all owners and shipyards around the world to take advantage of modular cabin technology. When it comes to setting up and running mobile cabin factories, we at ALMACO have over 20 years of experience and countless projects with cabin prefabrication behind us. We are confident we can find the most feasible solution for any project.