The Value of a 3D Arctic Simulator

I took the image above through a rotating window in the wheelhouse during a terrific storm in the icy waters off Antarctica. The memory of this moment remains in my vision and has fuelled my belief that creating an international 3D virtual reality crisis simulator would be of great benefit to the industry.

Using such a simulator would combine rational knowledge with emotional response and thereby give students valuable experience in acting quickly and with timely care in an emergency at sea.

Such a crisis could be “Ice Right On” during very difficult sailing conditions in Arctic or Antarctic waters. The simulator would provide realistic scenarios depending on vessel capabilities – could it withstand a collision with just a small iceberg of granite-hard glacier ice (blue ice) in the open seas, for example? 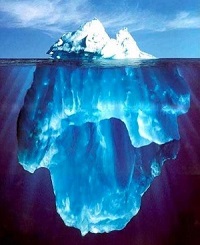 Let us now assume that the iceberg shown on the image to the left rises about five meters (16 feet) above sea level, and extends 45 meters (145 feet) below sea level - and let us guess that it weighs about 3,000 tons.

Such a small iceberg very likely could not be seen on the ship's radar systems in very bad weather because of sea clutter on the radar screen. It would also be very difficult to see this iceberg visually using a spotlight during a blizzard in the dark where the very high waves are covered with white foam. An emergency situation arises suddenly when the bridge watch team spots the iceberg a few hundred meters right in front of the ship. The crew must act quickly and with timely care.

Another scenario could be extrapolated from the picture to the right. This picture shows a floe of broken multi-year Arctic polar ice (pack ice.) 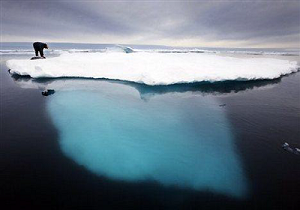 Note the person on top. Such hard granite-like ice, which at most rises approximately a meter (three feet) above sea level and extends perhaps 10 meters (33 feet) below the sea surface, can be extremely difficult to observe on the high seas, either visually or on the ship's radar systems.

Consider yet another mind experiment: A fully loaded ship, at approximately 140 meters (460 feet) long and with a deadweight of approximately 9,000 tons, on voyage from Copenhagen to Greenland is subdued in a storm. The wind has blown for three days with an average speed around the clock of approximately 25 meters (80 feet) per second. The ship surfs down from a wave crest and hits a small iceberg with the bow. Suddenly the ship is in an emergency situation. How will this collision affect the ship?

On summer days with calm winds and good weather conditions, the technical aids of the ship, such as radar and ice spotlights, are of invaluable help. But in fog or in the dark, there is still the need for quick decisions to be made to ensure the safe navigation of the ship. 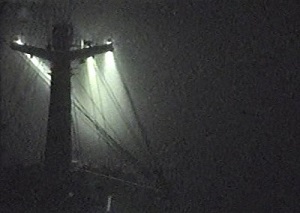 During autumn and winter, ships can experience blizzards, ice accretion or very high waves of up to 20 meters (65 feet). Then, the technical equipment on board is not always very helpful. No matter how much of the ice is above sea level, there is a need for sharp, trained eyes that can spot it in enough time to prevent a collision.

The crew’s qualification and training must be of a very high standard, particularly the navigator at watch, so that they can respond quickly and safely.

People who experience a sudden crisis for the first time can react very differently no matter how much technical rational knowledge they have acquired. Some are too emotional: others too calm and well-considered. A common feature is that no one knows in advance what their emotional response and action pattern will be.

Gaining the experience through simulation gives the person an understanding of their emotional reaction and physical action pattern. They gain invaluable experience for next time. Therefore, it is my vision that seafarers are offered training in ice sailing under turbulent conditions via a 3D virtual reality crisis simulator. In this way, they would learn to manage their emotions and gain valuable experience in how to react quickly and with timely care. Averting a polar disaster in the future could depend on it.

Bjarne Rasmussen is an ice navigator who has sailed in the Arctic and Antarctic.