The trade coverage of new import-restrictive measures introduced during the period (October 2018 to May 2019) was more than 3.5 times the average since May 2012 at $335.9 billion. This is the second highest figure on record, after the $480.9 billion reported in the previous period. Together, these two periods represent a dramatic spike in the trade coverage of import-restrictive measures, leading WTO Director-General Roberto Azevêdo to call on G20 economies to work together urgently to ease trade tensions.

Commenting on the report, Director-General Roberto Azevêdo said: “The stable trend that we saw for almost a decade since the financial crisis has been replaced with a steep increase in the size and scale of trade-restrictive measures over the last year. This will have consequences in increased uncertainty, lower investment and weaker trade growth.

“These findings should be of serious concern for the whole international community. We urgently need to see leadership from the G20 to ease trade tensions and follow through on their commitment to trade and to the rules-based international trading system.” 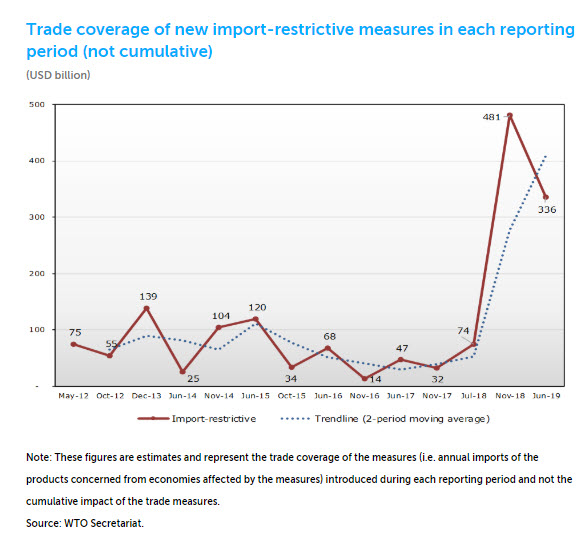 G20 economies implemented 20 new trade-restrictive measures between mid-October 2018 and mid-May 2019, including tariff increases, import bans and new customs procedures for exports. While fewer measures were introduced during this review period than in previous periods, the scale of those measures is much increased in terms of their trade coverage and the level of tariffs imposed.

During the period, 29 new measures aimed at facilitating trade, including eliminating or reducing import tariffs, export duties and eliminating or simplifying customs procedures for exports were also applied by G20 economies. The trade coverage of the import-facilitating measures implemented during the review period is estimated at $397.2 billion, 1.8 times higher than in the previous G20 Report. 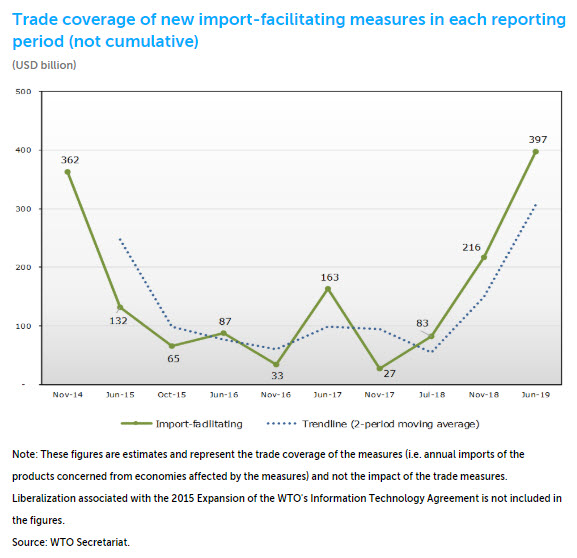