The world’s largest containership powered by liquefied natural gas (LNG), the CMA CGM Jacques Saade is continuing her record-setting maiden voyage making her first call in the UK at Southampton and in Northern Europe. With a capacity of 23,000 TEUs, the megamax boxship is completing its first run from Asia to Europe operating as part of a weekly service that consists of 13 calls over 84 days.

The vessel arrived in Southampton on its maiden call and first stop in Northern Europe. She had previously made her first call in Europe at Malta and will be proceeding to Dunkirk, Hamburg, and Rotterdam, before beginning the return voyage to Asia.

The CMA CGM Group’s new flagship, she set a new world record when she left Singapore with a load of 20,723 full containers. The last world-record load was set in May when HMM Algeciras departed Yantian with 19,621 TEU of cargo on board. The Algeciras holds the current title of the world's largest container ship, edging out the CMA CGM Jacques Saade and the MSC Gulsun with a nominal capacity of nearly 24,000 TEU. 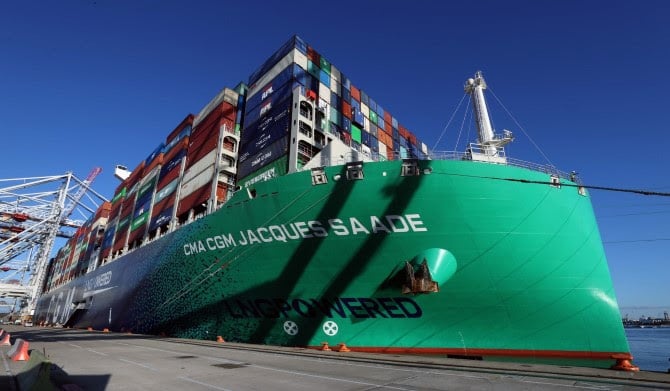 The product of more than seven years of research and planning, the CMA CGM Jacques Saade is the first of a new class of boxships for CMA CGM and at the leading edge of the effort to build bigger, more efficient containerships. She measures 1,312 feet in length and has an overall beam of 200 feet. Her height is 256 feet.

CMA CGM’s new class features state-of-the-art technologies, such as path prediction, smart eye projection technologies, and augmented reality screens to assist the captain and crew in navigating and docking the behemoth.   To improve their performance, the design incorporates a straight-shaped hull with an integrated bulb, redesigned propellers, and rudder blades, which contribute to improved performance by optimizing water flow and significantly reducing energy consumption.

The LNG tank also required significant engineering. The shipyard reports that it took nine months to build and install the LNG tank. It has a capacity of 18,600 cubic meters, giving the ship the ability to complete round trips between Asia and Europe between refills of the tank.

Each of the ships will operate with a crew of 25 plus one gas officer.  According to CMA CGM, the gas officer will be responsible for overseeing the process of gasification and pressurization of the gas. Stored in a liquid state, the natural gas is converted to a gaseous state to power the ship’s engines. This process must be adjusted depending on the speed of the vessel and the electricity consumption on board.

While the first ship of the class was on her maiden voyage, her sister ship the CMA CGM Champs Elysees also joined CMA CGM Group’s fleet after a naming ceremony conducted last week. Each of the nine vessels will bear the names of landmark Parisian monuments and other renowned venues and institutions, including Champs Elysées, Palais Royal, Louvre, Rivoli, Montmartre, Concorde, Trocadéro, and Sorbonne. CMA CGM expected to complete the introduction of the class of vessels by 2022.