Shell has produce a film about living on board the Prelude FLNG.

The facility is located 475 kilometers (295 miles) North East of Broome in Western Australia.

In June, the first shipment of LNG departed the facility destined for customers in Asia. The first cargo was loaded more than eight years after final investment decision and nearly two years after the facility arrived in Australia.

The Prelude FLNG facility will produce 3.6 million tonnes per annum (mtpa) of LNG, 1.3 mtpa of condensate and 0.4 mtpa of LPG. It is operated by Shell in joint venture with Inpex (17.5 percent), KOGAS (10 percent) and OPIC (five percent).

Australia already surpasses Qatar in LNG export capacity and exported more LNG than Qatar in November 2018 and April 2019. Within the next year, as Australia’s newly commissioned projects ramp up and operate at full capacity, the U.S. Energy Information Administration expects Australia to consistently export more LNG than Qatar.

Australia’s LNG export capacity increased from 2.6 billion cubic feet per day (Bcf/d) in 2011 to more than 11.4 Bcf/d in 2019. Australian LNG exports are expected to grow to 10.8 Bcf/d by 2020–21 once the recently commissioned Wheatstone, Ichthys and Prelude FLNG projects ramp up to full production. 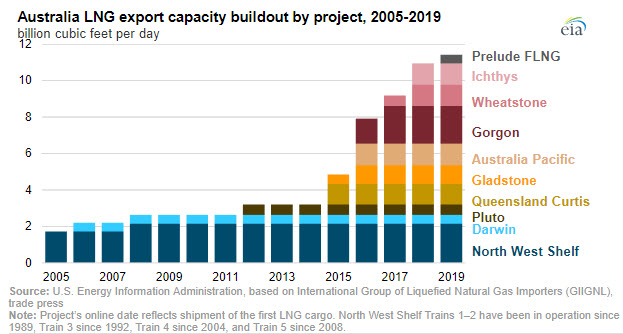 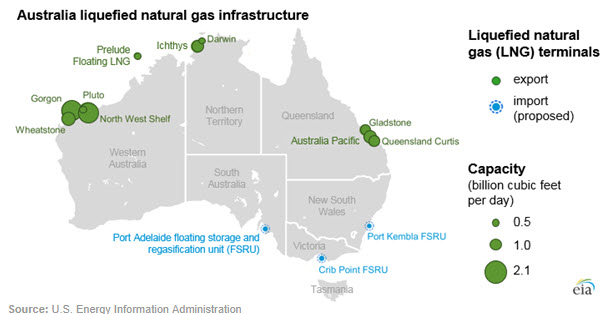 Prelude FLNG was the last of the eight new LNG export projects that came online in Australia between 2012 through 2018 as part of a major LNG capacity buildout.