As the efforts continue toward introducing a new generation of zero-carbon emission engines, Wärtsilä is reporting that that has made significant progress in a testing program with its fuel-flexible combustion engines. The Finnish engine manufacturer now expects to have a marine engine capable of running on an ammonia blend available this year as it proceeds toward a pure ammonia-fueled engine for the marine market and a pure hydrogen power system for the energy market.

The technology group Wärtsilä is working towards the adoption of hydrogen and ammonia as viable engine fuels through advanced testing with its fuel-flexible combustion engines. Full-scale engine tests have been recently carried out in Wärtsilä's engine laboratory in Vaasa, Finland, to assess the optimum engine parameters for running on these fuels. The company’s engines can currently operate on natural gas, biogas, synthetic methane, or hydrogen blends of up to 25 percent hydrogen.

“The test results are very encouraging, with one test engine performing very well when running on a fuel with 70 percent ammonia content at a typical marine load range,” Wärtsilä said in its announcement. “Tests were also completed successfully on another engine in pure hydrogen operation.” 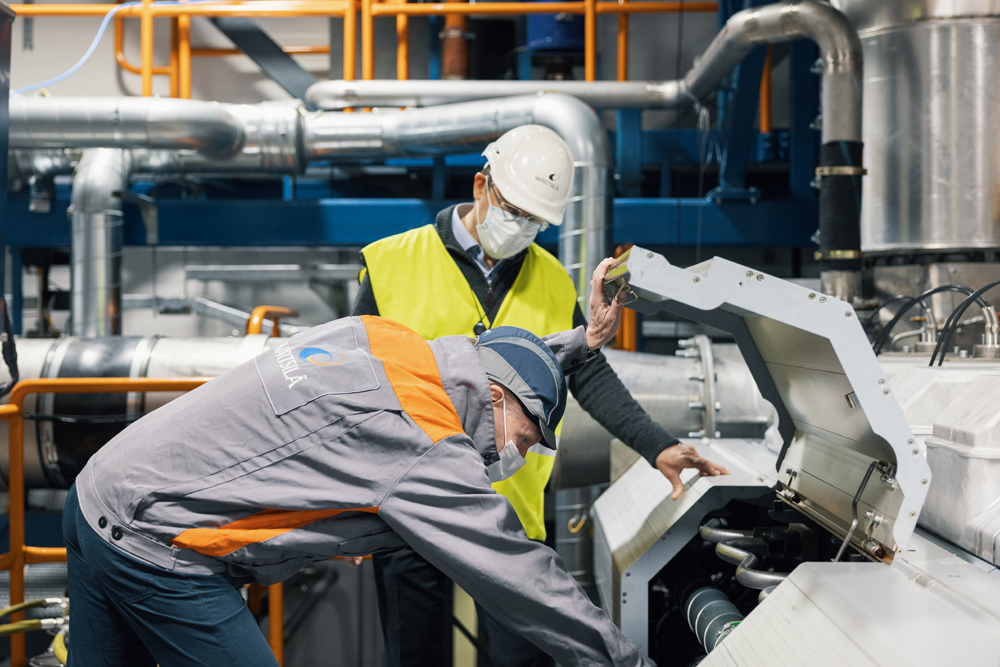 For the marine market, the company said it expects to have an engine running on an ammonia blend this year. They also anticipate having an engine concept with pure ammonia fuel in 2023. These efforts will also lead to an engine and plant concept for pure hydrogen operation for the energy market by 2025. Wärtsilä said that it anticipates that in the energy sector green hydrogen will deliver seven percent of the global energy demand by 2050.

“These are milestone moments in Wärtsilä’s transition to future fuels. Society will have to invest significant amounts into the infrastructure needed to develop green hydrogen, but those investments require market-ready engines that can run on the fuel once it is readily available,” said Håkan Agnevall, CEO of Wärtsilä. “The energy and marine industries are on a decarbonization journey, and the fuel flexibility of the engines powering these sectors is key to enable the transformation."

Wärtsilä said that its testing will continue with the aim of defining the most feasible internal combustion engine-based solutions for power plant and marine applications. Wärtsilä notes that it is following a fuel agnostic approach that enables the company to support the energy and marine sectors on how to shape sustainable, and efficient, future fuel strategies in several cost-optimal steps.

In addition, Wärtsilä will begin testing ammonia in a marine four-stroke combustion engine together with customers Knutsen OAS, Repsol Norway, and Equinor at the Sustainable Energy Catapult Centre in Stord, Norway. This part of the wider Demo2000 project which Norway is funding to promote collaboration between the Norwegian supplier industry and the oil and gas industry to ensure the development and application of new technologies that support the environmental goals.

Multiple research efforts are continuing across the industry and at major centers and universities, all focusing on developing carbon-free solutions for the maritime sector and the broader industrial sectors. Researchers recently reported progress in these efforts at running a hydrogen/ammonia mix in an LNG-type engine. Japanese shipbuilder Tsuneishi working with Belgium CMB.Tech also launched the world’s first 80-passenger ferry using engines fueled with a mix of hydrogen and diesel. They noted that the transition to pure hydrogen fuels also required the development of the infrastructure to support the fuels.

Wärtsilä highlights that it is also developing ammonia storage and supply systems as part of the?EU’s ShipFC project. The company says it has gained significant experience with ammonia from designing cargo handling systems for liquid petroleum gas carrier vessels, many of which are used to transport ammonia.