The cruise ship Viking Sun has departed what may well be the world's longest cruise - a 245-day westward voyage starting and ending in Greenwich. Most round-the-world cruises are completed in three to four months, but Viking's "Ultimate World Cruise" will take more than twice as long. In addition, berths are booked in two 120-day segments - unusually long increments for a circumnavigation voyage.

The record-setting itinerary will take the Sun to six continents, 51 countries and 111 ports, including 23 with an overnight stop. The route includes both coasts of South America, a string of islands in South Pacific, multiple ports along the coasts of New Zealand and Australia, a loop around the South China Sea, both coasts of India and a return to England via the Suez Canal. The Guiness Book of World Records is expected to certify the cruise as the world's longest upon the Sun's return to England. 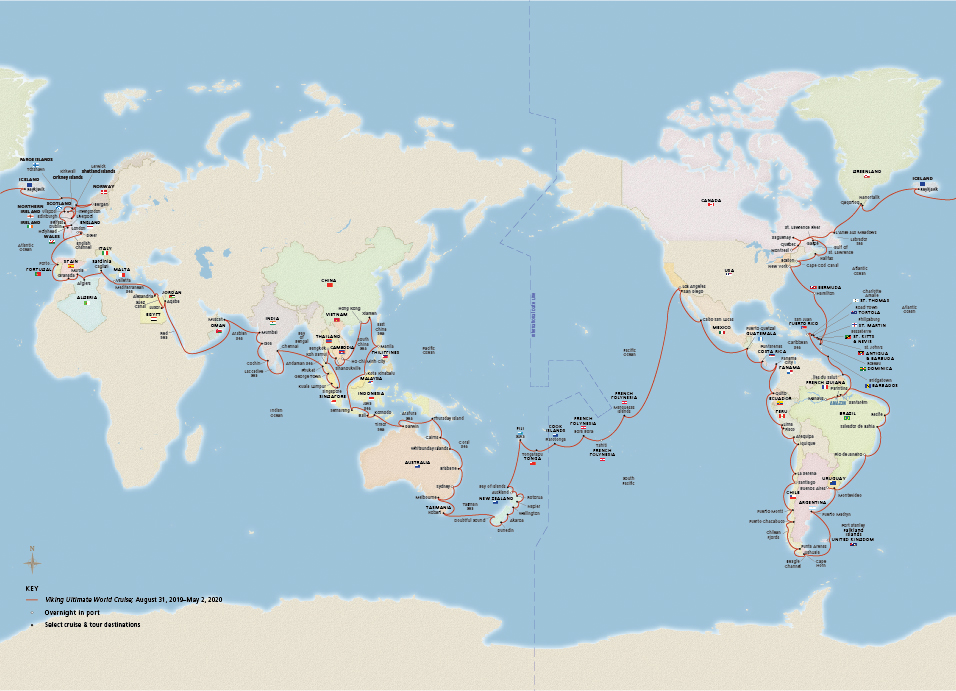 The cruise package is priced at $93,000 per passenger and up, including all meals and drinks, business class airfare and shore excursions. No children under 18 are permitted.

"Our Ultimate World Cruise is the most extensive itinerary available in the industry, nearly double the length of our previous world cruise itineraries. I am pleased to offer such a unique experience for our guests," said Viking chairman Torstein Hagen in announcing the cruise.

Viking Sun is a nearly-new vessel built in 2017, with 465 all-veranda staterooms and capacity for up to 930 passengers. She is not fitted with water slides, but rather with spas, libraries and a live theater.